“A STRONG CHECK AGAINST FOREIGN INFLUENCE” 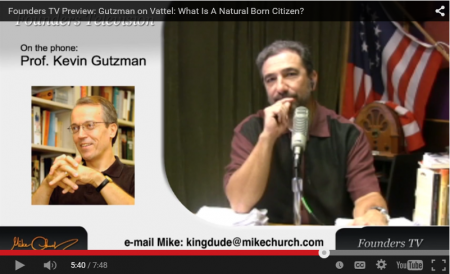 (Jun. 21, 2015) —[Editor’s Note:  In a 2013 video interview by Founders Television of Prof. Kevin Gutzman of Western Connecticut State University (WCSU), interviewer Mike Church asked Gutzman for his understanding of what has come to be known as the “natural born Citizen” clause believed to have been derived from Section 212 of Emmerich de Vattel’s “The Law of Nations.”

The clause was included in Article II, Section 1, clause 5 of the U.S. Constitution in regard to the president and commander-in-chief only.

I listened to Professor Gutzman’s comments in the above video. Here are my comments.

The purpose of having the term “natural born Citizen” as a constitutional requirement for future presidents and commanders in chief or our military was as a “strong check”, per John Jay’s letter to George Washington, against “foreign influence” on the person who would hold that office in the future. They wanted a person born with Sole Allegiance and Unity of Citizenship to the USA and only the USA. See this article for more on that point: http://puzo1.blogspot.com/2009/04/article-ii-natural-born-citizen-means.html They would never have wanted a person born with dual or triple citizenship and attendant multiple allegiances and foreign influences on them at birth to ever gain command of our military. As with anything dealing with our Constitution, if you wish to understand terms therein we need to go back to original intent and understanding as to why the founders and framers chose the words they did. We need to understand the Who, What, When, Where, How, and Why the term “natural born Citizen” was chosen by the founders and framers. The Why was they wanted a person with sole allegiance to the USA at birth, and only the USA, for future commanders in chief of our military.

Now some specific comments about what Professor Gutzman said and also what he omitted from Vol. 1, Chapter 19, Section 212 of Vattel’s writings. First, he does not give the full name of Vattel’s book. And that is important to the debate on its content. It was titled The Law of Nations or Principles of Natural Law.  “Natural Law” is key to this debate because the term under scrutiny is a natural law term, “natural born Citizen”.  Any legal term with the word “natural” in it refers to Natural Law and not to positive, man-made law. Vattel’s book was a treatise on Natural Law. And Natural Law forms the foundation of other types of law. And the founders and framers where keenly interested and aware of Natural Law as evidenced by the opening of the Declaration of Independence wherein it specifically cites the “Laws of Nature”, i.e., Natural Law.  And the Law of Nations was mentioned in the Constitution also in reference to defining Piracy. So the founders and framers were keenly aware of Natural Law and the Law of Nations.  And Vattel was their number one choice and reference on those subjects.

I own both a French and English copy of Vattel’s “The Law of Nations or Principles of Natural Law”. Regarding the comment that Vattel’s treatise The Law of Nations or Principles of Natural Law being written in French, the professor does not mention that most of the key founders and framers were multi-lingual and specifically they were fluent in French, which was the diplomatic language of that time frame.  The French were our allies in our Revolutionary War against England.  When he read part of the section 212 and he read the French word “naturels” he failed to acknowledge that that in 1781 the French word naturels, years prior to the writing of the U.S. Constitution in 1787, had been translated in treaty correspondence with the French to mean “natural born” in U.S. English. Thus the USA founders in U.S. English understood the term “the naturels” when used in the context of discussion of the matter of Citizenship in the USA or in the case of England being a Subject of the King, they translated the adjective and term and understood it to mean “the natural born”.  See: https://cdrkerchner.wordpress.com/2015/04/17/absolute-proof-the-founders-knew-and-accepted-vattels-french-naturels-to-mean-natural-born-before-constitution-was-written/

It also should be noted that the very title of Vol. 1, Chapter 19 in which “natural born Citizen” is defined, is “Des citoyens et naturels” which in the USA meant to the founders and framers, “The natural born Citizens”.  They got the idea and meaning of “natural born Citizen” from Vattel and other writers in Europe of the Enlightenment. They did not look to English Common Law to define and understand the citizenship terms in our new federal Constitution and Constitutional Republic. They discarded English Common Law when it came to Citizenship in the new nation. They looked to Natural Law and the Law of Nations to found our new form of government, a Constitutional Republic, and to determine who would be its initial citizens and the subsequent natural born Citizens, i.e., the children born in the country of citizens (both parents, born or naturalized).

In the cases of Obama, Cruz, Rubio, and Jindal the citizenship of their father when they were born is clearly a relevant issue. None of them had a U.S. citizen father at the time of their birth and thus they are not “natural born Citizens” of the USA to constitutional standards. In addition, for the case of Ted Cruz he was clearly and admittedly not born in the USA either in addition to not having a U.S. Citizen father when he was born. Thus Cruz misses natural born Citizen of the USA status on two counts.

Read and learn the constitutional citizenship status for all our Presidents since the U.S. Constitution was adopted: https://www.scribd.com/doc/48856102/All-U-S-Presidents-Eligibility-Grandfather-Clause-Natural-Born-Citizen-Clause-or-Seated-by-Fraud

Only the Laws of Nature can create a “natural born Citizen”. No man-made, positive law such as the Act of Congress Title 8 Section 1401, adopted pursuant to its naturalization power granted to it under our U.S. Constitution can do so. That law does not even mention “natural born Citizen” nor does the word “natural” appear in it anywhere. Those who conflate “Citizen” at birth created by man-made laws such as Title 8, Section 1401 with the natural law term “natural born Citizen” at birth, are being illogical and are spreading confusion and disinformation. See this link for more on that: https://cdrkerchner.wordpress.com/2012/06/20/of-natural-born-citizens-and-citizens-at-birth-and-basic-logic-trees-are-plants-but-not-all-plants-are-trees-natural-born-citizens-nbc-are-citizens-at-birth-cab-but-not-all-cab/

The professor in his 2013 interview was carefully picking and choosing words, and ignoring others, in his readings and discussions about Vattel’s book/treatise to try and make the case that Obama and Cruz are constitutionally eligible. They are not.

As to English translations, there was a prior English translation of Vattel done circa 1759/1760 in England that Professor Gutzman did not mention. However, the 1797 is considered the better translation. But the founders and framers were using the 1775 edition edited by Dumas which was in French, as attested to by Benjamin Franklin. See: http://puzo1.blogspot.com/2010/04/benjamin-franklin-in-1775-thanks.html In regards to the 1797 English language translation which correctly translates Vattel’s des naturel Citoyen to “natural born Citizen”, the 1797 edition was just confirming and clarifying what the world at that time knew as to what Vattel meant and as was implemented in the U.S. Constitution several years before. And it was widely used in the new and great constitutional republic in the new world., the USA. And it was used to defend the rights of U.S. natural born Citizens in the disputes with England on the high seas leading up to the war of 1812.

Do words come into existence and meaning only by their instant creation in a dictionary or legal writings first and only then at the exact time of printing said book. Or were they there and understood before that print date and in use for some time in society? Use common sense.

The 1797 translation of Vattel’s treatise into English simply was an improved translation from the original French and it confirmed and clarified to English speakers and readers what Vattel meant by his term “Des Citoyens et naturels” and/or naturel Citoyens, and his definition of same is therein clearly written. And the founders and framers knew and understood what it meant and that Vattel was their source when they chose the term, natural born Citizen. The 1781 treaty negotiations translation I mentioned previously prove that. When it came to the U.S. Supreme Court cases in the first 100 years of the USA they clearly looked to Vattel’s writings on issues of Citizenship, quoting him literally in a couple cases, and saying in at least one case that Vattel was the best on the matter of Citizenship issues.

See: http://www.art2superpac.com/issues.html for some example cases.

Now the Pandora’s box is open and we have people not even born in the USA and with non-U.S. citizen fathers and twisting words and conflating two different legal terms and arguing they are eligible to be President and Commander in Chief of our military.

For more on the term “natural born Citizen”, see the prior historical  and legal writings on the term and also my writings on that term at:  http://www.art2superpac.com/issues.html and https://cdrkerchner.wordpress.com/2012/06/20/of-natural-born-citizens-and-citizens-at-birth-and-basic-logic-trees-are-plants-but-not-all-plants-are-trees-natural-born-citizens-nbc-are-citizens-at-birth-cab-but-not-all-cab/  and https://www.scribd.com/collections/3301209/Papers-Discussing-Natural-Born-Citizen-Meaning-to-Constitutional-Standards .  Also watch this video by the renowned constitutional scholar Dr. Herb Titus — Part I: http://www.youtube.com/watch?v=esiZZ-1R7e8 and Part II: https://www.youtube.com/watch?v=xoaZ8WextxQ Also see these papers and writings on Vattel’s influence of the founders and framers: https://www.scribd.com/collections/3224507/Vattel-s-Influence-on-U-S-Founders-Constitution-s-Framers

Note:  The video can also be viewed on YouTube.