(Jun. 20, 2015) — On Tuesday, June 16, Tennessee Department of Corrections (TDOC) prisoner #304285, Timothy Aaron Baxter, appeared at a pre-trial conference in Jackson, TN for his federal lawsuit filed for injuries sustained after two correctional officers assaulted him with an axe on September 11, 2009 at the West Tennessee State Penitentiary (WTSP).

Known as the “Henning” facility, WTSP states on its website that it “provides a secure environment along with educational and vocational opportunities.”

Former Tennessee state prisoner Mike Parsons reported that he, also, was assaulted while at WTSP and incurred hearing loss in one ear as a result.

Baxter is currently an inmate at the Northwest Correctional complex (NWCX) in Tiptonville, the same institution housing CDR Walter Francis Fitzpatrick, III (Ret.).  The lawsuit was filed after Baxter regained his freedom from an initial multiple-year incarceration following his arrest on what appear to be invented charges of operating a methamphetamine lab at a friend’s house.

A relative of Baxter’s reports that he was a talented, upcoming musician prior to the first false arrest.  Baxter told The Post & Email in an interview that he was at the home packing up his drumset when sheriff’s deputies from Dickson and Madison Counties arrived without provocation, arrested him and booked him into the Madison County jail, where he was later assaulted for the first time.

The Madison County Circuit Court Clerk, Kathy Blount, has not returned phone calls from The Post & Email regarding how to obtain documents in Baxter’s cases.  Approximately nine days ago, in what began as a cordial phone call regarding purchasing audio and typed transcripts in general, “freelance” court reporter Amy Mays hung up on this writer, and Candy, administrative assistant to Judge Roy B. Morgan, who presided over Baxter’s cases, informed us that she does not possess the records we were seeking.

The final email of a series from The Post & Email sent to Tennessee Administrative Office of the Courts (TAOC) spokeswoman Michele Wojciechowski on obtaining transcripts, which have been deemed “public information,” then ensued as follows:

Do you know whether or not the TAOC has a “written policy” regarding the release of audios and typed transcripts?

The transcriptionist said that the judge said he could not release the audio without a written policy from you.

I’m told to call the court clerk, Kathy Blount, who I called several months ago and who doesn’t return phone calls.  Her email address posted on the county government’s website does not work.

What, then, does one do to get an answer?  Is this the way courts in your state work?

Wojciechowski never responded.  Two other requesters who reside within Tennessee have also been stonewalled in obtaining the transcripts.

Baxter’s lawsuit, #10-02667, filed in the U.S. District Court for the Western District of Tennessee, alleges civil rights violations under 42 USC 1983 and a violation of his Eighth Amendment rights. The filing names “Officer Arthur Mallory,” “Officer Robert Moffatt,” and “Sergeant John Moffatt,” the latter of the “Deputy Warden’s Office,” as defendants.  The State of Tennessee and the TDOC were withdrawn as defendants on November 17, 2011.  “Officer John Doe” is also named as a defendant.

Baxter, who was reported to us as seriously ill more than a week ago, is defending himself, while the defendants’ representation is provided by three taxpayer-funded attorneys from the Tennessee Attorney General’s office.

On page 3 of the filing, Baxter describes the assault: 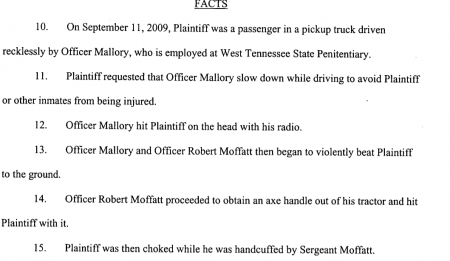 In a telephone interview with The Post & Mail in early May, Baxter informed The Post & Email that he has virtually lost the use of his left arm, that he suffers from constant migraine headaches, ringing in the ears, and that his right wrist is “useless” as a result of extremely tight handcuffs following the attack.  He is asking for $5,000,000 in compensation and a jury trial.

Although first assigned to Judge S. Thomas Anderson, the case was “referred to” a magistrate judge, Tu M. Pham.  Recent motions in the case, however, bear Anderson’s signature.

A “minute entry” dated June 16, 2015 following the conference reads, “Minute Entry for proceedings held before Chief Judge J. Daniel Breen: Pretrial Conference held on 6/16/2015. PRESENT: Pro Se Plaintiff, Timothy Aaron Baxter and Jennifer L. Brenner and Rebecca Lyford for the Defendants. The Court discussed additional witnesses that the Plaintiff would like to add to the list. The parties were directed to get together and agree upon which exhibits to include and the ones that are uncontested and submit to the Court…” 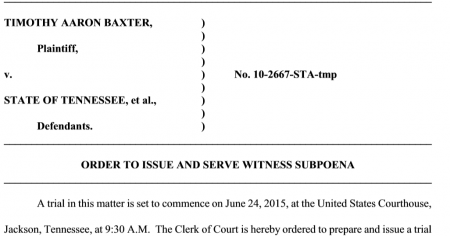 In an email following the June 16 proceedings, Baxter’s father related of his son’s pro se defense:

He appeared in Federal Court yesterday and represented himself well IMHO. He was weak, appears mal nourished, and he had trouble speaking because of the soreness in his jaw. I wept when I saw him and I started to weep as I write this…..but we have to carry on no matter how hard it is.

This was to the best of my understanding a pre-trial hearing for the beating injuries he suffered at the hands of the guards during his first incarceration with a trial to be scheduled. I felt so sorry for my son having to face a federal judge….but then I was very proud of how he conducted himself through the process and to my amazement the judge afforded him due respect . the judge did say this has dragged out long enough and  needs to go to trial.

I am encouraged that the Judge did not dismiss the case nor did he treat it as frivolous…..although I am afraid if this does go to trial the states lawyers will destroy the case Tim has built simply because of his lack of the ability to locate witnesses and get access to documents…..for instance they spent a lot of time debating a “description” of an area where an alleged video was taken and whether there  were 2 video tracks in the beginning but now the state claims there is only 1 track ….etc

We are still concerned about his health and will continue to press on for his release. This prison and “injustice” system should be national news. Many citizens are being punished and exploited without due process, convictions based on coercion of witnesses by the DA. harsh sentences that do not fit the crime.

This has been a very emotional week, seeing my son in his rapidly deteriorating health, and drudging up the horror of the last 12 years that he has suffered.

The Post & Email has recently contacted TDOC spokeswoman Neysa Taylor twice on Baxter’s behalf regarding his need for medical care outside of NWCX.

Additional documents signed by Anderson since the pre-trial hearing detail additional witnesses to be called, undisputed facts and disputed allegations.

A pre-trial order dated June 19, 2015 lists equipment to be used by both parties, exhibits, and a statement that “It is estimated that this trial will last 1-2 days.”

Two amended orders were then issued, the second of which can be read here:  Baxter Second Amended Order 06-19-15

Will There Be Justice for Timothy Aaron Baxter? added on Saturday, June 20, 2015

One Response to "Will There Be Justice for Timothy Aaron Baxter?"