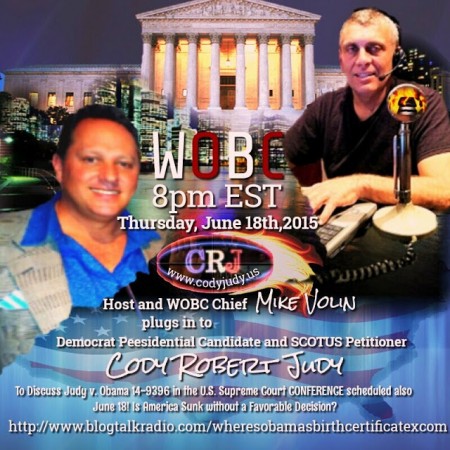 (Jun. 16, 2015) — Cody Robert Judy is the only Presidential Candidate in America who has a “Bi-Partisan” Record in Federal Courts filed to protect the ‘natural born Citizen’ Clause for the Office of President. The 49-year-old 2016 Democratic Presidential Candidate has 15 Civil Actions in Court since 2008 that include McCain and Obama.

Cody majored in Psychology at Utah State and is the author of Taking A Stand – The Conservative Independent Voice; His Blog with over 530 entries and 240,000 views is www.codyjudy.blogspot.com, and his website www.codyjudy.us

He has been the C.E.O. of multiple businesses for 15 years and grew up ranching and farming. Cody is a family man, the father of four children. He enjoys writing music, producing 6 Albums in The Cody Robert Judy Band. Cody has run a full marathon, and enjoys golf where he also has been a professional on the old PGA Nation Wide Tour.

In the service of our country and the Constitution, Cody has dedicated a large chunk of his life to preserving, protecting, and defending what he calls the nuclear center of the U.S. Constitution in the qualifications for the Office of the President. He also ran for Congress and U.S. Senate but has never been elected, many say because of his true stands for Principle over Party.