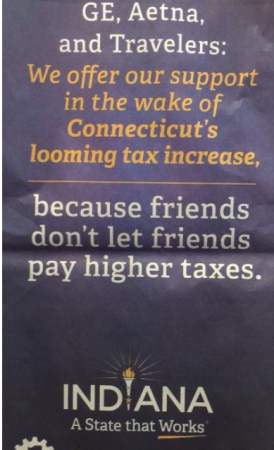 (Jun. 13, 2015) — The Hartford Courant and other outlets have reported that General Electric (GE) CEO Jeffrey Immelt is researching the possibility of relocating from its headquarters in Fairfield, CT to another state “that allows business to be competitive” in the wake of the budget passed by the Connecticut General Assembly on June 3.

In 2011, Immelt, who has chaired Obama’s Council on Jobs and Competitiveness since January of that year, relocated the health care of GE’s business to China.  According to an article in The Huffington Post dated January 21, 2011, Immelt was “asked to guide the White House as it attempts to jump-start lackluster job creation and spur a muddled recovery.”

Like Obama, Malloy has spoken of “shared sacrifice” and “fairness.”  Now in his second term after a close election with businessman Tom Foley in both 2010 and 2014, Malloy continues to support the “unitary tax” in the budget which was proposed but not passed in 2011.

On Twitter on Friday evening, the Connecticut Business and Industry Association (CBIA) expressed its displeasure with the tax increases.

The Connecticut Speaker of the House is Brendan Sharkey, while the State Majority Leader is named Martin Looney. According to Connecticut News Junkie, Sharkey believes the budget is “great.”

On June 3, the day it was passed, State Sen. Len Fasano (R) said on the floor of the chamber that Republicans were “locked out” of the process.  “I want to have a place where we have a fair debate,” Fasano said after reporting that House Democrats remained in their chamber “going on 40 hours with three hours’ rest…,” characterizing the marathon session as “You stay here ’til you vote my way, or go home.”

In 2011, Malloy signed the largest tax increase in the Constitution State‘s history.

On Friday, Connecticut Sen. Minority Leader Pro Tempore Kevin Witkos opined that Malloy should veto the legislation and “start over.”  Editorials published in The Courant and The New London Day advocated that legislators revisit the bill and include Republicans in the deliberations.

Also included in the proposal are a cap of the personal property tax on vehicles at a 32 mill rate to offer individual taxpayers relief.  At present, Connecticut is ranked fourth-highest in property taxes, has a 6.35% sales tax (raised in 2011), collects excise taxes on gasoline and alcohol, and taxes income.

In response to the proposed budget and corporate objections, Indiana Gov. Mike Pence, who Malloy had called out as “a bigot” after he signed a Religious Freedom bill in late March, invited GE, Aetna and Travelers to relocate there both publicly and privately.

Among a media, corporate and state-government firestorm, most notably from Malloy, Angie’s List, Wal-Mart and members of the sports and business communities, Pence was pressured to ask the Indiana legislature to “fix” the bill to clarify that certain people would not be the object of discrimination.

Until 2013, GE owned NBC News and NBCUniversal, among many other companies and subsidiaries.

“Back when he agreed to advise the Obama administration on economics, General Electric CEO Jeff Immelt told friends that he thought it would be good for GE and good for the country. A life-long Republican, Immelt said he believed he could at the very least moderate the president’s distinctly anti-business instincts.

“That was three years ago; these days Immelt is telling friends something quite different…

“Friends describe Immelt as privately dismayed that, even after three years on the job, President Obama hasn’t moved to the center, but instead further left. The GE CEO, I’m told, is appalled by everything from the president’s class-warfare rhetoric to his continued belief that big government is the key to economic salvation…”

The Jobs Council was created by Obama before he took office.

In February of this year, Obama appointed Malloy to co-chair the Council of Governors, whose purpose is to “strengthen the partnership between the federal and state governments.”