“OUR COUNTRY IS BEING DISMANTLED FROM WITHIN” 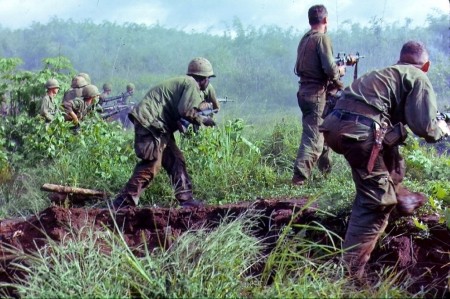 House lights dim to their dimmest as the curtain rises on a mountain slope increasing from left to right. It is night with a new moon. The sky is clear and you can see every star in the sky. The stage setting is lit so dimly as to barely be able to make out the 12 actors, who are dressed as American combat infantry. The men are scattered behind rocks and crevasses. Center stage, front, is the squad leader, a sergeant, his runner, the corporal, and a PFC manning the radio.

Corporal: “But, Sir, we can see them down there, clear as day. Why can’t we pick them off, one by one?”

Sergeant: “Look, I told you. First, any move we make, it’s got to be on CNN or any of the other shows.

“Remember what happened last week, when we got those replacements for that ambush that we walked into, when Miller and Warshawsky bought the farm? And we went on ahead and killed those seven enemy combatants? Well, their families sued the Army because we didn’t wait for the news of our replacements to get on television, thereby failing to warn the enemy we were back to full strength.”

Corporal: “But that’s, pardon my French, stupid. Imagine General George Patton refusing to come to the aid of Bastogne because Adolf wasn’t informed? Or Eisenhower retreating off the beaches in Normandy because Hitler was still asleep?”

Sergeant: “Can it, Corporal, I’m on your side.”

Corporal: “That’s great, that’s just great. Now I’m safe. I’m sure my wife and daughter will want to thank our Commander-in-Chief for his total incompetence. Is this the future? Are we just out here as cannon fodder, is that it, that the more of us killed means the more successful we’re supposed to be?”

PFC: “Sir, I’m getting a message.” Hands a second pair of headphones to the Sergeant. Sergeant holds up a hand for the corporal to be quiet.

Sergeant: “Okay, pay attention. Here’s the straight skinny. Pass the word. We’re pulling out come sunrise. Headquarters, report that because we’re to be out of this Godforsaken pile of rocks by the end of 2016; we’re not to, and this is from the horse’s mouth, from Command, ‘Not to inflict casualties on the enemy-that-cannot-be-named’, I kid you not. The ‘I kid you not’ was mine, so don’t go around saying that High Command said the ‘I kid you not’, you read me?”

Curtain lowers. End of ACT I.

Curtain rises on a Congressional hearing. The lighting is bright. The dais is to the left while the ‘grilling table’ is to the far right. Seated at the table are men in elaborate uniforms with medals from shoulder to the floor. The Admirals’ hats have 3’ ostrich plumes. The men and women at the dais are the senior of the senior members of Congress. One of them picks up the gavel, with the assistance of the person sitting behind him, and bangs away.

Chairman: “That’s enough, John, you can take the gavel away, please. Thank you.

“Welcome to our hearing. This hearing is about the Administration’s habit of broadcasting all of our military information to our yet-to-be-named-enemy.

“Some say that it’s not fair for our troops to broadcast our intentions, while some say that we should play fair because we have the upper hand.

“General Murphy, I have a report saying that the orders from High Command were treated by the troops as some sort of joke, and any order that came across was greeted with ‘I kid you not’.

“For example, I have a recording of a set of orders being transmitted to a Navy destroyer. John, please run the tape.

“Uh, Rubber Duck, you are to rendezvous with an IDF gunship at 1700 hours. You copy?”

“It is my understanding, General, and correct me if I’m wrong, that the phrase, ‘I kid you not’, is basically highly disrespectful to the chain-of-command, specifically to the Commander-in-Chief. Isn’t that right?”

General: “Well, I wouldn’t put it in such strong terms.”

Chairman: “You wouldn’t? I understand it all started with you guys, and now even the Navy says it, as we just heard. What have you got to say?”

General: “Well, now, if I were allowed to speak the truth rather than follow the talking points that your committee sent me last night, I’d say that the ROE’s for our troops are even worse than we had in Vietnam.

“In Vietnam the troops said, ‘What’s in it for me?’ in response to orders.”

Chairman: “Excuse me, General, but can you give us an example?”

General: “Be glad to. It started even in Boot Camp (Basic Training). The response was, to the order, ‘Full packs, out on the grinder for a ten-mile walk’ was not really a walk but a grueling ten-mile run, and the response was ‘What’s in it for me?’ It’s expected for the troops to gripe.

Chairman: “So, according to what you just said, disrespect to the Commander-in-Chief is to be expected, even tolerated? I find it hard to believe that.”

General: “I don’t care what you believe. Your sending what I can and cannot say via your talking points last night is a violation of my Constitutional rights. You want me to lie down and go along with the program.”

Chairman: “And what program would that be?”

General: “To deliberately and systematically render the military incapable of doing the job for which we have them. Our country is being dismantled from within. Look at our military: homosexuals allowed to serve, Muslims within our ranks. Look at what happened to Seal Team 6 and Ft. Hood.

“The Rules of Engagement are such as to make our troops sitting ducks, and it’s been that way since the day the usurper, Obama, took office. That’s why the good ones are getting out, leaving the service as soon as their time is up. A lot of them wanted to make the military their career, but not with this Commander-in-Chief. Our military is bleeding dry. Those who we need to stay in are getting out.

“We in the Joint Chiefs of Staff are just as guilty as those in Congress or for those running for the office of president. We ran from the question of eligibility and, by doing so, we let an honorable man, LTC Terry Lakin, be dishonored by a Dishonorable Discharge, to our everlasting shame.

“It is taught that those in charge are wholly responsible for the well-being of the troops under them, and the lowest in the totem pole in the hierarchy of our military are the squad leaders. Once we lose the squad leaders, the ones who take their Oath to the Constitution who are willing to die for it and not just some lip-service…once we lose them, it’ll be the end of our military and the birth of SS Troops working on behalf of the Executive Branch exclusively.

“Yes, shame on me, the Joint Chiefs, Congress and everyone who isn’t a Birther; I kid you not.”

Lights on the stage are extinguished. Curtain lowers.

One Response to "The Squad Leader pb"