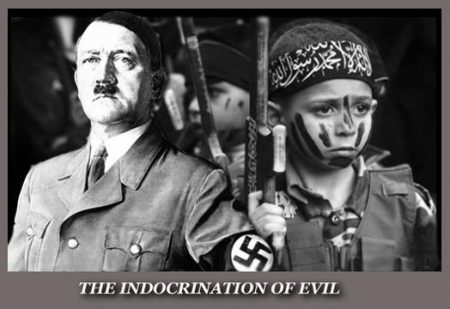 (Jun. 8, 2015) — Anti-Semitism is growing among German Muslim students. Following Koranic teachings, the early childhood brainwashing, and school books rife with politically biased indoctrination, these students openly declared that they will kill Jews, specifically threatening Max Moses Bonifer, student spokesman for the school system in Offenbach, Germany, a city of more than 16,000 Muslims. Teenage students in Landsberg, near Leipzig, were reported to be using Nazi slogans, and greeting “Heil Hitler,” with some sporting Hitlerian moustaches. Yet, despite the increase in anti-Semitism, Muslim and other immigrant students were exempted from partaking in the concentration camp visits required with the Holocaust educational programs.

”Severe intolerance and hatred does not happen overnight,” explains Dr. Tawfik Hamid, himself under threat from his co-religionists for teaching a peaceful understanding of Islam. “The indoctrination process, incremental and subtle, occurs in three stages – hatred, suppression of conscience, and desensitization to or acceptance of violence.”  It is completed when the formerly young and innocent are capable of violence without remorse, no different than the Muslims who attacked synagogues in Germany after Israel’s “Operation Protective Edge” against Hamas, or the Nazis who participated in the Kristallnacht pogrom of November 10, 1938.

The hate and intolerance of the Koran is reinforced during prayers five times daily.  Beginning in early childhood, toddlers are taught to behead dolls, and young men delight in the worst animal cruelty that Australians have ever witnessed being done to their exported cattle.  Films from Gaza show Palestinians “kneecapping” the cattle, stabbing their eyes, and hacking their throats open on the streets.  Severe animal suffering precedes the slaughter of animals for the celebration of Eid Al-adha or Feast of Sacrifice (it also generates an extraordinary cash windfall for some of Pakistan’s most dangerous militant groups).

These Muslim German students, along with their agitating professors, should be learning about the Holocaust through newsreels, books, and visits to the concentration camps.  The excuse that their culture had nothing to do with this period of history is both untrue and irrelevant; history shows that Arabs were in lockstep with the Nazis. Islam, like Nazism, is an ideology that teaches superiority and subordination, consigning slaves, women, Jews, Christians, Zoroastrians and others to different levels of humiliation and wretchedness.  It is their theological imperative that Jews (and Christians) be subservient to Muslims; the success of infidels is an insult to Allah.  Therefore, the chants and false accusations of “settlements,” “apartheid,” “colonizers,” “occupation,” are diversions and keywords needed to trigger hatred and violence against Jews and Christians worldwide, as they have throughout their history.

Mohammed’s wrath began with the Jews, who remained faithful to the Torah and rejected the Koran – with its more than 100 verses advocating the use of violence to spread Islam, and 123 verses about killing and fighting. It continued when Muslims encountered the formidable Christian opposition in Eastern and Western Europe. Massacres were conducted when Christians primarily (but Jews, as well) earned “too much” wealth and power in Granada (1066), and when Christian communities in Middle Eastern countries identified with Crusaders.  Muslims killed the Mongols, who had earlier destroyed their caliphate, together with their Christian and Jewish collaborators.  Envy was a consequence of their teachings, causing Muslims to rage and slaughter when they noted the superior economic status of Christians in the 18th and 19th centuries.

Therefore, in 164 verses, the Koran encourages jihad and looting from their victims, so that they may own what belongs to their perceived enemy.  True to character, Muslims are unable to tolerate Israel’s superiority, the achievements of a mere 67 years of statehood.  It is not about settlements or deeds but a deep-seated envy, exemplified by the Khomeinist International Union of Resistance conference held in Beirut (May, 2015).  Resentful Muslim scholars came together to formally accuse Israel of all Islamic nations’ failures.  The attendees admitted that they wished to “counter the arrogant world,” a reminder of their shame for not achieving the greatness of the West, the greatness they’d been promised in their Scriptures.

In a warped attempt to reverse their feelings of inadequacy, Muslims destroyed the World Trade Center in New York, as well as antiquities, artifacts and shrines worldwide. To overcome their deficiency, they produced an extensive, extravagant museum exhibit that lays claim to “1001 Inventions, the Enduring Legacy of Muslim Civilisation,” many of which (perhaps all) may be traced to the ingenuity and industry of their conquered and forcibly-converted victims.

Islamists called Israel “arrogant” for being first responders to people who suffer from natural disasters (earthquakes, tsunamis, fires, famine) and for providing medical care to the victims of Islamic unrest (including surgery for Mahmoud Abbas’s wife and medical treatment for a Hamas leader’s sister).  They sent no humanitarian aid to the infidel victims, but accused Israel of harvesting organs of the dead in Haiti when, in fact, families showed their gratitude for their care by naming their newborns “Israel.”

These desert people, whose Sharia law, ironically, is named for “the way of water,” have just witnessed Israel’s new capability of recycling water, producing enough to make their land flourish with food, and having more than enough potable water for themselves and a generous supply for wasteful Palestinians, (more than required by the Oslo Accord. California is already using Israeli water technology to combat its worst drought in history.  Muslims are seething with resentment, yet the achievements that earn praise in the Islamic world are terrorist attacks.  They cannot stand to be upstaged, but hope only to be the “best” when everyone else is gone.

In a June, 1938 letter, the Syrian Alawites told the French prime minister that the new Zionists “brought prosperity over Palestine without damage to anyone or taking anything by force,” and American historian Walter Laqueur noted, “No one doubted that the Arabs had benefited from Jewish immigration.” (The Arab population almost doubled between 1917 and 1940, wages increased, and the standard of living rose higher than anywhere else in the Middle East.)  Still, Israel’s contributions made some Arab leaders in the Palestinian area become increasingly hostile to the Jewish community. Many affiliated with the rising Nazi movement, incited and instigated mob attacks against the Jews in 1920, ’21, ’29, and 1936-1939.

Anti-Semitism among these German-Muslim students has become critical and life-threatening, and continues as they fail to integrate into their host society.  German Chancellor Angela Merkel said, “It is absolutely necessary to counteract religious and political indoctrination among Muslim youth.”  These words should have been spoken and acted upon yesterday, because the Muslim children of today have been groomed to become the jihadists of tomorrow.