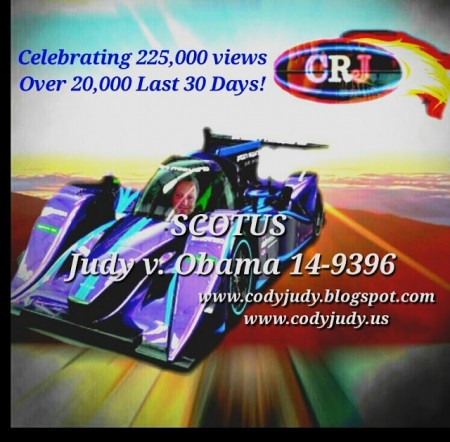 (Jun. 5, 2015) — The month of June is forecast to be one that is quite challenging and perhaps even rocky for the psyche of Americans in many different arenas. Chief nauseate may be the details of putting lipstick on a pig and deciding what label best suits reinventing the pork chop, which is still a pork chop. Of course on the eve of the Belmont Stakes Race with American Pharaoh scientifically prophesied to lose the last race of the Triple Crown, the premonitions of doom looms grandiose; “if it hasn’t happened in modern history, it isn’t going to happen!” Yet quietly our heart ‘hopes’ that indeed greater things can and will happen that defy the-egos-of-intelligence. Take, for instance, the U.S. Supreme Court deciding to hear Judy v. Obama 14-9396 which lays before the Court on a silver platter as to the testing qualifications of the Office of the President that used to be considered elementary American intelligence, but also acts as a double-edged sword upon the Achilles heel of any Presidential Candidate who is not a ‘natural born Citizen’ – Born in the U.S. to Citizen Parents.

The whole nation hopes against these ‘prophets-of-doom’ for a greater cause and a greater hope to be unleashed that defies their small-mindedness packaged as Darth Vader’s controllers of the universe. Snuff out ‘hope’ and what do you have? Control, it’s not meant to be ‘fair’, it’s not meant to be ‘equal’, and it most certainly is not meant to include ‘Justice for all’. That notion is absolutely ridiculous to these malicious arbitrators who also herald the American Dream deceased; just as soon as their pockets are padded well enough, of course. The protection of current elected politicians is to put up with, endure, and to stamp out ‘hope’ of a Triple Crown winner that comes out of America’s Justice system. Alas, where would we expect to find ‘justice’,’truth’, ‘integrity’, and ‘wisdom’ and the courage it takes to actually implement them?

What else could it be called when your long-form birth certificate has been proven a fabrication by law enforcement; you Social Security number can’t even be put in the system to sign up for Obamacare because it comes up ‘used’; your Selective Service registration just doesn’t match up with the stamps used at the time; and you’ve made matters altogether un-transparent by your own executive order and unwillingness to open up other forms of identification such as college transcripts, marriage licenses, divorce records, and professional licensing bureaus, as Obama has done? Obama has made transparency when it comes to his name a ‘dirty word’ by his own actions.

The excuses:
1.”It’s too late,” – which translates- ‘If it isn’t instant, it’s not worth it to me, as long as my car, wallet, and identity haven’t been stolen’
2.”Citizen” and “Natural Born Citizen” mean the same thing – which translates- the Founders were just idiots anyway and put the two terms in the same sentence as a repetitive word so we would all be so confused.
3.”Credibility” of the Whistle Blower – which translates- Someone ‘perfect’ like Jesus Christ is the only one who could bring this action to Court, and since he isn’t an American natural born Citizen running for President, he has no ‘standing’ and is not within the ‘jurisdiction’ in our United States Courts.