“JUST A SAMPLE OF WHAT’S IN STORE” 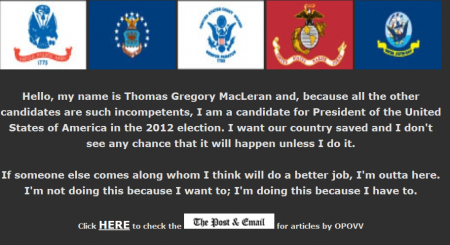 (May 22, 2015) — The straight skinny: according to the election rules, I’ve got to raise $5,000 from my political supporters in order to have my name on the ballot for president; that’s if I decide to run in the first place, which I haven’t. But, with your help, I might.

Here’s the deal: you send me $1.00 and I’ll send you a ticket for the opportunity to throw rotten vegetables (bring your own) at the former de facto president Obama. How’s that possible? Because after I take the Oath of office as president, I’ll arrest the fraud Obama and everyone associated with the fraud.

I’ll hook up with one of those carnivals that travel the morthern states in the summer and follow the spring training MLB home camps in the winter. And I’ll be responsible: I’ll make sure Obama is covered under Obamacare, 100%, nothing less and nothing more.

Think about it before you commit to deporting Muslims and illegal immigrants, abolishing the DHS, IRS and the Federal Reserve Bank of Theft.

But don’t send any money, yet. In the meantime, send a couple of dollars to the ASPCA and/or the USO.

And now, an excerpt from my campaign speech:

Fellow Patriots, since January 20, 2009, the day the usurper Obama took over the White House, the world has become a much more dangerous place by a large factor.

The United Nations was known previously for its money-laundering skills, while today it’s become the vanguard of Muslim Public Relations.

The Federal Reserve Bank was just another loan shark collecting a large vig, while today the Fed is owed a large percentage of the sweat equity in not only our labor and our children’s, but also the future of generations down the pike. I plan to abolish the Fed and return control of OUR money back to Congress, as clearly stated in the Constitution.

Consider the IRS a thing of the past and Lois Lerner in jail.

As far as Islamic States and other countries go, no more money from us. If you’re willing to act like human beings, we’ll help you drill for fresh water and do our best to provide washing machines instead of computers that you don’t have time to use because you’re too tired from doing laundry all day and carrying water.

It goes without saying that I’m kicking Muslims and illegal immigrants O-U-T, and if anyone has a problem with that, they’ll be empty-just-vacated-prison-cells to call home before they’re kicked O-U-T anyway.

All women will be required to attend gun safety courses and upon successfully completing will be awarded a gun to conceal/carry.

And if any of you are thinking voter fraud, think life in prison.

Iran? Getting the nuke? The same chances as the PLO ever getting a dose of reality: Israel ain’t going anywhere, so get used to the idea. No, I don’t carry a stopwatch around with me, but you can count your bottom dollar that there’s no way that Iran will be allowed to even pretend they’re grown-ups in a grown-up world.

And a note to General Jack Keane: I’m sorry, but if I ever become president, consider yourself drafted as the Chairman of the Joint Chiefs, and your orders will be “WIN THE WAR.”

And that’s just a sample of what’s in store.

Here’s a financial tip: buy gold because the USA is going back on the Gold Standard.

Remember, send a couple of bucks to the ASPCA and/or the USO.