The Police! Armed For Your Protection? 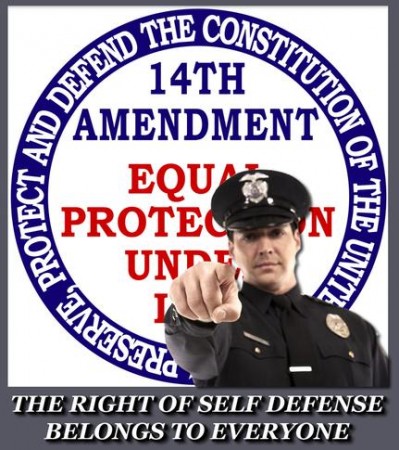 (May 6, 2015) — In these violent and extremely dangerous times every part of society now finds itself wondering and worrying about safety and security for itself and its families. No single group of people are under more threat than our police officers. They are underpaid, under-appreciated and in many quarters despised by fools and sacrificed by politicians.  Every decision they make could not only end their careers but end their freedom.  God bless each and every one of them.  We will return to the police in just a bit.

As many of you know The SAPPA Group founder Mr. Nicholas Purpura is in the very final stages of filing a legal Brief in the Federal District Court in Trenton.  This article has been researched and written with support of that Brief in mind, but it also covers a topic which needs to be addressed.  The topic is the 14th Amendment and the equal protection it requires for all citizens.

Please understand that the intent here is not to disparage the police or in any way will it suggest the police should not be armed. They should be and they should be armed well.  This is about whether a police officer’s life and rights hold a greater value in law than the value of the average law-abiding citizen.  In other words, are the police, as in the famous novel Animal Farm, more equal than others?

The SAPPA Group has spent the better part of the past 24 months working on the Federal Brief referenced above.  During that time we spoke with many legislators, patriot groups, hunting clubs and gun clubs.  We made a special effort to clear up one very big misconception about the Bill of Rights as it relates to not just the 2nd Amendment but all the unalienable rights covered therein.

Many people and all liberals believe the 2nd Amendment gives us the right to defend ourselves.  In other words, to bear arms.  It does not.  The 2nd Amendment acknowledges that that right comes from God and therefore it’s a natural right.  The amendment does not give anyone his rights; it prohibits government and officials from infringing on them.  This may seem a small difference. It is not. Simply put, if one man can give you something, another man can take it away.  This, of course, is what our battle centers on.

Another widely-believed idea is that the police are armed for your protection.  They are not.  They are armed for their own.  It’s true the police are much more likely to need a weapon to defend themselves than the average law-abiding citizen and they do put their lives at risk every time they investigate a crime or place a suspect under arrest.  The simple fact that society needs police to arrest criminals proves that the average citizen is also in need of the ability to protect himself, surely not as often as the police, but if it’s once and if it’s you, it’s often enough.

Here are some quite interesting facts. Of the approximately 1.3 million armed policemen in this country, consistently over the years, 99% of the times they draw and use their weapons is not to stop a crime or to prevent a murder but to ensure their own safety in a perilous confrontation with a perpetrator.

Many hours of research has turned up such a small number of incidents where a policeman stopped a violent crime in progress, that number is so small, it is just about statistically zero.  Of the few incident reports we have found where a crime was prevented as a result of an armed law enforcement officer, that officer was in plain clothes or off duty and just happened to be at the right place at the right time.

To “Serve and Protect” is not an erroneous slogan, but it is slightly misleading. They do Serve us by finding and helping to incarcerate criminals and they may also, to some extent, Protect us by being a deterrent and providing a presence.  But keep in mind, they are armed for one reason. Their Self-Defense.  The very same self-defense every law-abiding citizen has a right to.

More interesting information now as to how and under what circumstances a firearm is drawn and/or used by citizens legally permitted to carry.  Let’s be clear here, we are not talking about criminals, gang members or drug cartel members.  This is about law-abiding citizens who have not had their rights infringed.  Actual numbers are very hard to track down, and to be fair and honest, we were not able to get information from every state.  But we are confident that we have garnered enough information from as many sources as we could to come up with a certain and sure statistic. Curiously, the percentages in this finding did not vary by more than a few points from city to city nor from suburban area to city areas.   Are you ready for this?  Close to 98% of the incidents when a law-abiding citizen used his weapon, either as a threat or the actual firing of it, it was done to stop a deadly assault, rape or robbery.

So while the average police officer surely does serve his community, the legally and un-infringed citizen is doing much of the actual protecting.

Part of the lawsuit The SAPPA Group is presenting relates to the inconsistency of New Jersey’s legislators and governors, past and present, as it relates to the people’s right to self-defense.  They have stated in several legal positions in justification of their unconstitutional laws that self-defense does not require the use of a firearm.  Not one carry permit has been issued in New Jersey for reasons of self-defense.  They arrogantly state that other means are available.  When criminals have guns, what other means would they suggest?   Our report clearly shows that the police rarely prevent anyone from being murdered or assaulted.  They do that in a statistically zero percent. Would any one of those NJ legislators  like to survive those odds?  No, no they wouldn’t.  Many of them carry weapons.

This brings us back to the 14th Amendment:
Section 1.  All persons born or naturalized in the United States, and subject to the jurisdiction thereof, are citizens of the United States and of the State wherein they reside. No State shall make or enforce any law which shall abridge the privileges or immunities of citizens of the United States; nor shall any State deprive any person of life, liberty, or property, without due process of law; nor deny to any person within its jurisdiction the equal protection of the laws.

The information we offered above cannot be disputed.  It would be very difficult to twist the facts relating to what purpose is served by arming the police.  It is for their self-defense.  And while they are civil servants whose job puts them in peril, the citizens of this country are also in peril.  And a growing peril it is.  All law-abiding citizens have the same God-given right and constitutionally legal authority to the same protection as the elites and the police.  Except here in New Jersey?

Maybe at this moment.  But some timbers are about to be shivered.

The Police! Armed For Your Protection? added on Wednesday, May 6, 2015