PLANS TO DEVELOP ARTISTIC TALENT AS HE RE-ENTERS SOCIETY

(Apr. 29, 2015) — Since 2010, The Post & Email has reported on the case of Darren Wesley Huff, who learned of court corruption in Monroe County, TN after the arrest and incarceration of CDR Walter Francis Fitzpatrick, III (Ret.) on April 1 of that year.

On the date of a scheduled arraignment hearing for Fitzpatrick, April 20, 2010, Huff traveled from his home in Georgia to Madisonville, the government seat of Monroe County. He was in the possession of legally-owned firearms which he locked in a toolbox attached to the back of his truck before entering the town following a traffic stop carried out by Tennessee Highway Patrolmen.

Like many other would-be attendees, Huff was not allowed to enter the courtroom. He therefore patronized a local restaurant where several county law enforcement officials were dining. There were no incidents at the diner, and Fitzpatrick joined the group following the brief arraignment hearing across the street.

An FBI affidavit issued ten days later alleged that Fitzpatrick and Huff had planned an armed takeover of the courthouse, something that never happened. As a result, Huff was arrested and incarcerated, then freed temporarily with an ankle monitor.

On December 1, 2010, Huff pleaded “no contest” to charges stemming from his operation of a video camera on April 1, when Fitzpatrick had attempted a citizen’s arrest on the Monroe County grand jury foreman, Gary Pettway, for over-serving his term. Huff was not jailed or fined.  However, federal firearms charges were brought against him in what many perceive to be a politically-motivated assault on First and Second amendment rights.

The U.S. Department of Justice refused to release any documentation to The Post & Email through a FOIA request on the massive number of deployed law enforcement officers into Madisonville on April 20, 2010, the day of Fitzpatrick’s arraignment. Initially, the FBI said it possessed no responsive records, but a higher level of review yielded a letter affirming that documents existed but could not be released because of “privacy” concerns.

Fitzpatrick has termed the event “the Madisonville Hoax.”

The Obama regime has been found to be highly secretive, particularly involving FOIA requests.

Both Huff and Fitzpatrick are U.S. Navy veterans. The Obama regime is on record in its view that military veterans are considered “potential domestic terrorists.”  Soldiers returning from battlefields in Iraq and Afghanistan as well as older veterans have often been deemed mentally unstable and thereby denied firearms ownership.

Documentation exists indicating that Obama supporters placed calls prior to April 20, 2010 to then-Madisonville Mayor Alan Watson alleging that Huff and Fitzpatrick had developed a violent plot, along with “militia” members, to “take over the courthouse.”

At his federal trial, Huff maintained his innocence and claimed that the government he had served had turned against him. The jury acquitted him of one charge and was initially hung on the second until U.S. District Court Judge Thomas A. Varlan told them to “try again.”  The jury then returned a guilty verdict on the second charge, and Huff was sentenced by Varlan to four years in federal prison and two years of probation.

Varlan was sent exculpatory evidence on Huff but chose to ignore it at the sentencing on May 15, 2012. Connections between Varlan and local corrupt Tennessee government officials have been reported on two occasions to the U.S. House and Senate Judiciary Committees.

On January 30, 2014, the Sixth Circuit Court of Appeals located in Cincinnati, OH heard appellate arguments in Huff’s case, with Atty. Gerald Gulley representing Huff.  The government was represented by Assistant U.S. Atty. Luke A. McLaurin, who fabricated evidence by stating that Huff and Fitzpatrick had exchanged text messages as part of their alleged plan prior to April 20, 2010.

No decision has yet been rendered by the Sixth Circuit. 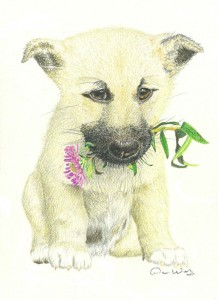 Huff was imprisoned at the federal institution in Texarkana, TX and released on April 15, 2015. While incarcerated, he rediscovered an artistic talent he had exhibited in grade school, producing a number of Christmas scenes late last year using colored pencils.   Family members then reproduced the prints to create unique Christmas cards to assist Huff in raising funds for his anticipated release.

Since then, Huff has created several new designs which are now displayed in an online store. He hopes to raise money to assist in his re-entry into society and the completion of his parole.

On Wednesday morning, Huff told The Post & Email, “The drawings that I now do, like the butterflies and blue flower, are all done on 11 x 14 and take anywhere from 50-60 hours to complete. The cards from Christmas were done ON a card and took between 10-13 hours to complete. I decided to go to using all 11 x 14s simply to be able to add even more detail, so all cards/works in the future will be done in much greater detail. I also do pencil portraits that have a good deal of photo realism and are much faster – around 15 hours.”

Cards can be seen here and are sold for $5.95 each, which includes the cost of mailing.