“THE GREAT LEGACY OF MONARCHY” 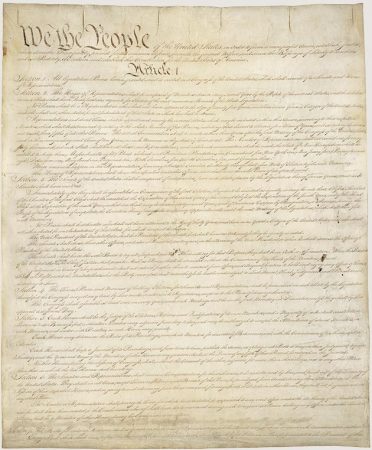 (Apr. 21, 2015) — In an interview published last week, activist Ted Hayes told The Post & Email that he believes the solution to the problem of illegal aliens in the United States can be solved by Americans embracing the principles of freedom and ultimately returning aliens to their home countries to build the same kind of societies there.

“That is our mission,” Hayes said of his efforts to raise awareness of what he sees as a threat to black communities, in particular, by recent infusions of illegal aliens as well as the tens of millions already here.

Hayes believes that the Obama regime has used emotion, guilt, race-baiters, and the concept of “civil rights” to force the acceptance of millions of illegal aliens in their midst who Hayes said displace many blacks, who in Los Angeles, where he lives, comprise the largest homeless population.

Often quoting from Lincoln and other presidents, Hayes sees the American Civil War as still ongoing and exacerbated by politicians’ quest for power through a new potential voting bloc.

The White House has developed a plan with the purpose of “strengthening communities by welcoming all residents,” regardless of their legal status or citizenship, through the Task Force on New Americans declared in a presidential memorandum on November 21, 2014.

On November 20, Obama announced major policy changes in regard to the illegal-alien population which Homeland Security Secretary Jeh Johnson later claimed were an attempt to follow the 1992 immigration law passed by Congress and simply clarify priorities about who should be removed from the country.

Obama’s “executive actions” were challenged by a group of 26 states, and a hearing in front of a three-judge panel on Friday as to whether or not a judge’s injunction will be lifted is pending at the Fifth Circuit Court of Appeals.

In a report dated April 14, 2015, former La Raza member and current Director of the White House Domestic Policy Council and United States Citizenship and Immigration Services (USCIS) Director Leon Rodriguez stated that there are “more than 40 million immigrants and refugees living in the United States.”

According to an article published on April 20 by Daniel Horowitz, as of 2010, California, Nevada, Texas, Florida, New York and New Jersey had populations containing more than 15% foreign-born individuals.  A report from the U.S. Census Bureau released last month estimates that “by 2060, nearly one in five of the nation’s total population is projected to be foreign born.”

Prior to the issuing of Munoz and Rodriguez’s report, Hayes and a colleague, Susan Payne, participated in three conference calls with White House officials in which the proposed arrival of a cited 13 and 15 million aliens to American cities was discussed. During the calls, illegal aliens were referred to as “seedlings to be planted in fertile soil to grow.”

Those directing the calls referred to illegals potentially brought to the country as “new Americans.”

Our proud tradition of continually welcoming immigrants and refugees from around the world is part of what makes America exceptional. It’s what makes us dynamic and entrepreneurial. We’re a group of people bound together by the power of a simple idea – that everyone willing to work hard and play by the rules is welcome. On November 21, 2014, the President established the White House Task Force on New Americans — a government-wide effort tasked with better integrating immigrants and refugees into American communities in three key areas: civically, economically, and linguistically.

On March 31, USCIS held an “off-the-record” conference call among unnamed parties with the purpose of detailing a joint plan with the U.S. State Department to bring children of certain legal U.S. residents into the country at taxpayer expense through resettlement agencies.

On February 17, the White House held a conference call “not for press purposes” with at least one sitting governor’s office to discuss the injunction placed on Obama’s executive actions by U.S. District Court Judge Andrew Hanen.

A link from the USCIS website explaining the program leads to a non-governmental website labeled “Refugee Processing Center” which contains a flow chart explaining how minors from the countries of El Salvador, Guatemala and Honduras can apply for “parole” if their status as a “refugee” is denied.

Congress did not vote on nor pass the “CAM” program described by the Refugee Processing Center.  A link from the non-governmental website leads to the U.S. State Department’s “Fact Sheet” on the “In-Country Refugee/Parole Program for Minors in El Salvador, Guatemala, and Honduras With Parents Lawfully Present in the United States” announced prior to Obama’s November 20, 2014 policy change declaration.

In an April 13 article at ImmigrationReform.com, Ira Mehlman reported that taxpayers are leaving the states of Illinois, New Jersey, California and New York in significant numbers because of the presence of high numbers of immigrants who eventually become voters and “rely heavily on state redistributionist policies.”

Mehlman added, “The three states receiving the greatest numbers of domestic migrants – Texas, Florida and North Carolina – are also experiencing large influxes of foreign migrants, but have yet to reach the political tipping point where the government- dependent have the voting clout to redistribute wealth through taxation. But it’s coming. Florida and North Carolina have turned purple in national elections and the wealth-redistributing, open borders folks on the left gleefully predict that it is only a matter of time until mass immigration changes the political landscape of Texas.”

In August 2012, the Obama regime implemented the Deferred Action for Childhood Arrivals (DACA) program, which allowed several hundred thousand young illegal aliens brought to the country as children by relatives to apply for an obtain work authorizations and deferment of any deportation actions.  In a recent letter to Sen. Charles Grassley (R-IA), Rodriguez admitted that an illegal alien approved for DACA and now charged with the murders of four people should not have qualified for the program.

On Tuesday, The Washington Times reported that “USCIS admitted in its letter to Mr. Grassley that another 20 immigrants with potential gang ties have also been approved, and officers are now going back and trying to figure out whether rules were broken in those cases as well. Mr. Rodriguez said his officers will also face retraining so they know which applications to deny.”

When The Post & Email asked Hayes if he believes that Americans can unite over the issue of illegal immigration which costs taxpayers billions each year, he responded, “This will either be America’s final hour, or this could be our finest hour.  I choose to believe this is our finest hour.   As Kennedy said, we don’t go to the moon because it’s easy; we do it because it’s hard.”

Quoting Lincoln’s Gettsyburg Address, Hayes read, “‘…that these dead shall not have died in vain; that this nation, under God, shall have a new birth of freedom, and a government of and by the people shall not perish from the earth.’  That new birth of freedom is still available to us.  The fact that it is as dark as it is gives the light that much more opportunity to be identified as light, and when the people who are trapped in the darkness see that light, they will free themselves from that and come forward – on the political left, right; black, white, red, yellow, Jew, Muslim, Christian, Buddhist, atheist.  That is my belief, and that is what I expound.  There is hope; there is a chance.”

History teaches us that as human beings, we tend to not be progressive, forward-thinking, offensive; we tend to be defensive, reactionary.  We don’t get moving until we run out of options.  As one sheriff who was talking to me about this strategy said to me the other day, “You know, Ted, you’re onto something because we have tried everything, and we are losing.  We may as well give what you say a shot, because it’s the last shot we have left.  When I say “shot,” I mean it figuratively, because they listen to my phone calls.  I appreciate their listening to my phone calls, frankly; I want them to listen, because I know we have good guys all throughout our government. But the good guys will not risk their careers and their lives if they don’t see the most powerful entities in the United States, which is We the People, sensibly and intelligently organizing ourselves. When they see us doing that, they will begin to do things from within, but they’re not going to step out there and do something – and I don’t blame them – when they know We the People are too busy partying, watching football, being entertained, crying the blues or complaining about what’s wrong. 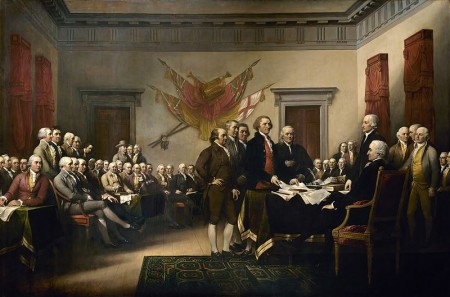 I don’t know if the Founding Fathers knew what they were doing on this part or if God was working through them – we know God was working through them – but they left us in a really interesting bind.   When they said that they were charging us with forming a more perfect union, to establish justice, etc., they were dealing with human beings who would rather follow than lead.  History proves that; it’s the great legacy of monarchy. That’s why you have dictators and big, powerful men:  because the people want someone else to make decisions for them.

When the Founding Fathers created a new order of the ages, they actually formed an aberration in government throughout all of world history.  They were gambling that human beings can govern themselves.  King George told Benjamin Franklin, after the war over and they were having a beer back in the king’s parlor at the court, “Well-done; we didn’t think that you little guys could whip an empire, but hey, you did it!  But good luck.  Because what you’re doing is not going to last.  The laws of nature are against what you were trying to do here.”

So that’s our problem.  I think we can do this, if we come to understand what the role of We the People actually is.  We have enough ability to organize ourselves; we have the internet still; we have transportation; we can actually rein in our politicians and make them do what they’re supposed to do. We still can do that, and the day that we do that or show signs of doing that, believe you me, they will submit.

One Response to "“Welcoming Communities” or “We the People?”"