(Apr. 18, 2015) — On March 30, Tennessee state prisoner Michael Wayne Parsons was informed of two additional charges by the Tipton County Circuit Court with two counts of possessing firearms as a convicted felon on February 11, 2014 then on parole.

Judge Joe Walker presided over the hearing, which was held in the jail by means of a video hookup.

There was no probable cause hearing prior to the arraignment, and the indictments were made public in a March 18 article at The Covington Leader, which was the means by which Parsons’ wife learned of the new charges.

In November 2009, Parsons was convicted of three felonies resulting from an unprovoked attack by Barry Laxton on the Parsonses which killed Brandi, one of their pet wolf-hybrids which Laxton claimed he thought was a wild wolf.

Laxton, a person unknown to the Parsonses, attacked them without provocation on September 24, 2007, firing (according to Laxton’s own testimony) 29 times at the wolves in the uninhabited wooded area across the street, despite admitting under cross-examination that he knew the Parsonses lived there.   During the incident, Mr. Parsons attempted to conduct a citizen’s arrest on Laxton, confiscating Laxton’s rifle used in the attack that Laxton tried to hide in the back of a truck. 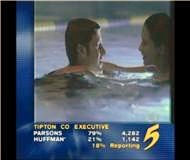 Parsons had run for the position of county executive in 2006 on a platform of fighting public corruption, protecting private property rights, creating jobs and adhering to constitutional principles.  When evening election returns reported on television showed that Parsons was the projected winner over his opponent, Jeff Huffman, he retired for the night believing that he would be declared the winner.

Instead, the election commission reported that Huffman had won an overwhelming number of votes.  Parsons then unsuccessfully attempted to obtain ballot records and consequently filed a lawsuit challenging the election results.  Both the trial court and appellate court ultimately ruled against Parsons.

The Post & Email has acquired the final 2006 election results from the Tipton County Election Commission showing Huffman the winner.  Huffman was seated as county executive in August 2006, a post he continues to hold today.  As sent to us, the results were:

As a result of the attempted citizen’s arrest, Parsons was himself ordered arrested by Judge William Peeler.  He was indicted by a Tipton County grand jury, tried and convicted of two counts of aggravated assault and one count of burglary of a vehicle, according to newly-issued court documents.

Prior to his conviction, Parsons launched a radio show entitled “The Voice of Truth with Mike Parsons” with the purpose of “exposing the corruption in government.”  After his release from prison in April 2012, Parsons returned to working on his farm, which included effecting repairs to damages incurred by storms while he was incarcerated and out-of-state travel approved by his probation officer.

Citing Tennessee law, Parsons has argued that he was not in possession of his wife’s firearms which she had brought in to the house while he was traveling out of state to purchase supplies for the farm.  On February 11, 2014, Parsons received an unexpected call from his probation officer requesting that he meet him at the gate to his property.  Upon his compliance, Parsons was met by a group of county officials, at least one of whom remained unidentified, demanding to inspect his farm animals based on an alleged complaint filed by a member of PETA curiously located in the state of Maine.

Parsons was eventually cleared of any mistreatment of his animals.  During the inspection, which Parsons termed a “raid,” he was asked, “Do you plan on running for county executive again?” to which he answered in the negative, citing an abundance of work to be done on the farm.

As is the case with many Tennessee grand juries, the foreman of the Tipton County grand jury has been serving continuously for more than 20 years after he was handpicked by a judge.  When The Post & Email spoke with Tipton County Circuit Court Clerk Mike Forbess recently, he informed us that he was not familiar with the method by which foreman William Brooks had been vetted and confirmed that Brooks had been serving “longer than I’ve been here,” which Forbess identified as 20 years.

Grand juries are mentioned only in the Fifth Amendment as a bulwark between a government prosecutor and the citizenry.  Federal grand juries do not have handpicked foremen to the best of the public’s knowledge.

A trial date on the new charges has been set for August 17, 2015 with a preliminary hearing on June 26.  Parsons expects to be released from prison next month and requested time to engage an attorney, according to documents The Post & Email has acquired. On Friday, The Post & Email contacted District Attorney General Michael Dunavant but was told he was out of the office that day.  We left our contact information and were told we could expect a return call this coming week.

The Tennessee District Attorneys’ General Conference states that a grand jury is “a group of thirteen citizens chosen from the jury panel. One of these thirteen is the fore person and will preside over the grand jury.”

Over the past six years, The Post & Email has documented numerous cases of government corruption throughout Tennessee, all of which involve the denial of defendants’ constitutional rights to due process on the part of longstanding grand jury foremen, criminal court judges, court clerks, grand jurors, trial jurors, prosecutors and sheriffs’ departments which further a prisoners-for-profit operation.

“Their goal is to convict you,” Parsons told us in an interview in February.

The Post & Email has attempted on two occasions to speak with Parsons’ parole officer, Danny Johnson, but has not received a return phone call.

Frequent multiple convictions of the same person in Tennessee often result in lives spent predominantly behind prison walls without the benefit of due process provided for in the Tennessee constitution, Bill of Rights, and U.S. Constitution.

According to his wife, Parsons is now at TCIX in Only, TN, and his release will likely occur at the end of May.  We were also informed that “at TCIX, they are keeping him from the library to meet his 45 day deadline (already past), would not notarize some documents to go the court, nor would the mailroom allow him to come down and get his mail weighed for proper postage to go to the court. It’s as though someone from outside the prison is pulling strings again, just like at Bledsoe,” referring to the Bledsoe County Correctional Center (BCCX).

Behind Prison Walls in Tennessee added on Saturday, April 18, 2015

One Response to "Behind Prison Walls in Tennessee"