WILL INJUNCTION BE LIFTED? 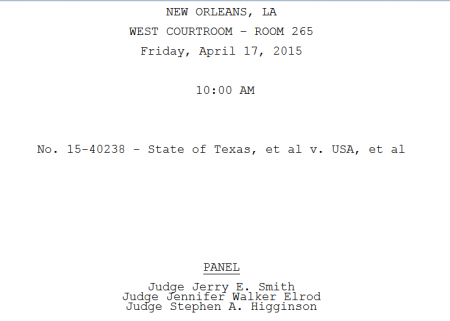 (Apr. 17, 2015) — 10:55 a.m. EDT – Within minutes, a hearing is to begin at the Fifth Circuit Court of Appeals in New Orleans to decide whether or not a temporary injunction imposed by U.S. District Court Judge Andrew Hanen should be lifted, allowing Obama’s executive actions on illegal aliens to go forward.

A three-judge panel will hear oral argument from the U.S. Department of Justice and attorneys representing “State of Texas,” which includes Texas and 25 other states filing suit against the United States against Obama’s executive actions on illegal aliens announced on November 20, 2014.

On February 16, Judge Andrew Hanen of the US District Court for the Southern District of Texas placed a temporary injunction on the actions, which were scheduled for implementation on Wednesday, February 18.

The states claimed that they would suffer irreversible harm if the actions were to become policy. Prior to Hanen’s ruling, a group of 14 states plus the District of Columbia joined an Amicus Curiae brief asking Hanen not to block the executive actions.

In a subsequent hearing on March 19, Hanan expressed dismay at what he termed the DOJ’s misleading the court, calling himself “an idiot” for having believed the DOJ when its attorneys asserted that no item of the program had been initiated. Instead, approximately 108,000 applicants to the Deferred Action for Childhood Arrivals (DACA) had been granted three-year reprieves from deportation as outlined in the new executive actions instead of the two-year reprieves set forth in the original DACA policy.

The DOJ asked for an emergency stay of Hanen’s injunction, which will be under discussion today.  The hearing begins at 10:00 a.m. CDT/11:00 a.m. EDT in the West Courtroom, Room 265.  Each party will have one hour to argue his case.

Hearing to Begin On Friday On Obama Immigration Actions added on Friday, April 17, 2015