ADMITS HE WAS MENTORED BY COMMUNIST FRANK MARSHALL DAVIS 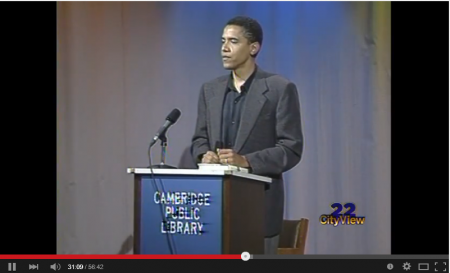 (Apr. 13, 2015) — A full-length video from 1995 of Barack Hussein Obama giving a presentation about his book from which clips were presented earlier on Monday by Cliff Kincaid has been posted to YouTube by 22-CityView with 181 views as of this writing.

As Kincaid reported, Obama spoke about his first book, Dreams From My Father, as part of a lecture series presented by the Cambridge, MA Public Library in September 1995.  The address begins with Obama telling the audience about his parents and extended family and his anger at being a black man in a world where he believed white people were oppressors.

Obama reads a lengthy passage from the book which provides the listener with a view into his racial animus and feelings of “betrayal,” even though, according to his life story, he wanted for nothing while being raised by his white grandparents and attended the prestigious Punahou School, a private campus which average Hawaiians cannot afford.

At the beginning of the address, Obama mentioned that Colin Powell had recently spoken at the library.  Powell published a book in 1995.  During the 2008 election, Powell called Obama “a transformational figure.”

At approximately 1:50, Obama states that his father was “African” and his mother was a white American.  However, before describing her, he paused and appeared ready to articulate a word beginning with the letter “m.”

In a 2008 interview with ABC’s George Stephanopoulos, Obama mentioned “my Muslim faith” but was quickly corrected by Stephanopoulos, who said, “you mean your Christian faith” in keeping with Obama’s public life story which says that he is a Christian.

Obama has insulted and belittled Christians often during his de facto presidency, including last week at an Easter prayer breakfast, while appearing to favor Islam, including addressing Islamic groups in Arabic to commemorate certain occasions important to them.

During the video, Obama fully identifies Frank Marshall Davis, a communist writer who is also said to have been involved in child pornography, who reportedly acted as Obama’s mentor in Hawaii.  He reads the passage largely in a fake southern accent to delineate Marshall’s comments.

On March 1, 2012, a criminal investigative team announced at a press conference that Obama’s long-form birth certificate and Selective Service registration form are “computer-generated forgeries.”  The two “documents” are the only information Obama has released about his past.  In subsequent interviews, lead investigator Mike Zullo has suggested that Obama’s biological mother may not be the woman Obama has identified.

Kincaid pointed out that The Washington Post has denied that Davis had any influence on Obama’s life.

At 28:20, Obama says that he received “an advance” from his publisher which “allowed me to go back to Kenya.”

Zullo has reported that there is no evidence of Obama’s presence in Hawaii before the age of five.

Many suspect that Obama was not born in Hawaii, as he claims.  His wife has identified Kenya as “his home country.”

While answering a question following the reading, Obama again assumed a southern accent while talking about “my homey look” and multiculturalism.

He spoke about how in 1992, “having come out of the Reagan and Bush era…there was some sense that now was a time where we could look inward and do something domestically” in regard to elevating the plight of minorities in cities.  He indicated an interest in “politics” and expressed that people need to become “engaged.”

Obama’s 1995 way of expressing his sense of racial “isolation” is arguably very similar to the manner in which he has run the federal government, particularly the U.S. Justice Department with its focus on identifying racial bias toward blacks.

Obama claimed that his parents married during the Civil Rights era and were motivated by “breaking out of isolation.”  He spoke of “Freedom Riders” who went to the South to facilitate voter rights for blacks.

He said that his maternal grandfather “had an unsavory past” and described him as “poor white trash.”

Obama spoke about his experience as a community organizer, stating, “It takes work.”  He said he found solace to his “isolation” in becoming part of a community.

At 36:45, Obama describes his mother as “the most wonderful woman I know.”  According to his biography, Obama’s mother died on November 7, 1995.

Obama said that being black “in this country” was “a brutal experience” but that blacks are more “forgiving” than other people.  He invoked the image of Southern “slavery” before the Civil War and said that he believed that “basically, Americans are decent people” in describing his claimed optimism.

“Americans don’t like to sacrifice,” he said at 43:50.  Obama often speaks of “shared sacrifice” from the Oval Office.

He spoke of Chicago as reminding him of his “Kansas roots, even though I never lived in Kansas.”  In 2008, The Washington Post reported that Obama was “raised in the Kansas heartland.”  When The Post & Email queried The Post on its report, it failed to provide a response.

At 48:58, in response to a questioner, Obama discussed his “roots” in Kenya.  “Going back, I think, for me was to embrace at least a partial truth about Africa…” he said.

He said that Michelle grew up “in the south side of Chicago” and said, “What she realized is that she’s an American,” apparently as a result a visit to Africa.  Obama then described visiting his Kenyan grandmother and “a game when we were kids…,” using some African terms.

“What you realize when you go back is that African-Americans already partake of a hybrid culture,” he said.

At 52:54, Obama said that “Obama and Bush” had appointed judges who were not conducive to “civil rights laws.”  He claimed that it was “incredibly hard to bring a discrimination suit these days in the courts.  Incredibly hard.”  He denounced “corporations” who could spend large amounts defending themselves.