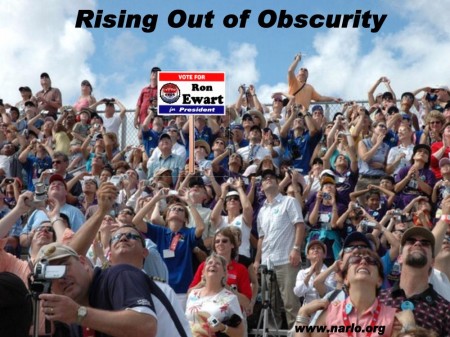 (Apr. 12, 2015) — Our last two articles hinted at the potential run for president of the United States.  We want to thank all those who encouraged us to run and for the positive comments to our recent articles and to our Presidential Platform.  With the number of responses in so far, it is running 20 to 1 in favor of us continuing to explore the possibilities.  In spite of this encouragement, we nevertheless must face some unavoidable realities.

What gets a president elected in the United States today?  The answers only boil down to a few vital elements.  The first and most important element is money.  Money buys massive national exposure.   Without the money, a candidate is done before he starts.

Following money comes name recognition and a positive political, military, or business history.  Following name recognition comes a candidate that espouses and effectively communicates cogent positions on the issues that resonate with most voting Americans.  Good looks and likeability help a great deal and so does being able to articulate where he or she stands on those issues, in dynamic and even hostile environments.   They must be quick on their feet and they must not flip-flop or make inane or stupid comments, as have so many candidates in the past.  Finally, they must exude confidence and a positive, personal aura and appear to be in control of their emotions while under fire.  Most voters are attracted to strong, confident leaders.  Sadly, even an articulate, snake oil con man, promising to fundamentally transform America, can be elected president if he has most of the attributes we have listed.

But let’s get to the money first.  From one source we learn:

“Campaigning for US president can be a very expensive proposition. Running a campaign to win a presidential primary can range in cost from $50 million US Dollars (USD) to over $100 million USD. By itself, this cost is already enormous, but there’s even more that must be spent to run for president. Once the primaries are over and the nominees begin their campaigns to win the general election, an additional $75 million USD is typically spent.”

Then there is name recognition.  Most presidential candidates in either party come from past or currently-held political positions in the federal or state government.  Being a governor of a state is a significant step up to the office of president, and a large number of previous presidents were state governors.  In addition to governors, we have had generals, senators, actors and captains of industry who have run as a candidate or have been elected president.  Successful candidates have either significant experience in government, military leadership at the top level, or extensive leadership experience in big business.

One of the major elements in getting elected is the position taken by the candidate regarding the current issues of the day.  Unfortunately, the American people are so divided that the issues important to one constituency group have no relevance to, or are opposed by another constituency group.  Adding to this dilemma is that hot-button issues can change from one month to the next, or even from one day to the next.

One of the reasons why politicians flip-flop so often is to appeal to all constituency groups for their votes, hoping the voters and the press won’t notice.  This leads to fabrications, lies and appearing wishy-washy and weak, which then leads to the ultimate loss of trust and even mind-numbing embarrassment.  The press just loves flip-flops and inconsistencies, especially if they come from conservatives.  They are raw meat to the lion and delicious fodder for reporters and editorialists who traffic in sensational journalism.

Likeability is a big factor in getting elected, even if the candidate is inconsistent or flip-flops on the issues.  Clinton’s infamous interactions with women throughout his entire lifetime didn’t mean anything to the voters.  They liked him, even if he lied about those interactions.  The same goes with Hillary Clinton.  If voters like Hillary they will vote for her and it doesn’t matter that she broke the law with her official e-mail account, or hid, or deleted a bunch of e-mails on Benghazi or fund-raising from foreign donors while she was U.S. Secretary of State.  It didn’t matter to the voters that Obama came from a socialist/communist background, had questionable associations with highly-questionable individuals, or had little experience as a politician and virtually no experience in business.  They liked him, and he said all the things they wanted to hear:  you know, like endless free lunches and taxing the rich.

The electorate is fickle and it will forgive the sins of the candidate if they LIKE the candidate.  Given that 47% of the people eligible to vote don’t vote and given that a huge percentage of those who do vote want something from government, that percentage will vote for the candidate who promises to deliver what the people want ….. for free, especially if the candidate is likeable, thanks to the perversion of the U.S. Constitution by the Democrats.  Nevertheless, that doesn’t say much for an electorate that appears to be mostly shallow, hollow and just plain stupid.

Against this backdrop, how can an obscure author rise from the shadows to become President of the United States in light of these unavoidable realities?  The odds against it are astronomical.  It is readily apparent that this author lacks several of the elements necessary to run for president, much less be president.  He has virtually no chance of even being nominated, unless …..

Perhaps many of you have heard of the “wave” that occurs in a stadium at sporting events.  A group of people in one section of the stadium start to move left or right in unison.  The next section picks up the wave from the first section and it moves spontaneously, like falling dominoes, all around the stadium.

Ideas, concepts, rumors, or even horrific events can move like a wave through society, especially in the world of the Internet.  A picture of a kitten doing something cute can receive millions of hits on YouTube in a day and be further propagated by Facebook, Twitter, Instagram and e-mail.  Such an event is almost wholly driven by emotion.  A candidate coming out of the shadows and saying all the right things and showing confidence, leadership and integrity could trigger such a wave, however unlikely.  If our ideas, concepts and our platform resonated with a large enough core group of people on an emotional level, those ideas could suddenly reach millions of voters in a matter of days.  From that moment on, the issue of name recognition and possibly even campaign funds could move towards resolution. Interestingly, in the 24 hours after Ted Cruz announced his candidacy for president, with much media fanfare, it has been reported that his campaign took in over $1,000,000.  This demonstrates the power of TV exposure, name recognition and a message that resonates with a large group of people.

An Internet “Wave” is the only way our candidacy for president could be catapulted into the public eye, and the chances of that happening are less than the chances of being hit by lightning seven times, or winning the Powerball Lottery at 1 in 175,000,000.  (By the way, there was a man once who was actually hit by lightning seven times at different times in his life, as improbable as that might be.)

So before you encourage us to pursue this effort, or consider donating to the cause, we strongly suggest you take a hard look at the hurdles and the insurmountable obstacles that stand in our way which we have described in this article.  Nevertheless, if by some of quirk of fate the “wave” should begin and grow, we stand ready for the challenge.

Words are easy, ladies and gentlemen.  The “doing” comes much harder.   It would seem that there are way too many people in America who are willing to write the words but way too few are willing to do the “doing,” or even the impossible.  We were at least willing to try the impossible, and that is what our Founding Fathers and the colonials did.  Were they better than we?  Were they stronger and more determined?  Didn’t they have more to lose, you know, like their lives, their fortunes and their sacred honor?

Humor is the best defense against a frustrating or an impossible situation, and so we will end this article with a humorous description of where America is today.  Although somewhat colloquial, it is painfully accurate.

“A man was musing the other day when he thought that over 5,000 years ago, Moses said to the people of Israel, ‘Pick up your shovels, mount your asses and camels and I will lead you to the promised land.‘  Nearly 75 years ago (when welfare was introduced) Roosevelt said, ‘Lay down your shovels, sit on your a**es, light up a camel, this is the promised land.’  Today, Congress has stolen your shovel, taxed your a**es, raised the price of camels and mortgaged the promised land.  The man was so depressed by thinking about all this, along with health care plans, the economy, wars, lost jobs, savings, social security, retirement funds, etc., he called a suicide hotline.  He had to press 1 for English.  He was connected to a call center in Pakistan.  He told them he was suicidal.  The Pakistani got all excited and asked if the man could drive a truck.”

[We’d like to give credit to the author of this story, if we could find out who it was.]

All humor aside, if America continues on the path it now treads, brave Americans could be faced with the last alternative of “having to fight when there is no chance of victory, rather than live as slaves under a tyrannical dictatorship.”   (Winston Churchill)

Someone whose heart and mind are buried deep in the exceptionalism and greatness of America had better start looking seriously at doing the “doable” or even the impossible.  It might turn out not to be impossible ….. under the miracle of the Internet.

Hopefully, this puts to bed any idea of our running for president.  Our attempt was merely to provide a contrast and a comparison to those who are running on the Conservative ticket for 2016.

Your constructive comments are welcome HERE.

Next week we will take on the militarization of America by the federal government.

Can An Obscure Author Rise from the Shadows to Become President? added on Sunday, April 12, 2015

2 Responses to "Can An Obscure Author Rise from the Shadows to Become President?"