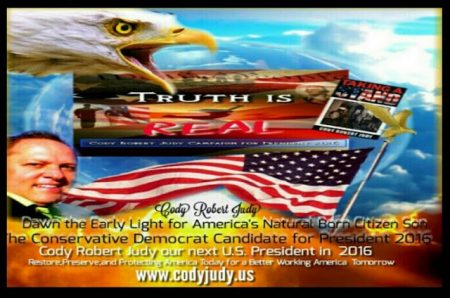 Cody’s experience with the Democratic Party runs long and deep from his childhood. From the ranching and farming experience in Idaho Falls, Idaho where Cody was born to two professional horse trainers, Robert O. Judy and Ali Judy, who together built Sand Dune Stables, owning and operating the ranch and farming land of about 300 acres. Cody’s folks were divorced when he was four and his father passed away in 2002 with his military service funeral sponsored from his service in the Army during the Vietnam War. Cody came from a vast rural and rugged experience, and moving with the horsemanship profession he has lived in many different States, collecting a wide range of life experiences from the East Coast of New Jersey to the middle plains of Ohio and Illinois to the West Coast in Idaho, Arizona, Utah and California. He recalls his step Dad, Glen Woodyatt, being the first Democrat he really knew, who his mother married when he was in the 4th grade. Enjoy this feature of Cody, past and progressive.

Cody’s political experience really began with a run in Utah’s 1st Congressional District in 2002 and U.S. Senate Seat in 2004 with the Democratic Party which he has written kindly about in his book Taking A Stand. He also entered the Democratic Party Presidential Race in 2012, giving Barack Obama at least a semblance of a primary as he opposed Barack Obama’s ineligibility as a candidate for President in the ‘natural born Citizen‘ requirement of the Constitution which he has taken to the Supreme Court of the United States in two separate cases.

A Word from the 2016 U.S. Presidential Candidate Cody Robert Judy

“There were many Democrats opposed to my running in the party, but the greatest respect was realized within the party of inclusion and civil rights, when those you might expect to have more reason than any to dislike me took a stand and voted to let me run in the Utah Democratic Party. That was the only election I ever won. The 90% required to bar me from the party platform was defeated by many of the individuals who understood and knew the very real struggle of functioning in society as a minority when the majority is dishing up a lot of unconstitutional discrimination. It turned out to be a really wonderful and great healing experience which I think our Nation is really in need of right now.”

“The Democratic Party in Utah gave me a chance to speak as a declared and Official Candidate and I hope that as the struggling Utah Democratic Party gave me that chance in Utah that the National Democratic Party will give me that same chance across the Nation in healthy Debates and a Primary: Not being afraid to hear the truth about the struggle of our Civil Rights and Constitution but having the Courage to embrace our weakness to make us stronger for America.”

“This is after all One Nation under God, indivisible, with liberty and justice for all I believe in. I see a great restoration that is needed in the struggle for the promise of justice for all in our courts, in our homes, in our work. The Deck has been stacked against the people with no standing and its been the back of the bus for them. As long as I do have standing and a voice I will proclaim and advocate for that precious backbone of America to be straightened. To rise up and take a stand, to shoulder the burdens fairly and assure the opportunity for all Americans!”

Cody has made a promise and a commitment to the Democratic Party of America.

The promise I make to the Democratic Party is one a President should be willing to make as it is included in the oath: To Preserve, Protect, and Defend the Constitution of the United States, and that if any unqualified Candidate like Sen. Ted Cruz or Sen. Marco Rubio should become the Republican Nominee that I will indeed take the same fight of eligibility to the Republicans that I have former Senator and President-Elect Barack Obama and Sen. John McCain. I plan on running as a Center Right Candidate to the former Secretary of State Candidate Hillary Clinton, where there is lots of room away from other Democratic Contenders who may appear on her left like former Maryland Gov. Martin O’Malley or Sen. Elizabeth Warren. Right now there is no defender of the Constitution’s highest office. There is no one willing to take that fight on and preserve, protect, and defend the honor of the Office of the President. I declare I will do it, and whether I’m elected or not for the actions of defense I take, is not important as the fact someone is doing it that has standing.”

“I’ve said it before: if there were only two Candidates to vote for – Hillary Clinton or an Ineligible Senator – I would choose Hillary Clinton if I was not in the race. She is a qualified candidate by the demands of our United States Constitution and I fully respect that as honoring our U.S. Constitution rather then preserving it for the megalomaniac-of-ego whose thanks to America is a slap at her face and a stomp on the document that is the umbrella of national security for our Country! It’s not just a piece of paper former President Bush W; its the definition of the Offices you all have enjoyed and its not hard at all to understand why Born in the U.S. to Citizen Parents is a time-honored qualification and has been for the highest office of the land in our history of Presidents.

“I firmly believe that a return and restoration of principle will be met with a return on prosperity. Ask any businessman how important honoring the word or contract is and they will tell you it is vital to success and you can take that to the bank. The word in our Republic is Constitution.”

“If language has become so scary to you that only the politically popular can utter sentences, I have no doubt the digression and even elimination of all of the defined offices within the United States Constitution will shortly appear on the horizon; including those of a lifetime tenure in the Supreme Court of the United States who think their chairs are secure. That’s how important this is!”

“If we don’t stand now we kneel as subjects soon and no one will have the simple rights of civility and Citizenship all because we polluted from the top down. When your head is sick, how well does your body function? The qualifications for the Office of the President is the keystone of our Republic and I hope there are a few Democrats out there who feel like I do, and will support my Candidacy, three point platform, and pass on the promise to our future.”

“That America as a Republic has given us a good life and we would like to hand that down to our children and grandchildren. Those who have died on the battle fields for America have done so with a pledge to our Constitution in securing those rights for future posterity. They may not have had children but all of our children benefited from their sacrifices. I haven’t been able to give my children very much either but I hope someday they understand how I fought for their opportunity to live their dreams and to see their dreams come true as I have seen mine. Truth will set us free. That truth that is real and you can count on as the laws of nature are true.”

“My experience in understanding the importance of this is a judgement call that sets myself and other politicians clearly apart. I hope it shows you that were their experience is real their decisions and choices have been made, still they have not made the clear choices for principle and our prosperity is suffering for it. Every choice has a consequence and your support for the Candidate you choose will also have a consequence that is real. I can not tell you how to choose, but I can be a clear choice. This is how I feel I can best serve my Country at this time,in this vehicle, and the biggest reason I now announce my official candidacy for President of the United States of America in the race for President in the coming election of 2016 in the Democratic party.”

“Thank you, God Bless you, and may God Bless America for the stand we are now willing to take.”

Cody Robert Judy brings a wealth of perspective and inspiration to the national microphone to a wide variety of audiences with experience inside America’s political, prison,musical, small business, and marathon arenas, highlighting the Constitutional challenges we face today preserving and championing the individual and civil rights so many have lost an understanding for. If your looking for inspiring and climbing motivation Cody’s experiences and speaking excites with a range from the bottom up.

Campaign Contributions are not considered a tax deduction.
We The Kids Pledge of Allegiance