“FROM THE PEN TO THE SWORD” 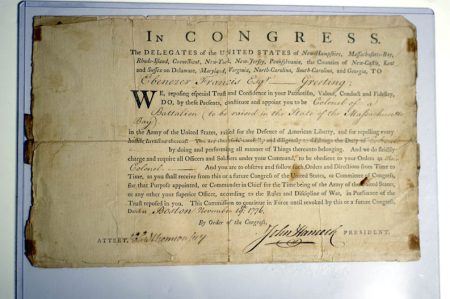 (Apr. 1, 2015) — After reviewing eyewitness accounts of the Battles of Lexington and Concord, the Massachusetts Provincial Congress summarized events in an address to the citizens of Great Britain:

“By the clearest depositions… it will appear, that, on the night preceding the 19th of April… a body of the king’s troops, under command of colonel Smith, were secretly landed at Cambridge, with an apparent design to take or destroy the military and other stores, provided for the defense of this colony… at Concord[.]   …the town of Lexington… was alarmed, and a company of the inhabitants mustered on the occasion[.]   …the regular troops, on their way to Concord, marched into… Lexington, and… on their approach, [the inhabitants] began to disperse[.]   …the regulars [however] rushed on with great violence, and… continued their fire until those of the said company, who were neither killed nor wounded, had made their escape[.]   …colonel Smith, with the detachment, then marched to Concord, where a number of provincials [Minute Men] were again fired on by the troops… before any of the provincials fired on them; and that these hostile measures of the troops produced an engagement that lasted through the day…

To give a particular account of the ravages of the troops, as they retreated from Concord to Charles Town, would be very difficult, if not impracticable; let it suffice to say, that a great number of the houses on the road were plundered, and rendered unfit for use; several were burnt; women in child-bed were driven by the soldiery naked into the streets; old men, peaceably in their houses, were shot dead, and such scenes exhibited, as would disgrace the annals of the most uncivilized nations.”  Massachusetts Provincial Congress, To the Inhabitants of Great Britain, April 26, 1775

“… it being of the greatest importance, that an early, true, and authentic account of this inhuman proceeding should be known to you, the congress of this colony… think it proper to address you on this alarming occasion.”  Massachusetts Provincial Congress, To the Inhabitants of Great Britain, April 26, 1775