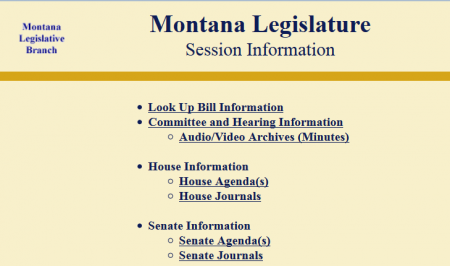 Today, the Montana Senate gave final approval to a bill seeking to block enforcement of future federal gun control measures. The vote was 27-22.

Introduced by Rep. Art Wittich, House Bill 203 (HB203) prohibits the state “from enforcing, assisting in the enforcement of or otherwise cooperating in the enforcement of” a federal act enacted on or after Jan. 1, 2015 that “prohibits, restricts, or requires individual licensure for ownership, possession, transfer, or use of any firearm or any magazine or other ammunition feeding device.”

The bill passed the state House last month by a vote of 58-42 and will now head to the governor’s desk for his signature. If he does not sign or veto the legislation within 10 days of bill transmittal, HB203 will become law without his signature.

Wittich said the measure was necessary in light of recent executive orders coming from the White House.

“The bill’s critics initially claimed that HB203 was an unnecessary and speculative measure,” he said. “However, some of the recent actions by Congress and the Obama administration attacking the Second Amendment and firearms freedom make the passage of this bill more urgent and necessary than ever.”

Introduced by Sen. Kelli Ward, Senate Bill 1330 (SB1330) would prohibit state agencies and employees from enforcing – or even assisting in the enforcement of – any new “federal act, law, order, rule or regulation” that restricts ownership of a personal firearm, firearm accessory or ammunition within Arizona.

“We have to remember as legislators, it’s our job to check unconstitutional federal laws that come into our state,” said Ward during debate on the bill Tuesday.

Based on James Madison’s advice for states and individuals in Federalist 46, a “refusal to cooperate with officers of the Union” serves as an extremely effectively method to bring down federal gun control measures because most enforcement actions rely on help, support and leadership in the states.

Both of these bills rest on a legal doctrine known as anti-commandeering, a principle upheld by the Supreme Court from 1842 to 2012. The Court has consistently held that the federal government cannot “commandeer” state resources or personnel. The landmark case was the 1997 decision in Printz v. US, where the Court held that local law enforcement could not be required to enforce the Brady Gun Control Act for the federal government.

The Federal Government may neither issue directives requiring the States to address particular problems, nor command the States’ officers, or those of their political subdivisions, to administer or enforce a federal regulatory program. It matters not whether policymaking is involved, and no case-by-case weighing of the burdens or benefits is necessary; such commands are fundamentally incompatible with our constitutional system of dual sovereignty.

Several other states are considering similar bills, building momentum and support for the effort to block federal gun control at the state level.

“We know from experience that when ten or more states pass laws that seek to block federal acts, the federal government has an extremely difficult time with enforcement,” Michael Gibbs of ShallNot.org said.