“VIGILANCE WILL FOREVER BE REQUIRED” 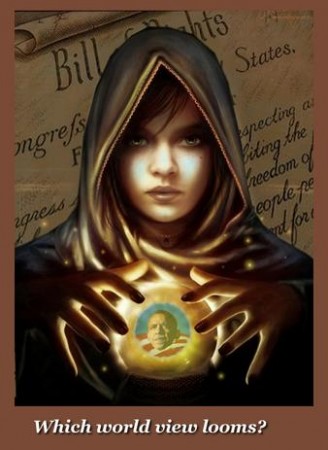 (Mar. 9, 2015) — Over the centuries mankind has developed technology, made amazing breakthroughs in science and medicine.  We have just barely begun to understand the spectacular vastness of the world God has given us. His heavens, our universe.

Through those thousands of generations most conditions of the human existence have changed, and mostly for the better.  Some, but not all, societies have become more civilized, at least on the surface.  But what has not changed is the fundamental desire by a few to dominate the many.  And too, residing in the many  is their ability, despite warning signs darkening the skies around them, to exist like grazing sheep in blissful green pastures of complacency and ignorance.

This has and always will leave a void at the top of the food chain.  The aggressively brutal few will band together like packs of wolves ready and all too willing to conquer and devour those who choose the complacent grass of apathy in lieu of the hard work of vigilance.

They call it “flawed”!

There are those, we see them every day, we hear them more and more forcefully, working to undermine and devalue our Constitution. They call it a “flawed” document.   It is flawed, in their view, because it provides protection for you  against them while standing as a dire warning, portending what could be, what would be, without it.

It is they who are flawed.  If we allow, ignore or excuse those flawed individuals to dilute or remove our Constitution,  it would be tantamount to opening the door to the remnants of violent ages gone by.  It is they who will infest the body of liberty with parasitic tyranny as they live like kings off the bounty of your labor and consume you at whim.

When most of us were young and being schooled on history, wars and human domination, those epochs were considered by most of us to be ancient history, and we knew the world was no longer like that.  We knew because we saw good people, like Lucy and Desi and Bob Hope on our television sets.  Life was good. Bad was vanquished.  Learning about the Founding Fathers was boring. Not important. Life was good.

Now, all grown up, having worked endless hours, year after year, many without even a few days off for a vacation, we raised great children and relished in the birth of theirs.  We find ourselves not enjoying our well-earned “back nine,” but living in fear and regret.   Fear for those children and grandchildren and the regret of past apathy.  For it was us, living the good life, believing our parents had ended all evil, who ignored the darkening skies.

This new generation has inherited an obtuse and benign view of life by way of easy living, busy but carefree parents, and never having had to live through or endure the evil of mass murdering dictators or powerful invasive governments and politicians.

Short of what may be the inevitable, what can we now do to wake up the generation we have spawned and insulated?  It may not be possible to get them thinking about and understanding the perils that surely lie ahead.  We love our children. We love our country.  The thought that misery and pain, death and destruction may be the only pathways to a willingness to understand and protect our country and its future weighs heavy on our hearts.

While restoration of America, to that which it was and can be again, is worth any sacrifice, our generation now dreads the possibility that it will be our children providing that sacrifice.

That is why we gray-headed patriots have put away the golf clubs, slid the rocking chairs into the spare room, ignored the bus trips to the casinos and have begun to tweet and Facebook.

We are educating ourselves on the workings of the local, state and federal governments even as we learn to despise almost everyone we encounter in that endeavor.   We have  organized groups to watch the scoundrels and we have prepared counter-measures to stop those who refuse to desist imposing illegal power over the future of our children.

Understanding the Constitution in terms of the protections it provides for the people and the restrictions it imposes on the government is extremely important.  It stands alone in the history of the world’s civilizations as a beacon of hope and liberty.

But it does more than protect.  It stands as a warning of what could be, by clearly identifying what can’t be.  The Declaration of Independence announces loudly and clearly our right to life, liberty and the pursuit of happiness, holding them as truths, not gifts or rewards.  That declaration is an alert to everyone who might read those lines and that while they may have been self-evident to our Founders, vigilance will forever be required to maintain and keep them.

Lately, much has been written and discussed concerning the Bill of Rights, the first 10 Amendments.  The reason it has been getting so much attention is that most of them have been under attack from those previously-mentioned flawed politicians.

The 1st Amendment is curiously written in that it specifically warns Congress not to establish a religion or to abridge the exercise of it.  Congress is also warned that free speech shall not be abridged.  While it demands that the Congress must behave, it is also a stark warning that these rights are fragile and rarely anywhere in the world are they protected.

The 2nd Amendment does not uniquely assert, as does the 1st, that Congress not infringe on our right to self-protection.  It says no one may do so.  That would be the Federal Government, the usurper squatting in our White House, the sovereign states and their legislatures nor anyone, elected or appointed.  This Amendment does not give the people the right to bear arms. It prohibits any infringement of that right.

The 14th Amendment, which was ratified almost 75 years after the first 10 and is not technically part of the Bill of Rights, is the single most important addition to the original Founding Documents.

Any violation of the first 10 is also a violation of the 14th.  This is true particularly for the 1st and 2nd Amendments.  Any illegal action, such as legislation, regulation or enforcement of laws which violate either of them also violates the 14th.  In a sense, one illegal edict by those who would violate either the 1st or 2nd  Amendment is, in reality, committing two crimes with one action.

Paragraph 1 of the 14th states in part; “No State shall make or enforce any law which shall abridge the privileges or immunities of citizens of the United States; nor shall any State deprive any person of life, liberty, or property, without due process of law; nor deny to any person within its jurisdiction the equal protection of the laws.”

And Paragraph 5 appears to give the Congress, without approval from the Executive Branch, the authority to stop any such violations.  It States:  “The Congress shall have power to enforce, by appropriate legislation, the provisions of this article.”

It is pretty clear that the Congress has not only the standing and the authority but also the duty to write and enforce legislation that would shut down, once and for all, violations of our rights by Barack Islam Obama or any President or any state legislature.

Any bets on just when they will get started on  that?

The Constitution – Protects and Portends added on Monday, March 9, 2015