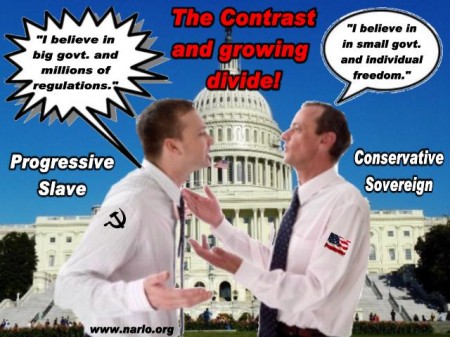 “I was born a sovereign.  No one owns my body or my soul.  Not a person, not a group and certainly not a government or a nation because neither of these are the cause of my existence.  My allegiance to that nation is my voluntary choice.  Although I am part of a nation, by nature I am a free spirit and that free spirit belongs to me and no one else.  The nation of which I am a part does not own me and I only owe that nation what I choose to give freely and of my own volition.  I only do so because I believe that nation shares my code.”

Based on a recent report from the DHS, that makes us a right-wing sovereign citizen extremist and that, in the eyes of the DHS, the left and Obama, is an imminent and existential threat to America, even a greater threat than the Islamic terrorist group known as ISIS.  Or perhaps, ladies and gentlemen, this is just left-wing paranoia.

If DHS and Obama have their way, we and many other conservatives will be labeled as domestic terrorists and put on the no-fly list, or possibly even rounded up and “put away.”  We will be worse than Bill Ayers and Bernardine Dohrn, unrepentant members of the Weather Underground and friends of Obama, who both became tenured professors at American colleges ….. in Chicago.  We conservatives will be worse than Ayers and Dohrn because we are a direct threat to the Progressives’ stranglehold on American political power.

The Progressive left in America, having had almost virtual and total political power in America since Progressivism was born in the early 1900’s, is now seeing a significant challenge to its perpetual rule.  Their arguments for the virtues of Progressivism are disintegrating before their eyes, as the “eyes” of millions of Americans begin to open to what Progressivism has wrought on America, whether it was at the hands of Presidents Wilson, FDR, Johnson, Carter, Clinton, or Obama.

Much of that paranoia from the left is played out in their growing baseless attacks on conservatives.  Everyone on the right, according to progressives, especially those bigoted, homophobic and hateful Tea Party groups, is the antithesis and the mortal enemy of a compassionate, progressive America.  These right-wing groups must be defeated by all means, including calling them right-wing extremists and listing them as an imminent threat to American security by the Department of Homeland Security (DHS).

One of the first attacks on conservatives from DHS came from then-Secretary of DHS, Janet Napolitano, when she released a report detailing who right-wing extremists were.  The April 7, 2009 report was titled:

Fueling Resurgence in Radicalization and Recruitment”

The report cited DHS’s concern of the high volume of gun purchases.  One might ask, why are Americans buying guns and ammunition at an unprecedented rate?  Could it be that millions of Americans fear the rise of government tyranny under Obama, Holder (DOJ), Johnson (DHS), Koskinen (IRS), Reid and Pelosi?

DHS fears Christian Identity Organizations and extremist members of militia groups.  And if you oppose abortion or illegal immigration, you are also a right-wing extremist.  If you think that government should follow the constitution, you are on that extremist list as well.  Now that really is extreme if you think that government should be governed by our founding documents!  We conservatives, as viewed from the distorted window of progressives, are a pox on a heavily-regulated, top-down-organized, irrationally compassionate and bankrupt collective of compliant robots.  Now why does that last sentence sound a lot more like socialism, communism, fascism or slavery than freedom?

DHS just piled again on top of Janet Napolitano’s right-wing extremist report from 2009.  In a new Intelligence Report released at the time of Obama’s Extremist Conference in Washington, DC this February, DHS re-emphasized the great threat from sovereign citizens and other right-wing extremists groups; you know, like those opposed to the New World Order, or Christian Identity Organizations.  God forbid someone would be a Christian and take issue with the way government is running itself into bankruptcy and forcing American citizens into abject slavery.  The timing of the release of the latest DHS report was no coincidence.  (Intelligence Report: http://www.cnn.com/2015/02/19/politics/terror-threat-homeland-security/)

That good ‘ole patriotic, progressive organization called the “Southern Poverty Law Center” (SPLC) is mentioned in one news report about the most recent DHS Intelligence Report.  “Mark Potok, senior fellow at the SPLC, said that by some estimates, there are as many as 300,000 people involved in some way with sovereign citizen extremism.  Perhaps 100,000 people form a core of the movement, he said.”

Mark Potok, his boss Morris Dees and SPLC are shills for the left and have had direct access to the current and past Democrat presidents and their administrations.  SPLC gave diversity and hate-group classes at Eric Holder’s DOJ and other law enforcement agencies across the country.  SPLC is also a fund-raising machine where they raise millions of dollars for the sole purpose of raising money.

SPLC is great for issuing its own intelligence reports by lumping hate groups on their lists, with patriotic groups.  Yes, our group, the “National Association of Rural Landowners,” had the distinct privilege of being labeled by the SPLC as, God forbid, a patriotic group, where “patriotic” is a pejorative.  We have had our own troubles with SPLC and have written extensively to them and about them, even threatening a lawsuit at one time.  Here is an excerpt from one of those articles: (http://www.narlo.org/splc.html)

“The Southern Poverty Law Center (SPLC) (a very, very, very left-leaning organization) has taken it upon itself to “point out” just who these right wing “patriot” groups really are and their definition of the word patriot is equivalent with sedition, or acting with intent to overthrow the government of the United States.  If you just happen to be vocal about criticizing the government (or God Help you, Obama himself) and equate his and their policies to the acts of a tyrant, a dictator, or a socialist/Marxist, you are, no doubt, on the SPLC’s list, for all to see, especially for the Obama administration and all federal law enforcement agencies.  Are you on SPLC’s list?  Have a look see: http://www.splcenter.org/get-informed/intelligence-report/browse-all-issues/2010/spring/active-patriot-groups-in-the-united-s   You may be surprised to find your ‘patriot’ organization on the list.”

The gap between lawful conservative citizens and local, state and the federal government is growing wider each day, egged on by the progressives and the left-leaning media.  Violent clashes are going to happen if government and law enforcement do not back off from challenges, confrontations, unlawful arrests and detentions of conservatives and the continuous, relentless barrage of vicious propaganda and verbal attacks against conservatives.

Remember in our “We Shall Comply No More Forever” article we wrote:

“If you see no reason to resist government, one day you will find yourself in handcuffs being led away to jail and you will be wondering why.  Or, your kids will be taken away from you.  Or, you will be forced to have an identity RFID chip implanted under your skin, or in your ear lobe, or a number tattooed on your arm.  OR, one day you will wake up to find that you are being forced to buy health insurance by government.”

It’s getting worse.  There are bills in Congress right now to:

That’s not the half of it.  There are rules being drafted in the Federal Communications Commission to TAKE OVER the Internet.  There are already rules drafted by EPA to cut back the use of coal to meet absolutely arbitrary CO2 emissions in response to the fraud that is man-caused global warming.  And the president wants to ban bullets by executive order, or ATF directive, in violation of the 2nd Amendment.

Who is lobbying for these laws and rules?  Progressives/Liberals/Democrats!  And you still think Americans are free?

In a recent article by Kit Lange from the “Battle for Washington State” covering an arrest incident in Spokane, WA, she wrote:

“What the federal agencies need to understand is one very simple thing:  We are not terrorists.   We are non-violent, and we are peaceful.   We want nothing more than to be left alone to live our lives in freedom.   We have families and we have homes.   We want no fight; not today, not tomorrow.   No Fort Sumter’s.   No Oklahoma City bombings.   No innocents.   No offensive violence.   That is our creed and we will live by it.”

This is a growing sentiment among conservatives all across America.  Violent clashes are inevitable if these words by Kit Lange are not heeded at every level of government.  The Bundy ranch standoff by armed citizens with over 200 heavily-armed BLM storm troopers almost became one of those violent clashes.

Whatever conservatives call themselves, be they sovereigns, free citizens, the right, Libertarians, or Republicans, they are not an imminent threat to a free America, …..

they are only an imminent threat to the Progressive ideology in America.

Besides the threat of the Progressive ideology, one of the other real threats to American freedom and sovereignty is the ignorance and apathy of the younger generation.  If the younger generation has no idea where we came from, who we fought to get here, who the president or vice president is, who won the Civil War, or the principles upon which America was founded, America has no chance to survive as a free nation because, you see, that younger generation will be the leaders of tomorrow.  From a recent Texas Tech University recorded interview with students, apparently all the students really knew was that Snookie acts in “Jersey Shore.”  That’s it!  They knew nothing about America.  And these dolts will be the leaders of the next generation?  (source:  http://safeshare.tv/w/oHbxeOtsOP )

Strangely, or maybe not so strangely, ignorant people who know nothing about America and why it has been so successful up until now are easy prey for the Progressive ideology.

One of the major reasons why the young are so ignorant and apathetic is the corruption of the American public education system that has been hijacked by the Progressive ideology.  Need we mention Common Core State Standards?  But the corruption is not limited to public education or our liberal colleges.  Corruption has infected all of our government institutions at every level, and if corruption cannot be controlled, it will only get worse, and, ladies and gentlemen, it is.  We are going after that corruption on a grand scale with the “Exclosers” organization.  To learn more about our efforts, click HERE.  Also, be sure to check out our new book, “How To Free America In 5 Years – One County At A Time.”  The book is an integral part of our corruption-exposing efforts.

2 Responses to "The Great Sovereign Threat to America’s Left"