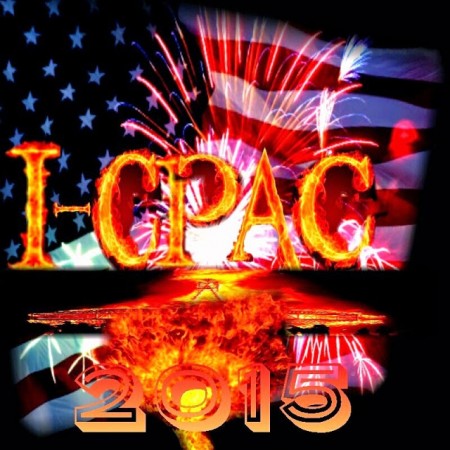 (Feb. 28, 2015) — The ruse or subterfuge of #CPAC2015 (Conservative Political Action Conference 2015) is that the organizers refuse to support the very stalwart foundation of the United States Constitution in the demands for a ‘natural born Citizen’ in the Office of the President, or invite anyone to speak at the conference who embodies the conservative nature of which this very important principle rest as a national security measure for our Nation. The deception this year was actually worse than last year when the Republicans had some kind of an excuse not to call for hearings on the ineligibility of Barack Hussein Obama because the Democratic Party controlled the trial house of Congress or U.S. Senate.

Hannity: Alright, I want to warn everybody. I am asking this question because I know the liberal media will. So might as well get it out of the way for them. That’s my job; I get paid to do that.

Cruz: No, I have not stopped beating my wife. (Laughs) (Crowd Laughs)

Hannity: Ok ,Your mother was an American citizen, you talked about your Dad coming from Cuba. You were born in Canada. You had dual citizenship There are a bunch of Liberal birthers out there that would try to make the case that your not eligible? Just a quick.. short answer.

Hannity: Ok.. now we’re going to do our quick lighting round cuz were running out of time…]

Believe it or not, the perfect answer comes directly from a highlighted I-CPAC2014 VIDEO that I made which really directed the message right at Sen. Ted Cruz back in 2014!

Like a “candid camera moment” or a ‘Precious Moment,” Cody Robert Judy candidate for President created I-CPAC AMERICAN 2014 so that you could tell the GOP just how unhappy you are with their “conservative” stand on ‘principles’ of the Constitution.  Cody as a Presidential Candidate in 2008 took Obama and America’s most unpopular U.S. Senator according to a recent poll by Fox, Sen. John McCain to task in 2008 for not being a ‘natural born citizens’. McCain having been born as a native son of Panama and being naturalized 11 months after his birth by a Congressional Act, and then receiving his ‘natural born citizenship’ from his good ole boys club in non-binding U.S. Sen. Resolution 511 in 2008 sponsored by none other than Sen. Hillary Clinton and Sen. Barack Obama. Judy proceeded to the United States Supreme Court in Judy v. Obama 12-5276 in 2012 and 2013 without so much as a hearing.

It’s understandable, then, that Cody has actually stood fast upon the principles of the Constitution wherein only a ‘natural born citizen’, born in the U.S. to Citizen parents, was qualified for the Office of the President. Mr. Judy has stood up time and time again asking Republicans to hear his case in Congress presented with the evidence of professional law enforcement witnesses in Sheriff Joe Arpaio’s Cold Case Posse, which many of the courts defer the issue to on the basis of the political question doctrine. 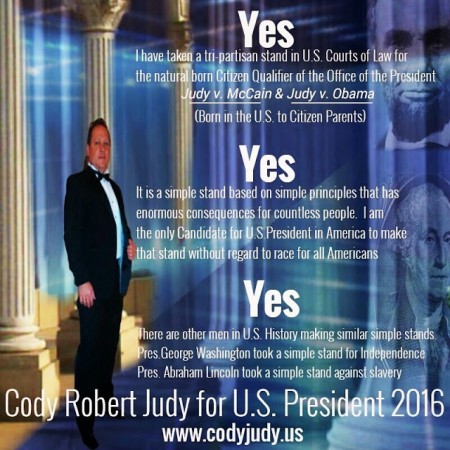 REPUBLICANS TAKE OVER HOUSE AND SENATE IN 2014

Now Americans, facing huge premium increases with Obamacare not being able to keep doctors as they were promised by Obama are faced with the dilemma that the Republican Party has not called for hearings on Obama’s ineligibility which would in fact halt Obamacare mandates as not being signed by a legal president. Instead Sen. Cruz rambles on he will be the savior to the American people by offering promises as an ineligible candidate for President himself.

Its as if the American People are seeing in front of their eyes the whole reason the U.S. Senate controlled by Republicans now have not called for a hearing on Sheriff Joe Arpaio’s Cold Case Posse’s report finding many deceptions in Obama’s long form fabricated birth certificate and draft registration, that being to protect Sen. Ted Cruz’s ineligibility!

I-CPAC 2015 Ignites Patriot Fires Across the USA – Cruzing in the Birther Crosshairs added on Saturday, February 28, 2015