(Feb. 24, 2015) — I’m disappointed, but not surprised, that the most important story of the month is receiving scant coverage from mainstream media outlets. We are witnessing, AGAIN, the abject failure of socialism right in front of our eyes and some in the media are treating it as if it’s a lost puppy story.

How many more are going to suffer under the yoke of this broken and failed ideology before it meets the scrap heap of history? Socialism’s failures have been epic in proportion and the body counts and economic destruction left in its wake are staggering. There are few thought systems that can lay claim to the societal destruction that socialism has wrought.

Socialist President Nicolas Maduro of Venezuela is now arresting and jailing political opposition to stave off a potential coup in Venezuela. Although Venezuela has some of the world’s largest oil reserves, there are bare shelves in their supermarkets, hyperinflation is ravaging their currency, street crime is reaching epidemic levels, and the Venezuelan economy is in shambles.

Socialist President Francois Hollande of France has done a u-turn since arriving in office promising more socialism. What he is now promising is more economic freedom as he prepares to seek another term and realizes that socialism sounds great to some people in theory, but feels really painful to everyone in the real world. His “millionaires’ tax” failed, his spending plans failed, and his “grow government and shrink the individual” plans failed. Now he needs votes so freedom has developed a nice ring to it. Convenient?

Socialist Prime Minister Alexis Tsipras of Greece was recently elected on a socialist platform yet, when he took office he was promptly humiliated by the European Union, the ECB and the IMF who threatened to cut off the massive sums of money the profligate Greek government needs from them to stay afloat. All of his promises of bigger government programs and government salvation have fallen flat because, as Margaret Thatcher warned, “The problem with socialism is that you eventually run out of other people’s money.” 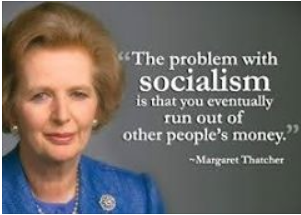