“IF WE HAD A REAL PRESIDENT” 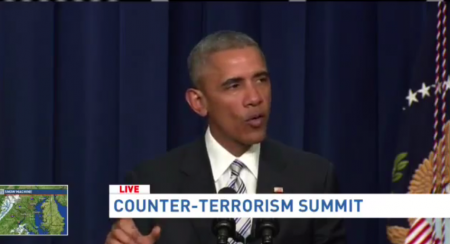 (Feb. 19, 2015) — We must do more than stand strong against radical Islam – ISIS and its murderous relatives. We must use our intelligence and combine real efforts with Israel, Egypt, Jordan and Libya to strike ISIS businesses, training camps, arms facilities, leaders and everything related to them and their support…now.   Their burning cages, knives, guns and mosques need to be turned into parking lots.

As it is now, we don’t even have a president who will stand, and as The New York Post cover says in loud neon, Obama just doesn’t see Islamic terror. Instead we see a president, in the face of people being burned alive and Christians getting their heads chopped off, at an Islamic conference — once again insisting on separating terror from Islam. That is only after he made sure he got several days of golfing in Palm Springs.

Jordan, Libya and Egypt have been bombing ISIS to pieces and flying fighter jets everywhere attacking Islamic terrorists where they find them, but America is AWOL.

If we had a real president who wasn’t siding with Islam, funding terror and was not corrupt, we would have had an immediate and bold confrontation statement with a swift action plan in response after ISIS ramped up burning dozens of victims alive in cages, then beheading 21 Coptic Christians. As Obama has played, dozens more are continuously kidnapped, children are sitting in a cage ready to be torched and more torture and beheadings are planned. Naturally, it will all be video-taped and spread around the world.

ISIS and its Islamic relatives are emboldened and gaining power and strength as they ruthlessly torture and murder more and more “infidels.”

It is morbidly impeachable that Obama does nothing but barely speak (always too late) with empty words. It is obvious he doesn’t have the will, desire or plans to lead or act in time that makes a “hill of beans” difference. What if the beheadings had been reversed and Christians had done this to 21 Muslims? Rev. Franklin Graham asked this question as well. The world would have been on fire if this had been a reverse scenario; 9/11’s would be in every major city in America over and over.

I demand and call on Congress, our Generals and anyone in leadership who cares to keep his head on to do something now! Coordinate our awesome intelligence with Israel and Egypt and start wiping ISIS and Boko Haram out, for starters. Then make a clear message around the world, with the Islamic Caliphate building in full force supported and funded by most Muslim groups, that your turn is coming.

Obama has made it most clear whose side he is on and it isn’t America, God or freedom. Leaders – House and Senate…demand Obama be made accountable and demand a bold and real response to the growing danger of radical Islam before children are thrown in cages in America and burned alive. I wonder if Obama would stop his golf game for that???

America must lead and stand against this growing evil, not watch from afar.

Join me at my new time for my national radio show from 10:00 AM to 1:00 PM PST Mon-Friday. Very soon you will be able to listen live through my website again at www.therothshow.com or on a talk station near you. Stay tuned.

No More Talk – Parking Lot Time for Radical Islam in All Its “Names” added on Thursday, February 19, 2015