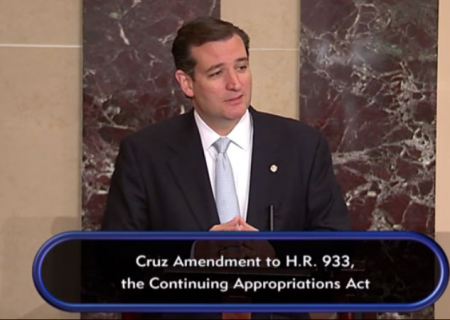 Although noting that in her opinion, Cruz is a “smart man and fiery orator,” she expressed bewilderment that “he has high unfavorables and low support, but the reasons are less clear.”

Since 2013, many in the blogosphere, alternative media, and mainstream media have raised the question of whether or not Cruz is constitutionally eligible for the presidency given that he was born in Calgary, Alberta, Canada to a U.S.-citizen mother and Cuban-citizen father.  Scholars, pundits, writers and bloggers appear divided on the issue, with Fox News contending that Cruz is eligible before The Dallas Morning News first raised questions about his reported dual citizenship in August 2013.

In a letter from John Jay to George Washington, who was chairing the Constitutional Convention in Philadelphia in 1787, Jay wrote that a “strong check to the admission of Foreigners” to the office of the presidency would be “wise & seasonable,” opining that no person “but a natural born citizen” should be eligible.

The citizenship requirement for U.S. Senators and Representatives is stated in Article I, Sections 2 and 3 of the Constitution as “a Citizen of the United States,” but not a “natural born Citizen.”

In modern times, it has generally been understood that a person had to be born in the United States to be considered “natural born.”  However, since the 2008 presidential campaign of Barack Hussein Obama, many have questioned his eligibility on two fronts:  that there is no proof he was born in Hawaii, as he claims, or anywhere else in the United States, for that matter; and that his claimed father was a citizen of a foreign country for his entire life.

Beginning in April 2009, the Congressional Research Service (CRS) attempted to reason that Obama and his former opponent, Sen. John McCain, who was born in Panama to two U.S.-citizen parents, were eligible for the chief executive position.

However, legal scholar Joseph DeMaio analyzed the CRS memos written by Jack Maskell between 2009 and 2011 and found that the author omitted key wording in his treatises which indicated in the court cases he cited that the citizenship of the parents played a role in determining the status of the child, thereby misleading the reader into perceiving that a simple birth on U.S. soil was judged sufficient by the court.

At least one law professor and one presidential candidate and litigant disagree that McCain was eligible.

On May 2, 2013, Fox News’s Sean Hannity interviewed Cruz as a brand-new senator and posed the question of his presidential eligibility, in response to which Cruz claimed that he was “a citizen by birth,” also stating that he would leave the question “to others to worry about.”  Hannity then responded, “I hear ‘birther’ cries mounting on the left” in an apparent reference to those who do not believe that Obama is eligible.

A website advocating Cruz for president states that because he presumably inherited U.S. citizenship from his mother, who reportedly met the requirements to pass on U.S. citizenship to her child, he is eligible.  However, no mention is made of the different placement of the terms “citizen” and “natural born Citizen” in the U.S. Constitution.

On May 19, 2013, relying on a CRS “expanded” report, Fox News wrote that “Obama’s eligibility was questioned by a group of people labeled birthers because they though [sic] his Hawaii birth certificate was fake and that he was born in Kenya. His mother was from Kansas and his father from Kenya,” failing to report that a criminal investigation had pronounced Obama’s long-form birth certificate and Selective Service registration form “computer-generated forgeries” beyond the standard of probable cause.

The investigation has continued and burgeoned into a second criminal probe launched by Maricopa County, AZ Sheriff Joe Arpaio, who has not yet made his discoveries public.

On May 1, 2013, The Atlantic assured its readers using the same CRS memo as its basis that Cruz is eligible.

The Post & Email has contacted the Republican National Committee for comment on the “natural born Citizen” question on two occasions and received no response.

On August 18, 2013, The Dallas Morning News reported that Cruz had provided a copy of his original birth certificate from Canada and claimed not to have known that he was granted Canadian citizenship at birth by that nation’s laws.  Reporter Todd Gillman claimed that Cruz also possessed U.S. citizenship and obtained a U.S. passport in 1986 to travel abroad but showed no documentation of those claims.  While noting that Cruz was apparently born a dual citizen, the Morning News did not acknowledge that Obama claimed dual citizenship with the U.S. and Kenya at birth on his “FighttheSmears” website which is now offline.

Four days before the Dallas article, CNN reported that the question of Obama’s eligibility was “a moot point anyway since he’s in his second term in office.”

Cruz’s media office did not respond to inquiries from The Post & Email about whether or not Cruz can prove that he is a U.S. citizen.

Today, the U.S. State Department requires a U.S.-citizen parent whose child is born in a foreign country to file a Consular Report of Birth Abroad (CRBA) so that the child can be registered as a U.S. citizen under certain conditions.  Cruz has shown no proof of U.S. citizenship at birth, although when renouncing his Canadian citizenship last year, the form he would have had to complete asks if other citizenship is possessed or will be obtained within the near future.

Stephen Green, a Canadian immigration attorney, had stated of Cruz’s situation in 2013 that renouncing Canadian citizenship is a simple process but one in which the Canadian government seeks to ensure that the person so renouncing will not be rendered “stateless.”

Maryland citizen Tracy Fair has challenged the presidential eligibility to the U.S. Supreme Court of Cruz, Louisiana Gov. Bobby Jindal, and U.S. Sen. Marco Rubio, the latter two of whom were born in the U.S. to foreign-citizen parents legally-admitted to the country.  Jindal and Rubio have both been touted as potential presidential candidates whose names appear in various polls.

In 1916, attorney and later ambassador to Italy Breckinridge Long questioned the eligibility for the presidency of Woodrow Wilson’s opponent, Charles Evans Hughes, citing that Hughes was born in the U.S. to two British-citizen parents:

Whether Mr. Hughes is, or is not, a “natural born” citizen within the meaning of the Constitution, so as to make him eligible or ineligible, to assume the office of President, presents an interesting inquiry.He was born in this country and is beyond question “native born.” But is there not a distinction between “native born” and “natural born”? At the time he was born his father and mother were subjects of England. His father had not then been naturalized. The day after Mr. Hughes was born his father had a right, as an English subject, to go to the British consul, at New York, and to present his wife and infant and to claim any assistance he might need from the consul as the representative of the English government. If war had broken out between this government and England this government would have had a right to interne the father, the mother and the son as subjects of an enemy power.

In her hypotheses as to Cruz’s current lack of popularity, Rubin did not mention the question of his constitutional eligibility.  Rather, she stated:

Maybe the best thing for Cruz would be to run. There is nothing like the verdict of voters in those early states to sober up a politician. Losing is one thing; losing in embarrassing fashion is quite another. Perhaps — like Rick Perry — he needs that sort of humbling experience to redirect his focus and his approach to politics. If so, that would be to his and Republicans’ benefit.

A February 4 Public Policy Polling survey showed Cruz polling at 6%.  A Fox News poll taken between January 25 and 27 showed Cruz at 4%, Jindal at 3%, and Rubio at 5%.

Is the Presidential Eligibility Question Beginning to Resound? added on Friday, February 13, 2015

4 Responses to "Is the Presidential Eligibility Question Beginning to Resound?"