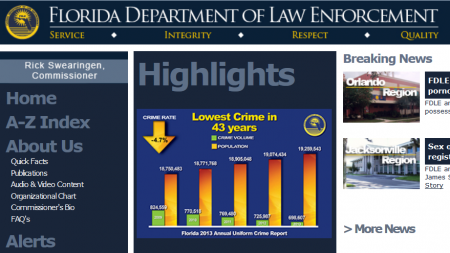 (Feb. 6, 2015) — On Tuesday, blogger and radio show host Jason Hoyt reported that a document entitled “The FDLE Political Weapon” was said to have been distributed to three cabinet officials of Florida Gov. Rick Scott.

The document reportedly was sent to Florida State Chief Financial Officer Jeff Atwater, Attorney General Pam Bondi, and Commissioner of Agriculture Adam Putnam prior to a meeting scheduled for February 5.

Reilly assumed her post in May 2013 following the passing of longtime Orange Clerk of Courts Lydia Gardner.  On February 5, 2015, The Tampa Bay Times reported that former FDLE commissioner Gerald Bailey, also referred to in the “FDLE Political Weapon” document, alleged that he was asked to falsely target Reilly by Scott’s aides in order to divert the public’s attention away from a prison-break involving “forged court documents” which made national headlines.

On Thursday, The Times reported:

Gov. Rick Scott’s aides ordered him to falsely tell the public that the clerk of courts in Orange County was the target of a criminal investigation of a prison escape, a ploy that would have shifted blame away from the Department of Corrections, which released the prisoners and is controlled by Scott.

“The most shocking thing was being ordered to target another individual without any justification,” Bailey told the Times/Herald last month, referring to Colleen Reilly, who was then the interim clerk of the office. “I don’t know why this woman was in the cross hairs.”

Reilly is reportedly now working in Texas, while Bailey and Scott are at odds with one another.

On January 17, The Times reported of the unfolding scandal involving Scott’s dismissal of Bailey:

Ousted Florida Department of Law Enforcement commissioner Gerald Bailey claims he resisted repeated efforts by Gov. Rick Scott and his top advisers to falsely name someone a target in a criminal case, hire political allies for state jobs and intercede in an outside investigation of a prospective Scott appointee.

In a new series of allegations, Bailey says former Scott chief of staff Adam Hollingsworth pressured him to claim that the acting clerk of court in Orange County, Colleen Reilly, was the target of an FDLE criminal inquiry after two prison inmates used forged papers from the clerk’s office to plot an escape from the Franklin Correctional Institution. The 2013 case embarrassed the prison system under Scott’s control.

Scott reportedly told members of the media that Bailey had chosen to leave in December, but Bailey was reportedly “forced out.”  According to Jacksonville.com, the attorney general, CFO and Agriculture Commissioner met on Thursday, February 5 to discuss the way in which Bailey’s departure was handled by Scott in apparent violation of state law.

The meeting appears to be the same meeting of cabinet officials referred to by Hoyt.

Both Hoyt and The Post & Email have covered the arrest and prosecution of Trussell, whose trial was recent rescheduled for April 14 from February 9.  A probable cause affidavit initiating Trussell’s first arrest were issued by the FDLE.

The Post & Email is not aware of the author(s) of the document and does not know its origins.

The document recounts a complaint filed by a citizen about the way in which the Common Core Educational Standards (CCES) were implemented by the Dixie County School Board which Trussell had mentioned to The Post & Email during several interviews since his arrest in September of last year.

On August 1, Trussell served as foreman as the Dixie County statutory grand jury deliberated over the complaint.  However, in apparent violation of Florida law, state’s attorney Jeffrey Siegmeister reportedly insisted on remaining in the room with two assistants.

When Trussell reported the allegedly illegal activity to two judges, he was met with no response.  Approximately ten days later, he learned that a group of concerned county citizens had convened inside the courthouse, and he presented the Common Core complaint to them, believing that the statutory grand jury was compromised as a result of Siegmeister’s alleged interference.

The document refers to the common-law grand jury as the “People’s Grand Jury under Common Law.”

Trussell also took his own complaint to the common-law grand jury, which issued two “True Bills” indicting Gov. Rick Scott, Dixie County Superintendent of Schools Mark Rains, several other education officials, a book publishing company and the Bill and Melinda Gates Foundation with “violation of oath of office,” “conspiracy to commit a crime,” and numerous other offenses in apparent connection with the implementation of Common Core.

Following the issuance of the indictments, Trussell signed them and brought them to Dixie County Court Clerk Dana Johnson, who stamped and filed them in the official court record book.

Trussell was interrogated twice by two FDLE officers several days later and arrested on September 2, charged with ten felonies.  He was jailed overnight and released on bond.

A second incarceration occurred on October 9, when Judge James C. Hankinson declared Trussell not present in the courtroom when, in fact, Trussell had made his way to the front of the courtroom after hearing his name called.

Trussell told The Post & Email that he is slightly hard of hearing and that he was seated in the back row of seats that day.

Trussell spent three weeks in the county jail prior to an arraignment hearing on a “failure to appear” charge which Hankinson then said he would not prosecute.  However, four more felony charges were added to the original ten, totaling 14.

Page 5 of the document alleges that Gov. Scott appointed Hankinson and two prosecutors to pursue the charges against Trussell and was compromised by having been named a defendant in a True Bill issued by the common-law grand jury to which Trussell took the complaint after determining that the statutory grand jury had been corrupted by Siegmeister’s interference.

On page 6, the authors of the document allege that a “complete cover-up” was initiated by Scott because he was “in a tight reelection campaign.”

The document states that the True Bills given to Johnson were removed from the court record.

The Post & Email can confirm that a two-page complaint Trussell filed with the court on August 11 of his observations of Siegmeister’s behavior in the grand jury room on August 1 no longer occupies its given place in the Record Book, as the numbers assigned to them later appeared on unrelated documents which The Post & Email received through a Sunshine Law request to Johnson.

On page 8, the document’s authors state that in Florida, “the government has unconstitutionally taken over complete control of the grand jury system. State Attorneys select the jurors they want, only give them the evidence they want them to see, and tell the jurors they can only judge the facts, not the law.  This is how overzealous prosecutors unconstitutionally and illegally convicts innocent people of victimless offenses, which by definition are not crimes. Our Founders designed our system so that juries are to be completely independent, acting as a sword and a shield for the People to keep our public officials centered under our Constitutions…”

Over more than five years, The Post & Email has demonstrated the government prosecutors control county grand juries throughout Tennessee by appointing from their own circle of acquaintances the grand jury foreman, who serves indefinitely at the pleasure of the judge but also casts a vote with the remaining 12 members of the “grand jury.”