WHAT WILL THE JURY SAY? 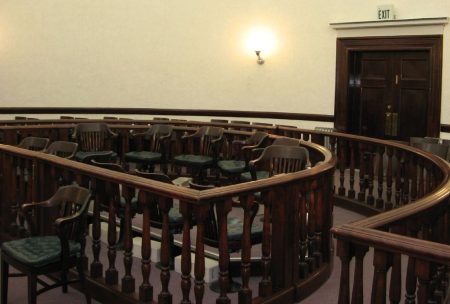 (Feb. 2, 2015) — A trial originally scheduled for February 9 at the Dixie County, FL courthouse for Vietnam veteran Terry George Trussell has been postponed until April 14.

As a result of having served as the empaneled Dixie County grand jury foreman last year, Trussell was charged with ten felonies after reporting alleged violations of law on the part of state’s attorney Jeffrey Siegmeister.  On August 1, Siegmeister had insisted on being present with his staff while the grand jury deliberated over evidence submitted by a citizen of the county alleging corruption involving Florida’s implementation of the Common Core Educational Standards (CCES).

Florida law disallows government personnel or anyone other than grand jury members from being present while the grand jury examines evidence.  If witnesses are called, the state’s attorney’s presence is then required.

The Fifth Amendment to the Bill of Rights places the grand jury in the position of providing a check on government prosecution of citizens by reviewing the evidence before either issuing or declining to issue an indictment, or “True Bill.”

After two judges avoided Trussell’s allegations against Siegmeister and Trussell perceived the statutory grand jury as compromised, Trussell took a report he had written on the August 1 incident involving Siegmeister as well as the evidence submitted on Common Core to a common-law grand jury which organized as a result of concerns over local government corruption.  The common-law grand jury asked permission to use a room in the Dixie County courthouse, where Trussell testified but did not cast a vote.

The common-law grand jury voted to indict Siegmeister and other officials for corruption, after which it issued two True Bills which Trussell took to the court clerk for filing.  At that point, Trussell previous told The Post & Email that he believed his oath of office was fulfilled and his work concluded.

In December, Judge James C. Hankinson declared that Trussell is “competent” to represent himself, as he had not secured the services of an attorney.

The charges against Trussell were not issued by grand jury indictment, but rather, by the “information” method.  He has been jailed twice since he was arrested in early September, with the second incarceration resulting from a declaration that he had “failed to appear” despite his presence in the courtroom and approaching the bench.

After his second incarceration, the “failure to appear” charge was dropped, but four more felony charges were added for a total of 14.

Trussell is being prosecuted by Section 843 of the Florida statutes titled “Obstruction of Justice,” subsection .0855, paragraphs 2, 3 and 4, “Criminal actions under color of law or through use of simulated legal process.”

Trussell has not been provided a Bill of Particulars to substantiate the charges, which include “simulating a legal process” and “impersonating a public officer.”

If convicted on all counts, Trussell, who is 71, will spend the rest of his natural life in prison.

The hearing on April 14 commences at 9:00 a.m. EST at the Dixie County courthouse.