…A REFLECTION OF AMERICA’S MORAL COMPASS 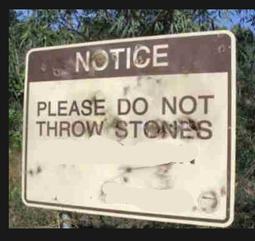 (Jan. 15, 2015) — America’s Constitutional Republic was designed by men who understood that government’s proper role was to protect our God-given rights – not to solve our problems.  Based on their belief that God is the author of our rights and that We the People grant rights to the government, they wrote these familiar words:  “We hold these truths to be self-evident, that all men are created equal, that they are endowed by their Creator with certain unalienable rights, that among these are life, liberty and the pursuit of happiness. – That to secure these rights, governments are instituted among them, deriving their just powers from the consent of the governed.

Based on the language above, our government has gone wild in many ways.

Below are just a few examples:

#1. The 216 Republicans that voted for John Boehner to once again be Speaker of the House seem to have forgotten that they are supposed to be representing their constituents.  It has been reported that over 60% of registered Republicans called their representatives requesting that they do not vote for Boehner as Speaker.  The 60% of the Republicans who called apparently labored under the misapprehension that the powers of the government still reside with the governed (them).  They found out they were wrong.

#2. One of the most assailed rights of the American people is the Second Amendment, which succinctly states: “A well regulated Militia (sic), being necessary to the security of a free State, the right of the people to keep and bear Arms, shall not be infringed.” (Emphasis added.) While some may argue about the meaning of a “Militia,” the language that is emphasized is unambiguous.  It clearly states that government does not have the right to infringe upon the people’s rights to buy and carry firearms.

Again – this is a right protected in our Constitution.  It is not a privilege.  Although our Constitution clearly states that this cannot be infringed upon, many states have done exactly that.  In light of many court decisions, including that of the nation’s most liberal 9th Circuit in Nordyke v. King, our right to bear arms has been reaffirmed over and over again, as well as court decisions stating that laws that violate constitutional rights are no laws at all.

By disarming us, state gun law regulations have inadvertently turned these states into the accomplices of those who wish to harm us.  In essence, they are guilty of reckless endangerment, which by definition includes the creation of potential danger as well as realized danger. And to be clear, “reckless endangerment” is a prosecutable offense (see www.TPath.org and  Second Amendment Preservation and Protection Act).

#3.  Our right to life is also a good example of government gone wild.  With all the incredible genius that went into the writing of the Constitution, one important failure of our Founders was the failure to recognize slaves as being 100% human.  This value compromise was made to facilitate the ratification of the Constitution and it was downright wrong* (Please see Editor’s note below) – just as wrong as the compromise government made to accommodate those with unwanted pregnancies.  In these two instances, our founders and our courts have failed to uphold government’s most sacred responsibility:  to protect life.

As heinous as our government’s failure to recognize that it governs at our consent and that it cannot infringe upon our basic God-given and constitutionally-protected rights, our role in allowing government to go wild cannot be swept under the rug.  In truth, a large portion of our population has preferred representatives who promise to give them something or to solve their problems. In the process, voters have gotten neither.  What they have gotten are representatives without values and without a moral compass that have imposed their insanity upon the rest of the nation. These men and women are expert at making what is wrong somehow seem right, all the while with two objectives: to protect their own careers and advance their own agendas.

These wolves in sheep’s’ clothing are a plight upon the American Dream, but they are only symptoms of what is truly wrong with America.  Sadly, sometimes all these wolves need to pull the wool over the eyes of the rest of us is an “R” after their name.  John Adams once said: “Our Constitution was made only for a moral and religious people. It is wholly inadequate to the government of any other.”

From the founding of America through a good part of its history, America’s Constitution served the country well.  In the latter part of the 20th century that began to change.  And not only did our government seem to be falling apart but our families were disintegrating and our cities were fast becoming areas of unrestrained violence.   All of this can be traced back to the teachings of Evolution, which question the existence of God; the rebellion of the 60’s and the introduction of drugs into our culture; the “women’s lib” movement; the acceleration of the welfare state, the sexual revolution of the 1970s, and the absurd and unrealistic glorification of socialism.

If we are to regard the words of John Adams, much of our fall is the result of a changing culture where moral and religious people are regarded as ignorant hypocrites and enemies of the magnanimous state. The conditions mentioned above facilitate the acceleration and acceptance of this destructive point of view. This has resulted in a fulfillment of Adams’ prediction and has rendered our Constitution inadequate.

It has become inadequate because we have failed to prefer Christians for our representatives; men and women who may share differences of opinions on how they exercise their faith but nevertheless hold to the same moral values.  It has become inadequate because not only have we failed to apply moral testing standards to our representatives, but we have failed to elect men and women who are committed to preserving our Constitution and God-given rights.

Worse, we have chosen to elect and re-elect well-known, and in some instances convicted felons, to public office.  If men and women in public office do not believe in God and prove it by the way they live, why do we continually expect them to regard our rights as God-given?

Yes, government has gone wild, but so have many of us.  We elect scoundrels to office and then we expect them to do what is right: honor their oath of office and protect our rights above their own careers. When they don’t, we are surprised.  If the insanity of the last few years has proven anything, it has proven that we need to reassess many of our national decisions, but that reassessment must start with an honest look at our voting habits and how they are a reflection of America’s moral and religious foundations.

We may be disappointed in the direction America has taken in many instances, but if we don’t start demanding more, we will just get more of the same.  More of the same will lead to the death of liberty in exchange for comfort and the death of the rights our Founders sacrificed blood and treasure to secure for a misplaced belief in Utopia.  In 2015 it is reasonable to say that government has gone wild.

However, government gone wild is only a reflection of an electorate that has gone wild.  Cast stones if you must, but don’t forget that you just may be living in a glass house.

* Editor’s Note:  While Ms. Salanitri’s assessment of rating humans, any human, as less than 100% is certainly admirable and understandable, the actual reasoning behind the “less than 100%” was done as political ploy to circumvent the South’s use of slaves as voters.  Those slaves would have had to vote the way they were told, or face the consequences.

So, while the concept sounds racist, in actuality it was implemented to keep slave owners from using their possessions, their slaves, to continue in their bondage.

Many have, over the years, used this strategic ploy as a tool to demonize the United States, when in fact, that may have been one of the few things any  government has ever done that actually had a righteous intent.

One Response to "Government Gone Wild"