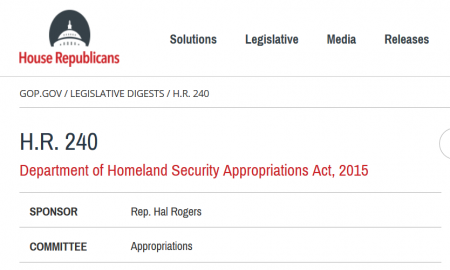 (Jan. 14, 2015) — The Republican Cloakroom, which reports on congressional voting activity under the authority of the Speaker of the House, has reported the results of the vote on HR 240 in the U.S. House of Representatives taken earlier on Wednesday.

Three amendments to the bill and two considered “sense of Congress” statements passed.  Passage of HR 240 had been predicted on Tuesday after Speaker of the House John Boehner stated that the chamber’s intentions were to “fully fund” the Department of Homeland Security (DHS) while blocking funding for Obama’s executive actions which declared that millions of illegal immigrants would not face routine deportation hearings under certain conditions, contradicting existing federal law.

Boehner said that the executive actions are “illegal.”

The bill provides an increase of $400 million to DHS over last year’s appropriations.  Funding for Immigrations and Customs Enforcement (ICE) and Customs and Border Protection (CBP) are also increased, while appropriations for the Transportation Security Administration (TSA) have been decreased.

House Majority Leader Kevin McCarthy and Boehner tweeted their opposition to Obama’s “unlawful executive actions” while the House was in session on Wednesday.

More than eight hours after the session adjourned, the majority of mainstream media outlets did not report the results.  Since before Obama took office, the media has acted as his advocate and failed to ask pointed questions about his views, contradictory statements, actions and qualifications for office.  Many mainstream journalists have actively worked to protect Obama from criticism and labeled those critical of his policies as “racist” through an articulated strategy.

Republican members of the Senate and House are now attending a strategy retreat in Hershey, PA until Friday.  Whether or not the Senate will approve HR 240 in its current form with the amendments is unclear.

If the bill passes the Senate, Obama has promised to veto it.