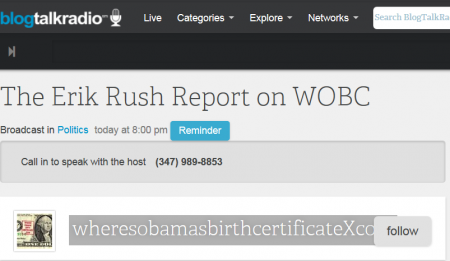 WOBC is owned and operated by Michael Volin, who launched the website WheresObamasBirthCertificate.com (WOBC) in 2008 after questions about Barack Hussein Obama’s background, birthplace and associations arose but were not investigated by the mainstream media.

Rush’s most recent column was titled “2015: Horrors Right Out of the Gate” and dealt with what he said was “the fact that black Americans have been very effectively manipulated by said liberal power brokers,” causing them to “embrace intellectual mediocrity, self-destruction, hatred and the most transparent of lies.”  He also discussed “the Obama administration’s criminality” and the results of the House Republican votes for Speaker of the House, which resulted in John Boehner’s third term in the position after 25 members revolted against Boehner’s “establishment” status.

Rush’s columns are carried by WND.

In a press release announcing tonight’s show, Volin stated that Rush will be taking live calls and plans to discuss a variety of current topics of interest.

Volin added that an update will be provided on a special project in which he has been engaged involving a “mass mailing of Sheriff’s Kits,” referring to the DVDs he has been producing for more than 18 months which contain a presentation by Maricopa County Cold Case Posse lead investigator Michael Zullo regarding the “computer-generated forgeries” of Obama’s long-form birth certificate and Selective Service registration form.

In September 2011, Maricopa County Sheriff Joe Arpaio commissioned the Cold Case Posse to investigate claims that the image posted on the White House website purported to be a scan of a certified copy of Obama’s long-form birth certificate from the Hawaii Department of Health was fraudulent.  On March 1, Arpaio and Zullo held a joint press conference during which they announced that six months of investigation had determined that there was probable cause to believe that both the birth certificate and Obama’s Selective Service form were created on a computer without any origin in real, paper documents.

Since that time, the investigation has continued, with Arpaio launching a second criminal probe at an unannounced time, the results of which he has hinted he will release if conditions appear favorable to do so.

Volin and several teams of volunteers have distributed the Sheriff’s Kits in person to members of Congress, their staffers, journalists, state legislators and others since July 2013.

Despite a second press conference by the Cold Case Posse held on July 17, 2012, Congress has refused to investigate the claims of fraud and forgery regarding Obama’s only publicly-presented documentation.