“WE WON’T BE STOPPING ANYTIME SOON” 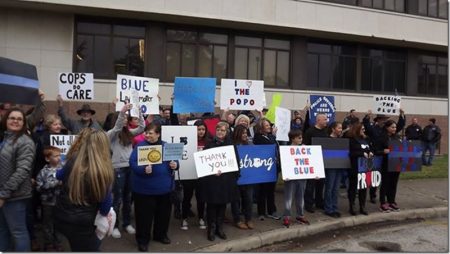 (Dec. 24, 2014) — A pro law enforcement movement called Rally For L.E. which got started in Phoenix has now spread to Houston. According to Rally For L.E.’s leader Nohl Rosen he says just as in the Phoenix metro area, more pro police rallies will take place in that city as well.

“We’re seeing a lot of anti-police protests and hatred towards the police. It’s now time the country learned there is another side that supports the members of law enforcement and cares about them. The rallies to support them will continue and we won’t be stopping anytime soon. To have what we’re doing spread to other cities like Houston is terrific and it’s needed,” Rosen said.

Rosen had recently organized a pro police rally in Phoenix which also had inspired the one recently held in Houston. He’s hoping more people will take a brave step in supporting the police because they’re the ones that lay their lives on the line to make sure our community is kept safe.

“It’s such a shame that we have people in this country that have turned against the police and are cheering for the criminals. Even the mainstream media has seen fit to attack the police for doing their job which is pretty shameful. When you call 911 it’s usually the police that will come to help you. It’s crazy that they’re being attacked now for doing that and they don’t deserve that. We need to rally behind our men and women in law enforcement and let them know they matter and that we appreciate their service,” Rosen added.

Rally For L.E. has already started a Facebook page at www.facebook.com/RallyForLE and is also on Twitter at https://twitter.com/RallyForLE.  The group’s next rally in support of law enforcement will take place on January 17, 2015 in front of Scottsdale Police Headquarters located at 8401 E. Indian School Rd.