(Dec. 22, 2014) — The Post & Email has learned through public records that CDR Walter Francis Fitzpatrick, III (Ret.) has been relocated to a prison in the northwest region of Tennessee from the Bledsoe County Correctional Center (BCCX) in Pikeville.

The facility where Fitzpatrick is now housed is the Northwest Correctional Complex (NWCX) in Tiptonville, which, according to Wikipedia, is “a maximum security prison, known for once housing mass murderer Jessie Dotson, Jr.”

Dotson was convicted on six murder charges stemming from a March 2, 2008 rampage against family members, including young children.  He had been convicted of murder from a 1994 case but was released on parole in August 2007.

Fitzpatrick’s registration states that he is eligible for parole in February 2015 and that a parole hearing took place on December 15.

Fitzpatrick was convicted in June of “aggravated perjury” and “extortion” after reporting evidence of criminality on the part of judges, prosecutors, court clerks, and the grand jury foreman to the McMinn County grand jury on March 18.  Just before Fitzpatrick was arrested, Judge Amy Reedy appointed a new foreman, and minutes afterward, the grand jury issued indictments against Fitzpatrick for three felonies and one misdemeanor.

At trial, he was convicted on the two felonies and sentenced on August 19 to three years in state prison.

Over the past five years, The Post & Email has reported on systemic corruption within the Tennessee judiciary, executive branch and sheriffs’ departments, all of which work in concert to maintain a steady flow of money used for nefarious purposes, most likely the movement and sale of illegal drugs.

After having moved to Tennessee in 2007 to assist a U.S. Army soldier from Sweetwater court-martialed and convicted of crimes while on duty, Fitzpatrick inadvertently discovered that county grand juries are rigged with individuals serving in violation of law and grand jury foremen who are appointed by the criminal court judge to serve at their pleasure.  Some Tennessee grand jury foremen have served for decades consecutively or alternating with others after having been summoned by the judge.

The Fifth Amendment called for grand juries to review evidence of a crime against a citizen before he or she could be formally charged.  If the grand jury did not find probable cause of the individual’s involvement in a crime, it issued a “No True Bill,” and a prosecution did not go forward.  A “True Bill” signified an indictment, after which the prosecutor would file formal charges.

Fitzpatrick himself was a victim of a rigged court-martial in 1991 which effectively ended his Naval career.  As in the U.S. Armed Forces, Tennessee does not give its citizens the Fifth Amendment protection of a grand jury review since its grand juries are compromised by judicial appointees who carry out the judges’ bidding.

An FBI agent to whom Fitzpatrick had brought evidence of Tennessee judicial corruption in 2010 met his complaint by laughing it off and exclaiming, “Live with it!”

Having stated that he was proud to have been born and raised in Tennessee, the agent expressed surprise that Fitzpatrick had expected trials to be “fair.”

Several articles apparently written about inmates who were killed while at NWCX have been removed from the web.

Corruption among the correctional officers at the complex has been documented by the FBI. 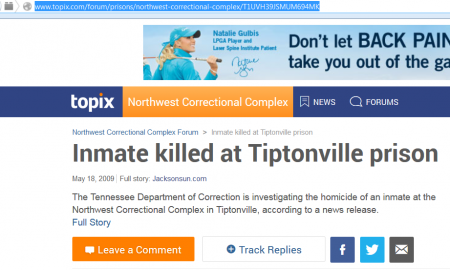 Located just over the Missouri/Tennessee state line, NWCX is likely at the greatest possible distance from Fitzpatrick’s attorney, Van Irion, whose office is located in Knoxville and who resides in Madisonville in Monroe County in the southeast corner of the state.

On July 8, a 58-year-old NWCX inmate lost his life in “an apparent homicide.”

The facility reportedly does not foster industry, but rather, community service and education.

Fitzpatrick holds a Master’s Degree in Business Administration as well as numerous awards and letters of commendation from the Navy during his 20 years of service.

Before his sentencing, Fitzpatrick had insisted on receiving no mail, phone calls, visits, or attention of any kind.