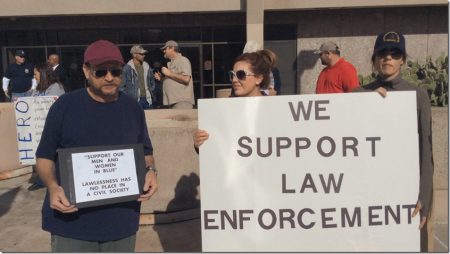 (Dec. 22, 2014) — The leader of a movement called Rally For L.E. (L.E. stands for law enforcement) has stated that their demonstrations to support law enforcement across United States will continue. Phoenix resident and business owner Nohl Rosen recently started Rally For L.E. which he hopes will take root in other cities and towns across the country as an effort to support the police.

“It’s time for a united front in support of law enforcement in this country. Right now they have received a lot of hate from anti-police protesters, outside agitators, race baiters, and unfortunately the mainstream news media. It’s unreal that these people would root for the criminals and is very pretty sad. It’s the cops that lay their lives on the live every single day to help make sure our community is safe and they deserve our thanks and appreciation. Our movement will show in the loudest voice possible that there are those in the community that support the police,” said Rosen.

Rally For L.E. began as a direct result of the recent demonstration held on December 13th in front of Phoenix Police Headquarters. The Phoenix event also sparked another rally to happen in Houston the following week and another one is scheduled to take place on January 17th, 2015 in front of Scottsdale Police Department’s headquarters located at 8401 E. Indian School in Scottsdale.

“Hopefully, our movement will hold demonstrations in every city and town in this country because it’s long overdue and quite frankly is needed pretty badly right now. Up until recently you’ve only heard from the side that’s against the police because the major media in this country seems comfortable to report only from their point of view. Now it’s time that people in this country see that there is a different side that supports law enforcement and that has the courage to rally in favor of them. This whole thing is just getting started and I’ve already had people contacting me that support law enforcement and are asking how they can help,” Rosen added.

You can find both the Rally For L.E. movement on social media at www.facebook.com/RallyForLE and on Twitter at https://twitter.com/RallyForLE. A web site is also being planned as well.