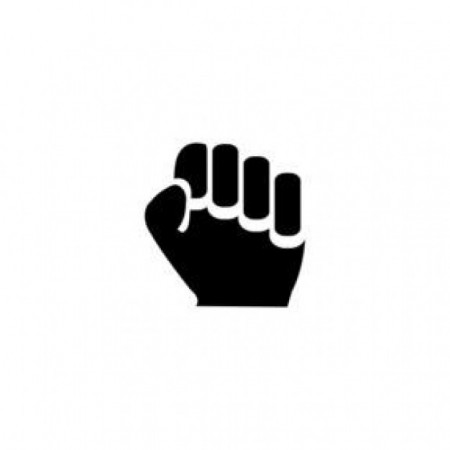 Al Sharpton was reported by Breitbart to have been the organizer of the event, the symbol of which is a closed black fist.  According to one report, the “clenched fist” has symbolized “the French and Soviet revolutions, the United States Communist Party, and the Black Panther Party for Self-defense.” Wikipedia reports that beginning in 1968, the fist signified “rebellion and militance,” “Black Power” and “sometimes socialism.”

At the same time as the New York protest, Sharpton was hosting a rally in Washington, DC to include the mother and stepfather of Michael Brown, an 18-year-old black man killed by Officer Darren Wilson on August 9, 2014 in Ferguson, MO.

Sharpton has been a frequent White House guest and apparent adviser to Obama.

For weeks, people have protested the deaths of Brown and Eric Garner, a Staten Island man apprehended for selling loose cigarettes who allegedly was placed in a “chokehold” by an officer, became unable to breathe, and then died.  In both cases, local grand juries did not find evidence of an indictable crime against the officers.

On the 13th in New York, marchers protested “police brutality” against black men and youths.

The website of the League for the Revolutionary Party (LRP) contains a photo of a banner reportedly sported by attendees at the New York protest with the slogan, “We can’t breathe!”  An explanation of the exclamation reads, “Racist Cops & Courts Enforce the Capitalist System Choking Blacks & Latinos, the Working Class & Youth.”

The LRP’s rhetoric is similar to that of the Students for a Democratic Society (SDS) in the late 1960s as evidenced by FBI files. SDS member David Gilbert, who was incarcerated for his role in the Brinks armored car heist in October 1981 which killed three people, said that the goal of the Weather Underground was “world communism” through a “violent Third World revolution” (p. 17).  Ted Gold, who was killed with two others on March 2, 1970 when bomb-making materials exploded in a townhouse in Greenwich Village, went to Cuba in November 1969, where he reportedly met with North Vietnamese “representatives” (p. 19).

Out of the SDS, a group named “Weathermen” was launched by William C. Ayers, son of Commonwealth Edison CEO Thomas G. Ayers and later renamed “The Weather Underground.”  The organization detonated landmarks and government edifices in New York City and Washington, DC.

A Weather Underground infiltrator who worked with former FBI informant Larry Grathwohl reported in October 2008 that “the Weathermen actually believed that they would be successful in overthrowing the U.S. government and that, with the help of the Cubans, Chinese, Russians, and North Vietnamese, they would occupy America. Americans would have to be ‘re-educated’ in camps, similar to what the communists did in Vietnam, Cambodia, Laos, and other countries they had taken over.”

SDS and The Weather Underground were intent on purging American “imperialism” and establishing “world communism.”  Ayers’s wife, Bernardine Dohrn, is suspected of having placed a bomb outside of a San Francisco police station in 1970 which killed a police officer and seriously injured another.

Regarding race relations, LRP says that “Integrationism is impossible under American capitalism…The socialist revolution in the U.S. can only occur if it is led by a genuinely interracialist working class vanguard party. However, we must squarely face the fact that the racial outlook of many white workers has been the major deterrent to class solidarity. White racism within the working class has been a crucial factor throughout much of American history. And, while it is often mixed with a certain sympathy and respect for Black people, racism persists to this day among large numbers of white workers. Therefore, it is with good reason that many Black workers are highly suspicious of whites and white-dominated institutions, even those which profess solidarity.”

Obama said in an interview with BET that “racism is deeply rooted in America.”  He claimed to People Magazine last week that black men, even though well-dressed, are often mistaken for hotel valets.

A tweet from an alleged MillionsMarchNYC member reported that Mall of America in Minneapolis, MN was closed as a result of protests on Saturday similar to that which occurred in New York one week prior.

On Sunday, Sharpton said that he has received death threats in the face of the murders of two New York City Police Department police officers on Saturday.  Sharpton issued a statement in which he said he was “outraged” by the point-blank shootings of the officers as they sat in their patrol car in the Bedford-Stuyvesant section of Brooklyn.

Obama has connections to Ayers, who launched Obama’s Illinois state senate campaign in 1995, and Black Liberation Theology through his former pastor, Rev. Jeremiah Wright.  Obama’s attorney general, Eric Holder, participated in an alleged armed protest at Columbia University against “a ‘lack of concern for Black people whether they be students or workers’ and a ‘general contempt towards the beliefs of Black students in particular and Black people in general’” by taking over an empty ROTC recruitment area in a “five-day occupation.”  The students’ demand was to rename the center for slain Muslim civil rights leader Malcolm X.

Holder has vocally decried gun violence during his lengthy government career.  He has called blacks “his people.”

Sharpton and his supporters are calling for “peaceful” protests.

Who is Really Behind Police Brutality Protests? added on Sunday, December 21, 2014

3 Responses to "Who is Really Behind Police Brutality Protests?"