IS IT BECAUSE “REVOLUTIONARIES” ARE NOW IN CHARGE?

(Dec. 21, 2014) — In an FBI posting detailing the 1975 bombing of the U.S. State Department by “left-wing” groups desirous of “social change,” the perpetrators are referred to as “domestic terrorists.”

Without naming them, the FBI reported on the activities of Bill Ayers; his wife, Bernardine Dohrn, and other members of the Students for a Democratic Society (SDS) and its corollary, The Weather Underground.

In 1969, Ayers, Dohrn, David Gilbert, Kathy Boudin, and other “revolutionaries” participated in the “Days of Rage” during which property was destroyed and confrontations with police occurred.  They were referred to in FBI files as “domestic terrorists.”  FBI files on Weather Underground members quote them as having admired communist regimes and as intending to raise a “Red Army” (p. 18).

The FBI describes the Days of Rage as a “riot” and the Weather Underground as having a “radical political agenda.”  An FBI “Public Intelligence Bulletin” which appears to have further detailed the Days of Rage leads to a Malware Bytes warning page for this writer.

In 1970, San Francisco police officer Brian V. McConnell was killed and another officer seriously injured when a bomb loaded with shrapnel reportedly placed by Dohrn exploded outside of the Park Police Station.  In 2010, former Weather Underground penetrator and now deceased Larry Grathwohl urged Congress to “bring terrorists to justice,” including Dohrn.

My greatest fear today is that the Department of Justice (under Obama appointee Eric Holder) will protect these terrorists by blocking an attempt to bring them to justice,” Grathwohl said. “Consider that President Obama held his first fundraiser at the home of Bill Ayers and Bernardine Dorhn when he was running for the state Senate in Illinois.
In 2008, WND reported that Ayers had told Grathwohl where Dohrn had placed the bomb.
Ayers and Dohrn raised three children, the oldest of whom was “named after Malcolm X and a 19th century Apache chief.”  Malcolm X is also described as “a revolutionary.”  Some believe he is Barack Obama’s biological father.

Ayers and Dohrn were admittedly involved in identity fraud and hiding from the authorities for approximately a decade. Much information about them appears to have been scrubbed from the internet.

Ayers and Dohrn may have assisted Barack Obama to attend college.

The FBI appears to have no file on “William Ayers,” despite a reference to the last name “Ayers” yielding a 153-page report on the Kansas City Massacre of 1934.  However, a search of the FBI’s website under “Bernardine Dohrn Bill Ayers” shows files maintained on “Weathermen” and “Weather Underground” in which Ayers is mentioned.

A 1976 FBI file reported that in 1969, on the campus of the University of Oregon at Eugene, Ayers promoted two trips to Cuba involving “about 75 SDS people on each trip and about 75 people from, recruited from the Black Panther Party and Young (illegible) organizations, and other black and brown organizations that will go to Cuba, are going to live and learn about the country, by going to work to create and help the Cubans create a solid economy in the face of an economic boycott by the United States…”

Last week, Obama declared, without an action by Congress, that he was “normalizing” relations with communist Cuba after an embargo in place by congressional acts for more than five decades.  Obama claimed that isolating Cuba economically “has not worked.”

“In addition to reopening an embassy in Havana, the administration plans to significantly ease trade and financial restrictions, as well as limits on travel by Americans to Cuba, by using its regulatory and enforcement powers to evade limits imposed by a congressionally mandated embargo,” reported The Washington Post on Wednesday.

An internet search for “Bill Ayers identity fraud Bernardine Dohrn” leads to the following on December 21, 2014, in which no mainstream media outlet appears to have reported on the given terms: 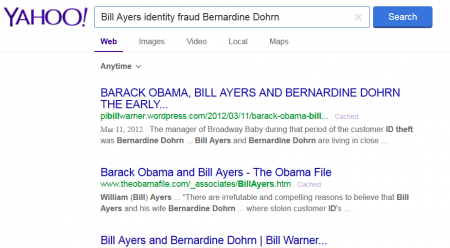 The second page of the search brings up a column written by Michelle Malkin on April 23, 2008 detailing the connections between Ayers, Obama, Kathy Boudin, the Black Liberation Army and the murder of two police officers and a security guard in October 1981.

Boudin was released from prison in 2003 on parole and began teaching at Columbia University last year, where Obama reportedly graduated in 1983.

Of the murders of the three by Boudin’s accomplices and the fund established to assist the children of the fallen, Malkin wrote, “Fight left-wing domestic terrorism. Send your check today.”

At the bottom of the second search page is an entry in The Chicago Tribune with a reference to Dohrn’s claim that more “institutions” were needed “to care for children because many children, as a result of being mistreated, are uncomfortable with the intimacy of a traditional family.”

Boudin’s son, Chesea, was raised by the Ayerses after his parents went to prison when he was a toddler.  Kathy Boudin’s father was a known communist.

In a 2013 interview, Ayers justified the Weather Underground’s bombings because “no one died.”  However, Ayers’s former girlfriend, Diana Oughton, died while making bombs in Greenwich Village.

In April of last year, Breitbart reported on the arrest warrants issued by the FBI in 1970 for Ayers, Boudin, Dohrn, and a fourth SDS/Weather Underground member, Judith Alice Clark.  Of Boudin, Breitbart wrote:

The story of Kathy Boudin’s crimes and her victims is bloody and ugly. Many details get left out or smoothed over, even by her critics. There’s a wider importance to Boudin’s story: it’s yet another example of how the left uses America’s most respected universities as both a breeding ground and a retirement home for radicals; a way to give violent ideologically driven criminals both legitimacy and a paycheck, often at taxpayers’ expense.

On November 22, 1981, The New York Times reported that those in the “underground” believed that the United States was inherently “evil” and that “revolution was coming.”  The worldview of the revolutionaries was described as “only two kinds of folk, the People and the Pigs, existed…”

A black man who murdered two police officers in New York City on Saturday had posted online, “I’m putting wings on pigs today. They take 1 of ours, let’s take 2 of theirs…”

During his 2008 presidential campaign, Obama claimed that Ayers was “just someone who lived in his neighborhood” when confronted about his relationship with the former “domestic terrorist.”  However, evidence unearthed later shows that Ayers’s school project received $2 million from three boards of directors on which Obama sat during the 1990s.

Obama ran for the Illinois state senate in 1996 and was seated in 1997.  The web page of the Illinois General Assembly has not been updated since an undetermined date at which Obama was still serving in that capacity.  Obama’s biography states that he was “chair” of the Chicago Annebery [sic – Annenberg] Challenge and a “board member” of the Woods Fund of Chicago.

Funds disbursed by the foundations on which Obama served reportedly also went to Dohrn’s Children and Family Justice Center operated at Northwestern University, where Dohrn is a law professor.  Money was also given to the South Shore African Village Cooperative, which stressed “African Centered Learning,” “Good Speech,” and “community service” to fifth-graders by means of “wise instruction.”

An apparent connection made by Fox News between an invited speaker’s comments and Obama as a board member of the Annenberg Challenge and Woods Foundation, respectively, was dismissed by an Obama spokesman in 2008 when he said, “This is another pathetic attempt by FOX News to distract voters from the economic challenges facing this nation by patching together tenuous links to smear Barack Obama.”

Obama often uses the word “distraction” in an attempt to direct attention away from a controversial topic, including that of his purported long-form birth certificate posted on the White House website on April 27, 2011, which has been found to be fraudulent by a law enforcement investigation begun in September of that year.

Other Chicago acquaintances such as Valerie Jarrett and Rahm Emanuel were rewarded by the Obama regime once Obama attained the White House in 2009.

The “New SDS” advocates the closure of the prison at Guantanamo Bay, Cuba, which is also endorsed by the man occupying the White House known as Barack Hussein Obama.  One of the groups participating is named “People’s Opposition to War, Imperialism, and Racism.”

Obama claims that racism is a “systemic” problem in the U.S.

The SDS said in its inaugural statement that it wished to see “universal controlled disarmament…as a national goal.”  Obama has advocated “a nuclear-free world,” beginning with a plan for the U.S. military to cut its nuclear force by “roughly a third.”  Reportedly, Obama has not kept his promise.

Following its leak to the press, then-DHS Secretary Janet Napolitano was forced to withdraw the report, apologize to veterans and “clarify” her intent:

…Let me be very clear: we monitor the risks of violent extremism taking root here in the United States. We don’t have the luxury of focusing our efforts on one group; we must protect the country from terrorism whether foreign or homegrown, and regardless of the ideology that motivates its violence.

We are on the lookout for criminal and terrorist activity but we do not – nor will we ever – monitor ideology or political beliefs. We take seriously our responsibility to protect the civil rights and liberties of the American people, including subjecting our activities to rigorous oversight from numerous internal and external sources…

In May of last year, the IRS admitted that it had targeted “conservative” applicants for tax-exempt status, delaying their approval or denial for years in some cases.  Conversely, the application of Obama’s alleged half-brother, Malik Obama, for tax-exempt status for his “Barack H. Obama Foundation” was reportedly approved within 30 days.

Others opposed to big government or the Democrat Party’s agenda under Obama have been unexpected audited by the IRS, including former U.S. Senate candidate Christine O’Donnell and Dr. Benjamin Carson, who gave a speech at the National Prayer Breakfast in February 2013 critical of Obamacare and from whom the White House demanded an apology therefor which Carson refused to deliver.

A link embedded in Malkin’s dissemination of the DHS report refers to a website which compares the Tea Party movement to The Weather Underground but is no longer active. 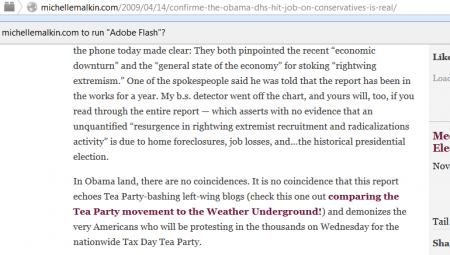 Malik Obama is said to be the chief investment “architect” of The Muslim Brotherhood, an Islamic terror group bent on destroying the United States and the West.

Three months ago, four “known” Islamic terrorists were stopped while attempting to cross the Mexico-U.S. border, after which current DHS Secretary Jeh Johnson told a congressional committee that two had “fled to Canada” to seek asylum.

In 2011, the FBI issued a bulletin which described “sovereign citizens” as potential “domestic terrorists” who might be recognized by “References to the Bible, The Constitution of the United States, U.S. Supreme Court decisions, or treaties with foreign governments.”