OBAMAS COMPLAIN THEY ARE TREATED LIKE “HELP” DESPITE LAVISH LIFESTYLE 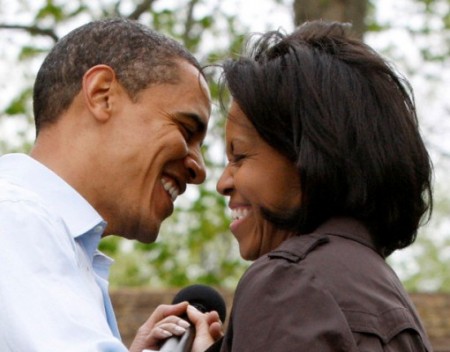 (Dec. 17, 2014) — The man known as Barack Hussein Obama and his wife Michelle have completed an interview with People Magazine, as reported at ABC’s “Good Morning America,” in which they say that even during their time in the White House, Michelle has been treated like hired “help” in an effort to show that blacks continue to be viewed through the lens of racial prejudice in the United States.

On November 6, 2008, Obama was lauded as having been elected to be the nation’s first black president.  At the time, he rejoiced that “America is a place where all things are possible…” and reveled in “the power of our democracy.”

The media celebrated the “historical” event in which an African-American was elected president.  “It’s been a long time coming,” Obama said in his victory speech.  “Change is coming to America.”

Obama has always stressed what he believes is the importance of “transparency” in government as well as everyone “playing by the same rules.”  In October 2008, he told Samuel Wurzelbacher, aka Joe the Plumber, that “spreading the wealth around” would “make it better for everybody.”  Wurzelbacher was then demonized by the media for having asked Obama the question about his tax policies.

Since ascending to the White House, Obama has taken control of one-sixth of the U.S. economy in the form of “Obamacare,” his “signature” health care bill passed through deception, no bipartisanship, and with many congressmen having neglected to read the provisions of the bill.  “If you like your plan, you can keep your plan,” Obama had told the public untruthfully, a statement which remains on the White House website today.

Despite promises to lower health insurance premiums, many Americans have reported sharp increases, and higher out-of-pocket expenses can be expected for many next year.  The official name of the “Obamacare” bill is the “Patient Protection and Affordable Care Act.”

Obama’s putative attorney general, Eric Holder, has called blacks “my people.”  During Obama’s tenure in the White House, blacks committing high-profile crimes are elevated to martyrdom while nothing is said about the deaths and injuries of countless white Americans, including a five-year-old girl, at the hands of blacks through the “Knockout game” and other violent crimes.

Nevertheless, the Obamas told People that they believe there is “a systemic problem” with racism in America, without using the word, towards blacks.

Earlier this year, Obama said that there was “not a smidgeon of corruption” within the IRS despite the admission that certain tax-exempt applicants had been discriminated against for political reasons beginning in at least 2010.  Recent revelations that the IRS shared confidential taxpayer information with the White House also belie Obama’s claim.

Rather than exhibiting racial bias, the media has orchestrated a cover-up of what could be the most significant crime in U.S. political history:  that the man who calls himself president and commander-in-chief has presented fraudulent documentation to an unsuspecting public.

The Founders indicated in the First Amendment that “freedom of the press” was vital to keeping its citizens informed of the activity of its government, but the media has refused to report on the findings of forgery and fraud by a law enforcement investigation.  Rather, it has vilified the messengers, Maricopa County Sheriff Joe Arpaio and Maricopa County Cold Case Posse lead investigator Mike Zullo, who declared Obama’s long-form birth certificate and Selective Service registration form “computer-generated forgeries” nearly three years ago.

Beginning in 2007, the media refused to research Obama’s background, and his governmental records, if they exist, were never released.  His exotic life story was never explained, nor the issue of his constitutional eligibility or lack thereof allowed to be discussed.

The 2008 Obama campaign claimed that it “controlled the media” and its message, and several White House staffers have spouses working at the major media networks.

Obama claimed he was born in Hawaii after stating in his official biography from 1991 to 2007 that he was “born in Kenya and raised in Indonesia and Hawaii.”  In 2004, various African media outlets described Obama as “Kenyan-born” as he sought the second U.S. Senate seat from the state of Illinois.

He claims a foreign-citizen father, which historically precludes him from being a “natural born Citizen,” as is required of the president by Article II, Section 1, clause 5 of the U.S. Constitution.

In April 2011, following considerable pressure from Donald Trump, the White House released what it said was Obama’s long-form birth certificate from the Hawaii Department of Health (HDOH).  Several months before, the newly-sworn-in governor, Neil Abercrombie, had told the press that he had been unable to locate a birth certificate within the Health Department’s archives.

A 2008 Hawaii elections supervisor swore out an affidavit stating that he had been told by his supervisors during the election cycle that no long-form birth certificate existed at the Health Department bearing Obama’s name and that it was common knowledge.

In a recent editorial at The Washington Times, commentator and column editor Monica Crowley related how a seasoned newsroom producer at a major media company approached her while walking through a section of New York City in 2012 and confessed that “the left-wing bias was always left unspoken” in various newsrooms where she had worked over three decades.  She added that the mandate of each day has been “how to protect Barack Obama.”

Emails exchanged between Department of Justice staffers in 2010 show that putative Attorney General Eric Holder’s aides expected to “control” any media unfriendly to the regime, including former CBS investigative reporter Sharyl Attkisson, who a top Holder aide described as “out-of-control” after she began reporting on the Fast & Furious gunrunning operation which killed at least one American.

An alternative radio show host told Arpaio during a recent interview that a mainstream media executive admitted to him that he is aware that Obama’s bona fides are fraudulent but that reporting it could result in everything Obama has done while in office being nullified.

The Obamas have spent a reported $20 million on their Hawaii vacations since taking office.  If Obama serves out his term, he will have three more Christmas and summer vacations, respectively, charged to taxpayers during a time when millions of Americans still cannot find employment after six years of “hope and change.”

In his recent interview with People, Barack Obama reportedly stated that “There’s no black male my age, who’s a professional, who hasn’t come out of a restaurant and is waiting for their car and somebody didn’t hand them their car keys,” indicating that black men are mistakenly identified as valets.

In 2008, anyone questioning Obama’s background, eligibility or life story was labeled a racist.  Today, anyone critical of his policies may still be called “racist.”  However, many believe that Obama is a racist, including fellow blacks.  While attending Harvard Law School, Michelle Robinson Obama joined the Black Law Students Association and wrote in an essay that minority and female law school professors faced “racist and sexist stereotypes” from their white male counterparts and students.

In 2011 alone, Michelle Obama reportedly spent $10 million in taxpayer money on vacations which included vodka, massages, and separate jets for herself and her husband to Martha’s Vineyard.  A book written about the Obamas’ life in the White House between 2009 and 2012 cites Barack Obama as having described his wife’s new spending habits as “fearsomely expensive.”

In addition to the Obamas’ vacation at the Vineyard in 2011, a shopping trip Michelle made to a suburban Washington, DC Target store was publicized, purportedly to show that Mrs. Obama shares the shopping habits of average Americans.  Now, however, Michelle is complaining about the way she was allegedly treated while patronizing the store.  Although at the time, ABC News reported that her arrival at Target was preceded by a sweep by Secret Service agents, that Michelle wore “a baseball cap and sunglasses” and that “The only person to recognize the First Lady was the cashier who rang up her purchases,” Michelle told People Magazine that “The only person who came up to me in the store was a woman who asked me to help her take something off a shelf.”

Whether or not another shopper or employee could have approached Mrs. Obama while she was presumably surrounded by Secret Service agents is an open question.

Last year, as the Obamas left on their annual August vacation, The Huffington Post reported that “Michelle Obama’s Vacation Style Is Pretty Similar To Her Everyday Look.”

Despite trips to Spain, Africa, China, and Aspen, CO totaling in the millions, billed to taxpayers, her husband’s usurpation of the White House by deception by touting a fraudulent birth certificate and Selective Service registration form as his own, and continuous protection by the American media, Michelle Obama stated that inferior treatment of black people is “the regular course of life” in the United States.

Obama has presided over “scandals” within the IRS, DOJ, EPA, Secret Service, General Services Administration (GSA), and Selective Service System, the latter in regard to his fraudulent Selective Service registration form.  Despite calls for his impeachment and complaints of executive overreach, Congress has failed to take action while the Obamas continue to plan their upcoming Christmas vacation.

And the birth certificate forgery remains on the White House website.

After Spending Millions on Vacations, Usurping the White House, Lying to Voters, and Posting Forgeries… added on Wednesday, December 17, 2014

7 Responses to "After Spending Millions on Vacations, Usurping the White House, Lying to Voters, and Posting Forgeries…"