A Cherub’s Glee, ‘Long Side the Christmas Tree 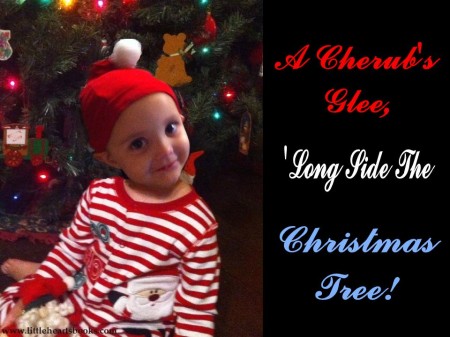 We have written many songs and poems throughout our lifetime, so we elected to write something far removed from what is being reported on the various news channels and what we have been writing about for the last 10 years.

Instead, as our contribution to Christmas, we wrote a poem and super-imposed it by voice over the popular Christmas song, “Oh Holy Night.”  Then we added some pictures of precious children around the Christmas tree.  The poem is dedicated to the little innocent ones that we call cherubs.  It’s all about the real foundation of America in particular and civilization in general.  That foundation is the nuclear family of one man, one woman and our precious children, especially at Christmastime.  That is where America’s real power and strength lie, if those Americans only knew it and had the courage and were united enough to use that power, en masse.

As our final article for 2014, we have uploaded our Christmas poem, music and pictures as a video to Youtube, available at the following link.

entitled: “A Cherub’s Glee, ‘Long Side the Christmas Tree“

We hope you enjoy the video and consider it worth sharing with others during this Christmas season.

As many of you know, for almost 10 years now, we have authored a weekly column about America from the perspective of a conservative.   If there are one or more of our articles of interest to you, they can be viewed on our website by title at these two links: “The Parallax Prophecies”    “In Defense of Rural America.”  Or, you can find them in the archive section of this publication.

Our focus has been, for those 10 years, on what is wrong with America as it relates to her principles, ideals and the foundation of individual liberty.  We have covered most of the pressing issues facing America and Americans today.

Although we have tried to include a little inspiration in some of our articles, it is hard to be inspirational when so much of who we were has evolved into who we wish we weren’t.  We have even inserted some solutions to those issues in our articles but there haven’t been many takers, probably due to the fact that America is so fractured, divided and just generally apathetic.  As a testament to this, out of the thousands who read our column, only four (4) people signed our “Declaration of Resistance” petition and mailed it to us.  We sincerely thank those four for their uncommon courage.

Most people just don’t feel that it is all that bad anyway and it doesn’t require their attention.  Life is good, for the most part.  Millions of people have a home, a couple of cars, some kids, a good job and a little extra money to spend for vacations and wish lists.  Government isn’t bothering them (as far as they know), so why upset the apple cart and attract government’s attention by getting involved in resisting government?   The prevailing mindset is, let the other guy take the “hits,” if it’s so important.

If urban Americans were under the same kind of government assault as are rural landowners, there would be a lot more people interested in what government is doing to them and they would start challenging government and holding it accountable.  Urban Americans ARE under assault by government; they just don’t know it, or won’t acknowledge it.

Perhaps this is why we get so few responses to our articles these days.  Or maybe it’s the uncertainty of the political and financial scene, or the severe weather and an early winter, or the distraction of the holiday season from Thanksgiving to Christmas and New Year’s.  Perhaps we have just gone stale and lost our ability to communicate our message.   It would seem that the serious issues facing America just aren’t that important to the people right now, no matter what time of year it is.  The people say, “Let the government do whatever it is going to do and hopefully it won’t affect us.  We just don’t want to get involved.”

Whatever the reasons for the apparent lack of interest in our efforts, we’d like to convey our best wishes to all in our reading audience.  May you find peace and happiness as we celebrate America’s two religious holidays that emanate from our Judeo-Christian heritage.  May next year be an uplifting one where some of our national, local, financial, economic and cultural problems are addressed head-on and solved by honorable men and women working for America, not a political party.  We can only hope that men and women of common sense will resurface and prevail in the end.  For far too long, America has had a belly full of the arrogant, educated idiots in this country, usually coming from the left.  Need we mention Jonathan Gruber, the sniveling little Harvard professor who took $4,000,000 from the taxpayers to consult on Obamacare and then had the gall to call those same taxpayers “stupid?”

So until next year, then, when we shall start out with a series of four articles dedicated to exposing corruption in all of our institutions.  Sadly, government in America – local, state, or federal, whether it exists in the executive, legislative, or judicial branches – has become institutionally corrupt by virtue of decades of no oversight and citizen indifference and apathy.  This corruption has become systemic at every level of government where graft, payoffs, bribes, nepotism, cronyism and unconstitutional lawmaking are the rule rather than the exception.   The last of these four articles will launch a major effort to rein in that corruption, starting in the rural counties of America.  With this effort it will be our goal to strike fear into every politician, judge and government bureaucrat in America.  Because, you see, we are not afraid of taking the “hits” ….. for America!  America might just survive national suicide if there were a lot more people willing to take the “hits.”

A Cherub’s Glee, ‘Long Side the Christmas Tree added on Wednesday, December 17, 2014