A Christmas Gift to You from Cody Robert Judy U.S. President 2016

“FIGHTING FOR YOUR INTEREST” 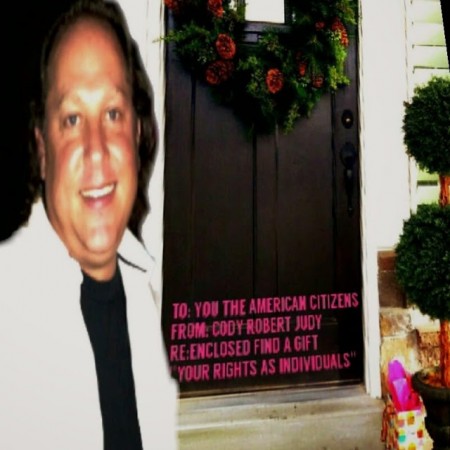 (Dec. 8, 2014) — There are about four crises in life that are constituted as major harbingers. There doesn’t seem to be immunity, pardon, or clemency from the acronym D.I.E.D –Death-Incapacitation-Employment loss and Divorce.

Death of a pet, parent, spouse or even a child, can overload anyone’s heart with ostensibly uncontrollable pain, grief, or heartache. Incapacitation by injury, accident, disease or sickness can have the effect of a sledge hammer to the conscience rendering one dizzy, off balance, and stupefied. Suffering a job loss of employment can shift a person’s outlook on the world from a happy go-lucky comedy to the most frightening horror show you’ve ever seen. Divorce or a Break Up with a significant spouse or partner can reverse a normal happy person into a state of horrible catatonic shock.

Sometimes these trials make their appearance on our stages in life all by themselves which allows a focused attention on them singularly. Like fighting a dragon, if you can just beat this one time, you’ll be in the clear. You focus on the beast employing the weapons in your quiver for such. Counseling, religion, prayer, good diet, like an executrices’ reading a will, you deploy these in a stabilization mission in your best effort from being rocked in order to cope and keep going in ways you hadn’t imagined.

These tests, conflicts, or battles, happen every day to normal good intelligent people provoking the heart and mind to the unconscionable realization that self-destruction or termination actually comes into the ballpark as not such a bad offer to escape the trail of tears.

Occasionally the one monster divides causing others to raise their ugly heads, or just as easily is joined on the stage by another dragon in your life that you have to face at the same time. Those suffering a death or divorce often can’t bring themselves out of bed to face the demands of their employment; trip and fall losing their job. Like dominoes an injury or illness can compound in a loss of strength in the ability to do a job.

If you have two or more of these going on in your life you can pretty well assess that your life is in a state of psychological shock and quite often you can find your resources, reserves, and resolutions come up short. You feel these dragons in their mean business are about to drag you off as prey to certain death.

I know people who are suffering these things today. They are not far away stories in a land of make-believe, but are on base with their reality. In fact just yesterday, I learned a long time friendly and loyal customer of mine had passed away from his grief- stricken and broken-hearted daughter. Just a few hours after that it was reported to me a friend in her mid-forties who had found the love of her life and married him after fully recovering from a life threatening brain aneurism that hit her with a stroke three years ago, had received the news that her new husband of two years had been diagnosed with several brain tumors that could not possibly be removed and a three month death sentence was given to him.

Looking at these battles in our lives as dragons to slay rather than events is one of the reasons I was attracted to majoring in the collegiate study of psychology. I grew tired of a diagnosis with the solution of a pill meant to put you in some warped speed time capsule with the promise that when you woke up everything would be ok as if it was a solution to reality itself.

Don’t get me wrong here, I know at times our bodies stirred by events can concoct a slew of chemical cocktails “shaken not stirred” as James Bond put it and to add a dash of my mother’s self-subscribed wisdom to that, “There are many prisons people suffer as life sentences”. Prisons can be for a select group of felons, but even more truthful, sometime in everyone’s life circumstances in the events of our lives hold us and squeeze while the hot billows of fire are poured out upon us and all we can smell is the paltry scent of sulfur as we realize a certain hell unleashed on earth has hit us.