“ONLY ONE ADDRESSES THEM ALL” 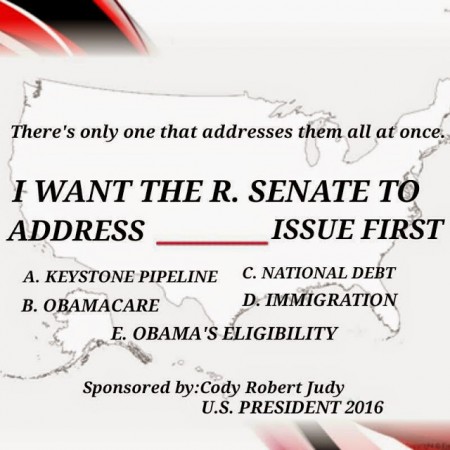 (Dec. 3, 2014) — “What would you like the new Republican-controlled Senate to address first?” asks the multiple-choice questionnaire making the rounds on the Internet, with five choices offered with the pertinent tantalizing Red alert that challenges everyone at the beginning, “Only one addresses them all.”

Indeed, the choices are, for conservatives, like walking in to the candy store and having to decide on one when all the choices look so good. Wanting to of course have all, one cannot help but contemplate which of all of these choices would actually result in a windfall of having it all?

We’ve all been there, wondering how we could possible choose between the peanut butter cups, the chocolate-covered almonds, the caramel popcorn, or one’s favorite ice cream with whatever was the fancy on top, or the chocolate-covered pretzels offering the perfect twist on sweet and salty which one’s mouth could possibly imagine. With this challenge comes the delicious promise that if we choose the right one, we could have the other four!

A. The first choice, TransCanada’s proposed Keystone XL Pipeline, would transport oil sands crude from Canada and shale oil produced in North Dakota and Montana to a market hub in Nebraska for further delivery to Gulf Coast refineries. The pipeline would consist of 875 miles of 36-inch pipe with the capacity to transport 830,000 barrels per day. Because it would cross the Canadian-U.S. border, construction of Keystone XL requires a Presidential Permit from the State Department that Obama has promised to block.

B. Obamacare – The monstrosity overwhelming one-fifth of the entire U.S. economy was jammed down America’s throat with Obama’s promises of “You could keep your doctor” and “It wasn’t a tax” and absolutely no Republican input. At the time, Democrats were in control of the House, the Senate, and the Executive Branch in Obama’s Signature law.  Republicans felt America had totally abandoned any sense of reality even though the 2010 election returned control of funding to Republicans and Mitt Romney was beaten in 2012 by an edge of 2% amidst smoky elections at best, and all would be fixed with money you just threw at Obamacare from tax collections. With a stroke of heaven’s luck, the website roll-out was about as disastrous as the transparency that was promised, and anyone who had money in the game was given a pass until the lower portion of America’s middle class picked up the ball and started rolling with it or paying for it through their federal income tax withholdings if necessary by the IRS and confiscation of property by penalty delayed to start this next year.

C. The National Debt spoken of by the Media in the hushed tones of blinds closing just bounced 40 Billion the last few days to a mile marker of over 18 Trillion and now by its demand has produced a stamp of debt upon future generations so debilitating that one might look at their grandkids as slaves likened to the Egyptians in the new Exodus with an evil torrential juvenile master as God. Indeed, the juvenile behavior has come from the dictatorial Government that cast aside the Constitution in favor of child-collateral written or placed upon the heads and hands of all the children in America in their lifelong labors contriving what has candidly been called “generational theft.” The debt was at about $10.5 billion in 2008 and the stock market was at 7,500 after the crash. A near conundrum perplexes the brain at the boast that the stock market is now at 17,000 but the debt has nearly doubled.

D. Immigration – Obama-Reid-and Pelosi Company halted any executive action prior to the election of 2014 as a grace period for the Democratic Party to gain favor with the American People fearing that if action happened with Immigration before the election a revolt would occur with the voters and they would lose the U.S. Senate. That body of the Government designated in Article I, Section 3 of the Constitution stating, “..the sole power to try all Impeachments ..when the President of the United States is tried, the Chief Justice shall preside; and no Person shall be convicted without concurrence of two thirds of the Members present. Judgment in Cases of Impeachment shall not extend further than to removal from Office, and [disqualification] to hold and enjoy any office with honor, Trust or Profit under the United States: but the party convicted shall nevertheless be liable and subject to indictment, Trial, Judgment and Punishment, according to law…” After the 2014 election, Obama forged ahead with his immigration plans and using ‘discretionary prosecution power’ issued an executive order putting a stop to the deportation of five to eleven million illegal aliens, defying the election results as any kind of will of the people.

E. Obama’s Eligibility – The qualifications for the President are clearly not those of the U.S. Reps and U.S. Senators with the requirement of “Citizen.” In fact, the “Citizen” requirement does exist for the Office of the President if you born at the time of the signing of the Constitution, but afterwards devolved upon only a “natural born Citizen,” understood without a doubt to be those born in the U.S. to Citizen parents with no alien-ship or foreign citizenship for two generations. This served as a protective barrier or wall of defense in the national defense security of our nation, as the person in the Office of the President, unlike Representatives and Senators, has also the post of Commander-in-Chief of the whole of the armies. Such a power is clearly much greater than those powers of the Representatives and Senators who act as a body with many members. The naïve stand that “Citizen” is “good enough” for the Office of the President not only clears the path to a single generation from a double generation protection, but acts as a forbidden construction upon the U.S. Constitution.

Obama’s long-form birth certificate he actually handed out three years after his election declared a foreign citizenship in his father; and in honoring his father, that must be considered or certain disrespect is heralded to his Kenyan/British Heritage and Obama’s Indonesian foreign citizenship formally adopted by his stepfather to attend school in Indonesia.

What Would You Like The Senate to Address First? added on Wednesday, December 3, 2014