“SOMEONE HAS TO DRAIN THE JUDICIAL CESSPOOL” 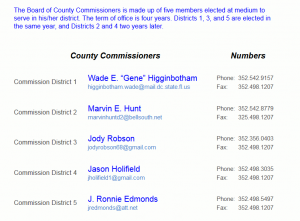 (Oct. 17, 2014) — This is a first-party update of the Dixie County, FL County Commissioners Meeting (cited below) that was attended by Wendell Beattie and me, among others.

Wendell and I drove from Crestview, FL to Cross City, FL on 10-16-2014 and joined 50-100 other supporters fighting for Terry Trussell’s release and vindication of a charge for doing his duty as jury foreman and later convening a “common law grand jury” that voted presentments against government officials.

The Dixie County Commission Chairman started the meeting on a positive note.  Since Terry’s issue was not on the official agenda, it ordinarily would have had to be presented during the “public discussion period” at the end of the commission’s official agenda.  However, the Chairman, noting the substantial attendance, elected to move Terry’s issue to the top of the meeting.  He asked for those who wanted to speak to raise their hands, and the documentation of the travesty Terry experienced began and was shared with the Commissioners by Mr. Rodger Dowdell, Hagan Smith, as well as several other men and women who spoke in Terry’s defense, many who had witnessed Terry’s arraignment.

Rodger and Hagan laid out the law in a constitutional sense as well as the Florida constitutional application regarding common law and general miscarriage of justice in Terry’s case.  It was compelling evidence that 1. Florida is a “common law” State; 2. The U.S. Constitution clearly supports common law; 3. the Florida Constitution clearly describes the authority of a county commission as key in common law grand jury application; and generally related the absolutely bizarre nature of Judge Hankinson, State Attorney Siegmeister, and others’ behavior involving Terry’s arrest at the arraignment.

It was apparent to me that by the County Commission’s attention, they were grasping the serious nature of what was happening to a citizen in the United States, Terry Trussell, who is being punished for uncovering illegal activity and having the guts to stand for justice rather than contribute to more corruption.  (You can read the sequence of events of Terry’s judicial encounter below.)

There was one request from the floor for the Commission Chair to read US Constitution V Amendment.  The Chair declined but another Commissioner volunteered to read to the audience.  He read, “No person shall be held to answer for a capital, or otherwise infamous crime, unless on a presentment or indictment of a Grand Jury, …” and of course there has never been a Grand Jury hearing any issue regarding Terry Trussell.  Bottom line, Judge Hankinson ordered Terry arrested and is holding him without bond, a V Amendment injustice.

I also spoke with Terry’s wife Marie as well as their daughter.  Both are doing well, fully committed to the path needed to exonerate Terry and prove to America that “we the people” are the power given through the US constitution and have rights from God that no judge nor any other human can take from us.  Marie indicated Terry was well. The medical episode he had after initial incarceration and landed him in the hospital resulted from him not having his medication for 2-3 days.  The obvious discomfort of a cell as well as absence from family is troubling, but Terry’s attitude is “he is right, they are wrong” and that means a fight for justice.

The Chair of the commission stated there could be no vote on the request for Court Room space at the present meeting, as the issue related to Terry Trussell was not a formal agenda item.  It was agreed that the item would be accepted as a formal agenda point for the next County Commission meeting which I believe is November 7, 2014. (I was not given any information related to Terry’s release from jail.)

The general sense of Wendell, myself, and others as to the reception by the Commissioners was positive, encouraging, and uplifting,  particularly to Terry’s wife and daughter in spite of Terry’s continued absence from the family.

There is strength in prayer, which is our number one resource on Terry’s and the family’s behalf. Please be praying, and if you can, be prepared to visit Cross City, FL on November 7, 2014 in support of Terry, his family, and show strength to the County Commission that America is standing with Terry and his family.

Hankinson, Siegmeister, and others in the government establishment are wrong; Terry Trussell is right.  Someone has to drain the judicial cesspool…Terry didn’t ask to be thrown in it, but he will fight like hell to drain it……..