COMMENTARY IN SUPPORT OF SAPPA 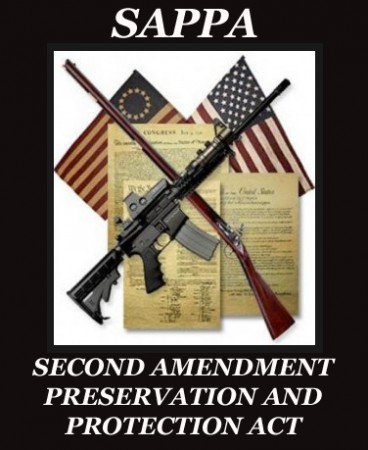 (Oct. 14, 2014) — The growth of tyranny in the massive bureaucracy of the Federal government has awakened too few and seems to have even fewer concerned.  But some are. They are not only willing to do something about it, they are organized and on the move.

The attack upon the the rights and freedoms of the people has been like a melanoma spreading through the life’s blood of this country as its pervasive reach has metastasized from the Halls Of Congress down to the legislative assemblies in several states.

Many of the most infected states, New Jersey being one which has legislated the Second Amendment onto life support, have given a pass to their governors and their legislators, a form of amnesty if you will, as the relentless abridgment of the United States Constitution continues to weaken and tatter its very existence. This amnesty comes only from one place. The people.  As legislative lawbreakers pass illegal laws they are awarded tacit pardons by the very people being infected. They sit quiet and sedated like the sheep people waiting to become dinner in H.G. Wells’ The Time Machine.

Any businessman or contractor will tell you, when they sign a contract for a project or some other deal or arrangement, all parties are required by not only the law, but by ethics to abide by every aspect of that agreement.  Once any section or requirement of that contract is ignored or abridged, no signer of that agreement can be held to any of the remaining provisions.

The contract that the Federal government and state governments have forged with the people and have agreed to honor and abide is the most famous and most esteemed document ever authored, the United States Constitution, our Constitution.

We have not reviewed all 50 states, but here in New Jersey, we have done so.  New Jersey’s State Constitution is law, and its law requires that the United States Constitution not be infringed.  So, my patriot friends, why are our legislators, without impediment or indictment, time after time, allowed to write and pass laws that run contrary to both of those constitutions? Every illegal law they pass is a double violation.  As these people place themselves and their ideology above the requirements of those documents they are placing themselves in an organized cadre of persons infringing on the civil rights of the citizens.

Not only are the lawmakers guilty of both federal and state violations, all those groups which are working on a daily basis to deprive the people of their rights, as defined in the Bill of Rights, are too, guilty of civil rights violations, both state and federal. These groups constitute an organized abridgment of the documents that are the very foundation of what has made America great.

As the multi-millionaire liberals use their fortune and fame, working to remove your right to self protection, they provide for themselves the best armed security money can buy.  Hiring gun toting body guards is not a crime, but engaging in organized treasonous acts against the United States Constitution is.

Our Founding Fathers, some of the most unselfish and intelligent people God has ever created, knew and understood that times would change, innovations and technology would alter life as they knew it into something far beyond their ability to perceive.  For that reason they did not hold every aspect of the Constitution to be forever enforced.  And so, they gave us, the people, by 2/3 of the member states, the right, the ability, to make changes in the form of amendments.

That of course would be the legal way to disarm the American people.  But creating fear, promoting hate and misrepresenting facts and history in an effort to breed an environment where illegal laws are allowed to be written, passed and signed, constitutes lawlessness which can not be allowed to prevail. From this point forward, being elected to the Assembly or the State Senate will no longer give cover to those who would violate our Constitution.  Be it so forewarned.

If those groups and socialist millionaires spend their time and money working to build support for an amendment which would remove the right of the people to defend themselves by effective means that would be a legal campaign. For certain it would be contested by many.  But it would be legal.

However, lobbying politicians, with money or political support as ammunition, in an effort to have those politicians infringe on the rights of the people, in violation of the oaths they all have taken and the constraints of both state and federal constitutions, represents egregious and organized civil rights violations.

In summary, working to change the Constitution is legal.
Working to abridge it, is a crime.

Note from TPATH and TeamNJ: If you have had your right of self protection denied or infringed and you believe, as we do, that it is time to stop not just the illegal laws but to hold the lawless lawmakers to account, click on this link, read about what our group of patriots is working to accomplish, then sign up and help out.

Read all our documents on line here:
http://www.tpath.org/2nd_Amendment_Act.php

Download all the documents now in PDF format here:
http://www.tpath.org/SAPPA_Downloads.php

Then if you want to help get this information to the NJ Legislature sign up here:
http://www.tpath.org/2nd_Amendment_Act.php#sappa_signup_form

Or if you have been denied the right to carry a firearm for the unlawful reason of insufficient need, sign up here and help with the coming class action suit:
http://www.tpath.org/2nd_Amendment_Act.php#RightsDeniedSignUp

One Response to "Lawbreaking Lawmakers and Their Leftist Cohorts pb"