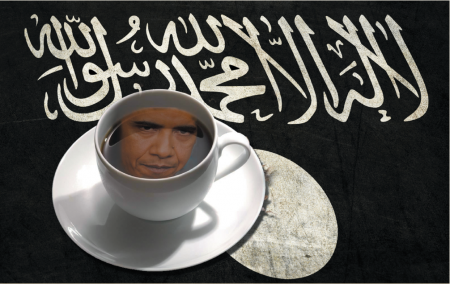 (Oct. 1, 2014) — On Monday, an advertorial written by radio host and commentator Erik Rush was published in The Washington Times under the subtitle “America… It’s Time to Wake Up and Smell the Jihadi.”

Rush wrote the text and created the graphic, which contains the flag of ISIS, or the Islamic State, which has been rampaging across Iraq and Syria and plans to create an Islamic caliphate in the Middle East and perhaps around the world.

On Tuesday evening, The Post & Email interviewed Rush about his motivation and intent in creating the advertorial.

“Someone who is one of my patriotic connections and likes to contribute to the cause had said, ‘I’d really like to get something out; let’s put out heads together.’  So I just whipped this up, and he loved it and said, ‘Can we use this?’ and I said, ‘that’s kind-of why I wrote it.’  I came up with the graphic, and we batted it around among two or three other like-minded guys, and they really liked it and went with it,” Rush told us.

Rush created the montage with a combination of public-domain graphics of the ISIS flag, a coffee cup and an image of Obama reflected in the coffee.

“You seem to be making a bold statement with Obama’s face in the coffee cup,” The Post & Email commented, to which Rush said, “I wanted to find something that looked pretty sinister without looking as if he was insane.  He may very well be insane, but I wanted to go with something a bit more sinister and calculating.  I think that particular shot was a good one for that purpose.  I think the idea was probably inspired, because it just came to me while we were brainstorming.  There were a few different slogan-type things which arose, and that one just came to me.  I waited until I had the graphic done to help sell it, and they just really loved it.”

Originally, Rush did not envision that the advertorial would be credited to him, but those placing the ad suggested that his biography be included to promote his “Full-Contact” radio show, which airs Monday through Friday from 11:00 a.m. ET to 1:00 p.m. ET.

“Do you think Obama is connected to ISIS directly?” we asked.

“I absolutely think that ISIS is an Obama creation, 100%.”

“What makes you say that?” we asked.

“First of all, he was clandestinely supporting the so-called ‘moderate’ Syrian rebels, and more overtly after he changed the law with his pen whereby it was illegal to financially support terrorists, but if you don’t call them terrorists, then you can do what you want.  Then there was a report out of Jordanian intelligence which has been reported in various media outlets that the CIA was training some of the top-level ISIS guys in Jordan.  I believe that was also reported by the British media.  When you look at his fingerprints in the Arab Spring and everything that has happened over there…Benghazi figures into it to a certain degree, although the information is a little bit harder to sift through.  My belief is that ISIS is an Obama creation. Then, of course, you have The New York Times article that we refer to in the ad where they’re essentially saying that the political word on the street in Iraq is that it’s common knowledge that the CIA created ISIS.”

Rush believes that “the overall idea” for the metamorphosis of ISIS is “the toppling of secularized governments and the establishment of the caliphate.”

Regarding his radio show, Rush said that his audience is growing, but he is seeking advertisers and citizen supporters to keep it on the air.  “Since we’re so frank and out-front, I am not as concerned with becoming completely dependent on big-name advertisers who will be able to dictate what I say.  That said, we would love to have advertisers.  Right now we’re running PSAs [public service announcements] and things like that which don’t really generate income.  We’d like to get to the point where we’re paying the bills; that’s all we really need to do there.  My background is in business, so I’d like to run it like a business as opposed to just taking donations, but I’m certainly not too proud to do that.”

Rush recently added a “Donate” button to his website.  “People have certain misconceptions about how all of this works,” he explained. “If they see a really spiffy-looking website, they probably assume you’re making money hand-over-fist.  They see me on Fox News, and they assume the same thing, which is anything but the truth.”

“Is it correct to say that it’s going to take lots of people supporting your show to keep it on the air?” we asked, to which Rush responded, “That’s about the size of it.  Of course, my intention, when we can afford to do so, is to put some of that income into promoting the show itself, which will garner more listeners and more advertisers signing on.”

“You’re willing to discuss the eligibility/identity issue with regard to Obama as well as coming out and using the word ‘treason,'” we observed, to which Rush said, “That’s essentially what it is.  I think that if we had people in government, at the Justice Department or in Congress, who were doing their job, an independent prosecutor could get a treason conviction on this guy without breaking a sweat.”

“What do you think will happen in the midterm elections?”

“Barring widespread voter fraud, which is anyone’s guess as to whether or not that will come into play or to what degree, I think the Republicans will take the Senate and gain more seats in the House.  The question becomes a) will the conservatives in the House and Senate be willing to take that as a mandate and make some very hard decisions and definitive political moves, and b) what will that do to the short-term objectives of the administration, because the president has essentially been ruling by fiat anyway.  Will he take this as an opportunity to say, ‘This has been a right-wing Tea Party revolutionary cabal; I’m going to take this as an insurgency and use it as a justification to become even more audacious.'”

Rush said that should the Republicans win the Senate, given what he views as tyranny on Obama’s part to date, the question will be “Will we see more?”