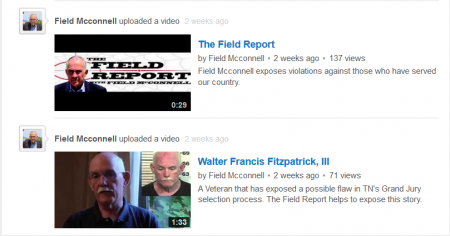 (Sep. 17, 2014) — Professional filmmaker William (Wilky) Fain has informed The Post & Email that a video depicting the efforts of CDR Walter Francis Fitzpatrick, III (Ret.) to expose corruption within the Tennessee judiciary is nearing the stage when it will be presented to an agent for consideration as the basis for a documentary.

Over the last two weeks, Fain released several clips from the video on a YouTube channel featuring Fitzpatrick and his attorney, Van Irion, who are battling a corrupt judicial system in southeastern Tennessee.

Fitzpatrick is currently imprisoned at the Bledsoe County Correctional Center (BCCX) in Pikeville, TN after having been convicted of “aggravated perjury” and “extortion” in June as a result of his repeated attempts to inform the McMinn County, TN grand jury of evidence of criminal behavior on the part of public officials including judges, prosecutors and court personnel.

Five years ago, Fitzpatrick inadvertently discovered that grand jury foremen in Tennessee are hand-selected by criminal court judges at whose pleasure they serve, sometimes for decades.  The grand jury, which is expected to be an unbiased, independent body based on its Fifth Amendment function to examine evidence of crime before a charge can be leveled, is thereby strongly influenced by the presiding judge and the foreman in what Fitzpatrick has termed “the dictatorship of the judiciary.”

As a result of multiple Open Records requests made to various courthouses throughout the state over several years, Fitzpatrick obtained documentary evidence that judges have hand-selected foremen since at least 1980.  The Tennessee Administrative Office of the Courts (TAOC) has denied that anything is amiss with the practice of judges’ personal selection of the foreman from outside of the jury pool, which by law must be made by “automated means.”

Likewise, last September, the Tennessee attorney general’s office stated in a court brief that the grand jury foreman is, in essence, not a juror, as he is selected by the criminal court judge and performs “ministerial and administrative” duties.  However, the foreman votes with the other members of the grand jury on whether or not to indict an individual on criminal charges.

Fitzpatrick and a growing number of others in various states around the country have discovered that grand juries and trial juries have been turned against the citizens they were designed to serve.  Having become tools of the government, grand juries often issue indictments upon demand targeting individuals against whom law enforcers, prosecutors or judges bear a personal vendetta.

The “grand jury” which issued Fitzpatrick’s indictments had been provided with negative information about him by the previous foreman, Jeffrey Cunningham, who was hand-selected by former criminal court Judge Amy Reedy in 2011.  Cunningham was one of those Fitzpatrick identified in his petitions as having committed a crime against the citizens of the county.

In the Tennessee Rules of Criminal Procedure, grand jurors are charged with investigating reports of crime in the community, including those which may have been committed by public officials.

While in the Monroe County, TN jail four years ago, Fitzpatrick found that a “prisoners-for-profit” enterprise confiscates money and personal property for the county government while jailing an inordinate number of the community’s citizens from tainted grand jury indictments.

Two years ago, allegations of a prosecutor’s influence on the McMinn County grand jury not to indict a sheriff’s candidate were reported to The Chattanooga Times Free Press but ultimately not investigated by a probe launched by the Tennessee attorney general, Comptroller of the Treasury, and Tennessee Bureau of Investigation (TBI) which ultimately declared the main person of interest, former District Attorney General R. Steven Bebb, innocent of criminal wrongdoing.  Citizens of the Tenth Judicial District then approached their legislators, who attempted to remove Bebb from office.

Bebb eventually resigned at the end of May, effective on or about June 6, 2014, although he was not expected to retire until the end of August.

During Fitzpatrick’s sentencing hearing on August 19, Judge Jon Kerry Blackwood was heard to disparage “people talking about their constitutional rights” and to say, “Who cares if the grand jury foreman is chosen illegally?  So what?”

After numerous attempts to obtain an official court recording from the hearing from the TAOC and the McMinn County criminal court, The Post & Email was told by the comptroller’s spokesman that because of the wording of Tennessee’s Public Records Act, record-holders are not obligated to release documents normally available under the Act, citing a federal court decision from 2012 as its foundation.  The Act states that “any citizen of this state” is entitled to ask for and be granted government documents deemed releasable.

No other state has ever refused The Post & Email releasable documents under its public records act based on our place of business or residence.

Tennessee law also allows for court reporters to work “at the pleasure of the judge.”  Numerous defendants in the Tenth Judicial District, which encompasses Monroe and McMinn Counties, have reported “doctored” transcripts and difficulty obtaining them.

On Tuesday evening, Fain also announced that a proposed television series featuring Lt. Col. Field McConnell (USAF-Ret.) titled “The Field Report” has secured a website and is being promoted to major entertainment companies.  The show will feature veterans suffering various forms of hardship from around the country.

McConnell is an aviation expert with a total of 43 years of flying experience in the U.S. Air Force and for commercial airlines.  In March, he traveled to Malaysia at the request of the Malaysian government to contribute his knowledge to the disappearance of Flight 370, which went missing in late February and has not yet been located, although McConnell has theories as to what happened.

McConnell currently hosts the “Abel Danger” radio show on the internet three times a week and is in the process of securing property to open a resort where veterans with PTSD or who are recovering from another major traumatic event can stay.

McConnell was present on August 19 in Athens, TN when Fitzpatrick was sentenced and reported that Blackwood referred to Fitzpatrick as ‘a moral coward'” corroborating the reports of other eyewitnesses.

Last week, McConnell was in Virginia for a reunion of former sailors from the USS America.  On September 13, he spoke to a group of citizens at an area cemetery about the September 11, 2001 attacks on U.S. soil and the sacrifices of U.S. veterans dating back to the Revolutionary War.  McConnell told those gathered that “they came here seeking a future, seeking hope, and seeking peace, and we people above the grass owe it to those above the grass not to marginalize their true contributions and the true history of what it is to serve the United States of America,” which was followed by several moments of silence in respect to those who made the ultimate sacrifice.  Video credit:  KP

Fain told us that the agent currently representing “The Field Report” is submitting the package to Discovery, A&E and the Military Channel.   “After our meeting with the Agent, I have to say I am overly excited about our chances of seeing ‘The Field Report’ on a worldwide network in 2015,” Fain said.