by Dwight Kehoe of TPATH and Nicholas Purpura of TeamNJ 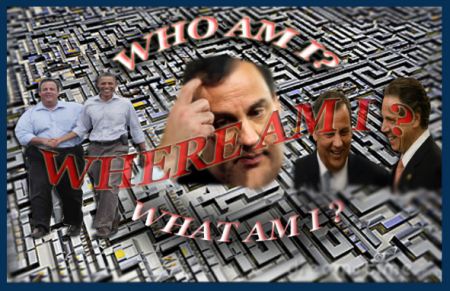 The scope and intent of this open letter is not meant to disparage you unfairly.  But…in respect to all which has occurred during your tenure, what you have done and not done, things you have said and not said, these two questions beg for answers:

Who are you?
Where are you?

As you are aware, patriotic groups supported you and worked to get votes out for you in your first general election to be governor.  They worked for your reelection, albeit not quite as forcefully as the first.  Much in your first 4 years earned that diminished fervor.

It’s understood that being a successful politician requires a certain amount of give and take, compromise and acquiescence.  But those rules of the game should never be allowed to invade, destroy or subvert one’s inner core beliefs or moral values.

The left in this country survives on such deception and could not exist without it being woven though every part of their agenda. On the other hand, the Republican Establishment, in which you, Sir, are well-entrenched, is generally spineless, and while the leadership may have some core values, they find it very difficult to dredge up the courage to espouse or defend them.

Conservatives, true conservatives, which the Tea Party and other patriotic groups are mostly comprised of, refuse to permit the ruination of this country’s culture and her freedoms in the course of obtaining or maintaining political stature.  It’s not a big leap of comprehension to see why both parties, yours and the left’s, feel threatened by and hence, detest those conservative groups.

As we lead up to the biggest part of the question, –Who are you?-, let us reflect upon some of your curious and befuddling statements, actions and of course, non-actions.

Which brings us to the ultimate question, who are you, Mr. Christie?  And where are you?

Governor, the state of New Jersey and you, continue to be in violation of Federal law and the Constitution you have sworn to defend.
Examples:
The most liberal federal panel of justices in this country, the 9th District Court, has unanimously ruled that laws infringing on ownership of firearms, such as those on the books in NJ and other liberal states, are in violation of the Constitution.  Last year the Supreme Court ruled against Chicago’s ban on concealed carry.  Just his summer another Federal Judge ruled that any person, not being a felon who owned a legal firearm is legally permitted to carry it in any state in this country.

Ms. Allen is yet another example of how the outrageous gun laws here in NJ are meant to intimidate honest citizens into giving up their rights while doing nothing to prevent vermin from raping, stealing and killing.

As you know, at least we hope you are aware, Ms. Allen is an African American who has been robbed and threatened in her home and on the street.  She did all the right things that Pennsylvania required to legally secure and own a tool of protection.  She was not aware that when crossing into the Socialist State of New Jersey, her rights no longer existed.  She obeyed the law of PA which required her to inform any policeman she had dealings with by announcing she had her weapon with her and that she was licensed to have it.  Your police state, Governor, then arrested her.

Even if your thinking has been clouded by the thought of national aspirations and you have fooled yourself into believing that the gun laws here in NJ are not unconstitutional and do not violate the 2nd Amendment, our Constitution also provides for the Sovereignty of States and its citizens.  Your laws, we say your laws because you enforce them, create a felon of anyone convicted of even the most minor infraction.  Being a felon denies a citizen the right to vote.  New Jersey, by convicting Ms. Allen, will violate the sovereignty of Pennsylvania and with it Shaneen’s.

Many hundreds of people die as a result of various daily activities ranging from car accidents, swimming, poor doctoring, falls and poisoning.  The percentage of deaths which can be attributed to legally-owned fire arms is so small as to require several decimal places to define. Yet this state concerns itself with legal firearms to the extent that many hard working, otherwise law abiding  people, have been and and continue to be incarcerated for violating even the most minor of those unconstitutional laws and others are terrorized by their elected officials into accepting their fate at the hands of criminals for fear of breaking some idiotic gun law.

So we ask you again, Governor:  Where are you?  Who are you?  Are you a conservative or merely borrowing the term for personal gain?  Will you step in and release Ms. Allen from the maltreatment inflicted upon her by the beautiful Garden State?

Will you work to bring New Jersey law into compliance with Federal rulings and demand our law makers begin to adhere to the constraints of our Constitution?

Free use of this open letter is not only permitted but desired.  If you agree with this letter and also would like these questions answered, please pass this letter on to your State Senator or Assemblyman.