(Sep. 8, 2014) — On September 6, The Post & Email reported to its readership that obtaining documents under Tennessee’s Public Records Act had proved difficult.

The wording of the law, which can be found on the Tennessee Office of the Comptroller’s website, reads, in relevant part:

All state, county and municipal records shall, at all times during business hours, which for public hospitals shall be during the business hours of their administrative offices, be open for personal inspection by any citizen of this state, and those in charge of the records shall not refuse such right of inspection to any citizen, unless otherwise provided by state law.

Sorry for the delay but things have been very busy around the office.  Since you are not a resident of Tennessee, I’m not required to provide you with anything but I will be kind and try to answer your questions.

I have attached a copy of Judge Ross’s oath.

We don’t have surety bonds, as county officials we are bonded but those are not on file in my office.

Regarding  the recording you will need to contact the court reporter, Denise Barnes. You may reach her at PO Box1356, Athens, Tn. 37371-1356

On Monday afternoon, the Tennessee Comptroller of the Treasury’s spokesman, John Dunn, responded to an email we had sent regarding a lack of response by two county criminal courts, writing:

I had our Open Records Counsel Elisha Hodge weigh in on this. Attached you will find a court case which states that it is appropriate to deny an open records request to a non-Tennessee resident. Furthermore, there is no special consideration for a  member of the media. Reporters are treated just like any other person in our statute.

The referenced attachment was of the case Richard Jones v. City of Memphis, in which U.S. District Court Judge S. Thomas Anderson ordered that an out-of-state plaintiff’s requests under the Tennessee Public Records Law were properly denied by the City of Memphis and its employees because the plaintiff did not meet the “Citizens Only Requirement.”

Again referencing a letter we received from Tennessee Attorney Lizabeth Hale in 2012, The Post & Email then responded to Dunn:

Thank you very much, Mr. Dunn.  I was told exactly the opposite by Lizabeth Hale, an attorney working at the TN Department of Safety & Homeland Security, two years ago.  http://tn.gov/sos/pub/tar/announcements/11-52-08.pdf

I do not agree with the opinion, as I believe it is another way that Tennessee government, particularly the local courts, continues to dodge accountability.  I have never had any other state deny an Open Records request based on the fact that I was not a resident.  That actually makes what should be “open records” closed from public scrutiny.

However, I appreciate your efforts, and I will publish this to elucidate my reading audience.

While we did not send Hale’s letter to Dunn, we located it and have made it available here: 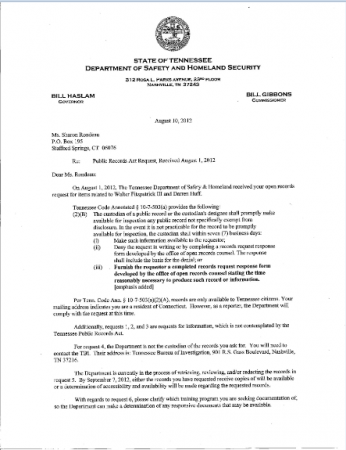 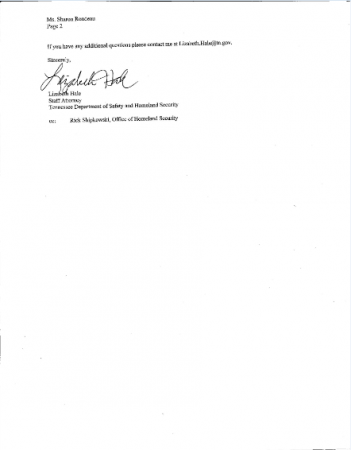 The relevant part of the letter, which is the first paragraph following the list of items requested on page 1, states, “Per Tenn. Code Ann. § 10-7-503(a)(2)(A), records are only available to Tennessee citizens.  Your mailing address indicates you are a resident of Connecticut.  However, as a reporter, the Department will comply with the request at this time.”

When Dunn returned a call to The Post & Email on August 25, knowing that we had an out-of-state area code, he did not invoke the “Citizens Only” provision, nor did Blake Fontenay, spokesman for the Tennessee Secretary of State, either in our telephone conversation of August 25 or in subsequent emails.  In fact, Fontenay stated that he had contacted the Tennessee Administrative Office of the Courts and asked someone to respond to our inquiry for copies of surety bonds covering court clerks.

As this article was being drafted, a response to an Open Records request made to Dixie County, FL arrived in our inbox just hours after it had been submitted.

2 Responses to "Tennessee Comptroller Spokesman Responds to The Post & Email"