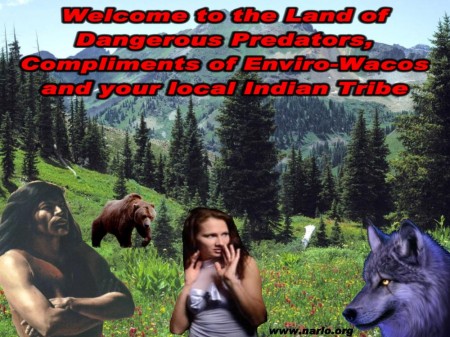 (Sep. 7, 2014) — In the early settlement days of the Pacific Northwest, the new inhabitants to a wild land encountered dangerous predators that were killing their livestock, domestic animals and sometimes people.  Yes, wolves, bears and cougars were indigenous to the area.  As the human population grew, deadly run-ins with these animals occurred more frequently.  It was said that in the pioneer days of Seattle, the people could not walk the streets at night for fear of being attacked by bears and cougars that would roam into town in search of food.  In order to remove the threat, thankfully these predators were essentially hunted to extinction.

But radical environmentalists and the Indians, still clinging to a long-dead culture, are lobbying Congress to re-enter these dangerous animals into the North Cascades of Washington State.  They have already re-entered wolves and grizzlies into the northern Rocky Mountain States and wolves into Northeastern Washington State.  Once more, man is confronted with dangerous predators that kill their livestock and pose a considerable risk to their domestic animals and themselves.  This has led to the unwritten law of “Shoot, Shovel and Shut up.”  One Idaho rancher didn’t heed the law and was forced to kill a grizzly because it was coming too close to his penned livestock and his young children.  Thinking he was doing the right thing, he called the authorities to come remove the carcass.  The authorities quickly arrested him for killing an endangered species.

Many years ago, under the Judge George Boldt decision, the Indians were granted 50% of the Eastern Pacific salmon harvest in Washington State every year in perpetuity, allegedly in compliance with ancient Indian treaties.  We concede that they should have received some percentage of the salmon harvest, but hardly 50%.  The Indians couldn’t possibly eat all the salmon they catch, so they sell the salmon to the white man and rake in huge profits.  This sounds more like reparations than adhering to alleged treaty rights.  Evidently, we didn’t win that war.

To catch 50% of the salmon, the Indians arrange a set of three nets across a stream or river.  The nets are staggered in such a manner that requires the salmon to perform a zigzag in order to escape the nets.  Obviously, most of the spawning salmon are caught in the nets.  In contrast, the evil white man is not granted the same privilege as the Indians and must catch salmon by rod and reel, with the exception of commercial fishing at sea.  But even commercial fishing by the white man is heavily restricted.

Other requirements to placate the Indians have also been signed into law by a government that suffers from a collective guilty conscience for what was done to the Indians as the white man conquered a continent and turned a nation into the most free and productive country, the likes of which has never been seen in all of human history.

For example, one fairly recent requirement was that all road crossings over any salmon-bearing stream or river must be converted to an environmentally designed fish and habitat crossing.  These prefabricated or poured-in-place concrete structures are very expensive.  Some of them cost over a million dollars.  Who gets to pay for these monstrosities, the white man, of course?  Can you just imagine the number of stream or river crossings there are in Washington State?  They number in the tens of thousands.  It will take years to accomplish the task.  Meanwhile road closures and other inconveniences for the white man continue unabated, all in the name of pandering to the Indians and environmentalists and to satisfy one more government insanity for a fish that isn’t really endangered.

Environmentalists have declared the Eastern Pacific Salmon as endangered, requiring huge sums of public money for habitat restoration.  But if you include hatchery salmon along with wild salmon, they aren’t threatened or endangered at all.  The environmentalists and the Indians want none of that because the hatchery salmon will inter-breed with the wild salmon and that just won’t do.

Salmon are a food source, pure and simple.  What difference does it make whether hatchery salmon inter-breed with wild salmon?   The final, genetically modified species, will still taste good.

The U.S. Fish and Wildlife and Non-Governmental Organizations (NGO’s) have teamed up to kill hatchery salmon returning to the hatchery, all on your dime.  That makes sense, doesn’t it?  What about the public money spent on building the hatcheries?

As we mentioned earlier in this article, now the Indians, in collusion with the environmentalists, are lobbying the government to start entering grizzly pairs into the North Cascades, with the goal of having some 200 to 400 dangerous, carnivorous grizzly bears roaming freely near growing cities and towns.  That’s insane!

When we fished the mountains of Washington State years ago, the worst danger we would face was from fairly timid black bears, thanks to our early settlers.  Now when we take our children and grandchildren into the mountains for a taste of the wilderness, we can come face to face with the third largest land predator on the planet, third only to the polar bear and the Alaskan Brown bear.  If in such an encounter, we should kill one of these giant predators with the large-caliber handgun we will now be forced to carry into the mountains for protection and get caught standing over the dead carcass, we will be immediately arrested for killing an endangered species.  However, if one of our children or grandchildren is mauled, killed, or eaten by the grizzly, who is responsible for the injury or the gruesome death and half-eaten body?  Who will pay the medical bills or the funeral?  Which environmentalist or branch of government will step up to reimburse the surviving victims for their loss?  Who will console them in their grief?  Environmentalists will laugh and say, “…. just one less human is taking up space where an animal should be.”

In Eastern Washington State, where the environmentalists and your federal government have re-entered the wolf into the local wild scene, ranchers and farmers are constantly complaining about losing livestock to wolf packs.  So the government, in its infinite insanity, is setting out to cull the wolf packs. What’s that, you say?  The government is going to KILL those nice little furry animals that look like domestic dogs, for which the public paid dearly to save.  Just more insanity.

The cost of each wolf to the taxpayer is staggering.  They must be monitored and tracked by hundreds of highly-paid government employees to see if their numbers are growing and goals are being met.  But, hey!  America is a rich country.  It can afford it ….. or can it?

And when the Audubon Society pressured the federal government to list the Northwest Spotted Owl as endangered and sent over 40,000 loggers and wood product employees to look for new jobs, it was discovered that the Northwest Spotted Owl was being overrun, mated with and eaten by the Barred Owl that was migrating west from the Great Plains.  Loss of habitat had nothing to do with the Spotted Owl’s depleting numbers.  So the federal government, in its infinite insanity, decided that the only solution to save the Northwest Spotted Owl from extinction was to start killing the Barred Owl.  That makes a lot of sense, doesn’t it?  Ladies and gentlemen, it would only make sense to a highly-paid government employee, trained in our liberal/socialist colleges.

Oh, and did we mention that you are paying for this insanity, every minute of every day, day in and day out, 365 days a year, in the billions upon billions of your tax dollars?  Are you aware that there are many more species that have been designated as threatened by radical environmentalists and those species will eventually be declared endangered, in collusion with government?  No one knows what those costs will be.  We’ll tell you what species is really endangered, and that is the human species that tries to make his or her home in the rural areas of America.

What can be taken from all this is that environmentalists and the government are determined to drive every human being into big cities where they can be better controlled and leave the rural areas to the animals.  The prevailing wisdom of environmentalists is that rural life for humans is an anachronism and should be eradicated.  Environmentalists and the government are making great progress at eliminating human conduct and activity within what environmentalists and the government have determined to be only habitat for animals and plants, from which has sprung terms such as “endangered species,” “smart growth,” “sustainable development,” “wetlands,” “bio-spheres,” “wildlife corridors,” “conservation easements,” “planned cities,” “light rail,” “electric cars,” “alternative energy” and other social vagaries ginned up by the educated idiots who rule us in order to control humans to a very strict and narrow concept of behavior.  In fact, these are just other names for slavery.

As you read the news every day, the picture being painted is an image of a chicken with its head cut off, running around the barnyard, with no sense of purpose and no sense of direction because it is absent a brain.  From an insane domestic policy, an even more insane foreign policy, a draconian environmental policy and an absolutely disastrous border policy, America has become the proverbial headless chicken absent a brain.  No one is at the controls, no one seems to know how to address the ever-increasing problems, and the inmates are in charge of what has become a national nut house.   The inmates’ answer to the problems is to increase taxes, pass more strict regulations and add to government employment exponentially.  The really sad and unexplainable part of this insanity is that those in charge purport to be intelligent and wise.  Unfortunately, this is what happens to politicians when they live in a fog-enshrouded bubble filled with graft, racketeering, corruption, the ever-pervasive self-aggrandizement and dreams of personal enrichment.

So it turns out that “Indians, Wolves, Grizzlies and Other Endangered Species Insanities” are just par for the course for a nation that seems determined to disembowel itself and flush its remaining flesh and its grand experiment with freedom down the toilet.  Sadly, this whole suicidal attempt at self-destruction is driven by a flawed social policy, an insane environmental policy and an irrational guilty conscience for past national sins, fully exploited by the moneychangers and central bankers.

And we call ourselves enlightened!

One Response to "Indians, Wolves, Grizzlies and Other Endangered Species Insanities"