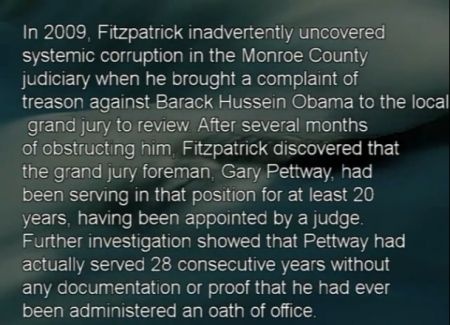 (Aug. 4, 2014) — On Sunday, The Post & Email published an article with a graphic created specially by a military veteran who has learned of the persecution of CDR Walter Francis Fitzpatrick, III (Ret.) in McMinn County, TN.

Fitzpatrick is facing sentencing on two unsubstantiated felony convictions by Judge Jon Kerry Blackwood, who is named in the title of the video, on August 19.

The veteran has now created a video which places Fitzpatrick’s story in a stirring musical setting.

McMinn County is the home of the town of Athens, where in 1946, a group of World War II veterans, some of whom returned disabled, took matters into their own hands when a corrupt sheriff and his deputies intimidated voters and stole ballot boxes in order to win the August election for Democrats, who had kept a stranglehold on local politics for nearly two decades at the time.

A reader of The Post & Email recently wrote a letter to a media outlet contending that “The Battle of Athens” is “active” and “ongoing.”

Since learning of Fitzpatrick’s convictions in early July, Lt. Col. Field McConnell (Ret.) has hosted this writer on the last three Wednesdays on his Abel Danger radio show to explain how tainted grand juries in Tennessee have led not only to Fitzpatrick’s convictions, but also the jailing and imprisonment of an unknown number of Tennesseans without proper due process.  The residents of McMinn County and the greater Tenth Judicial District have proven unresponsive to Fitzpatrick’s uncovering of systemic corruption which his former attorney, Stephen Pidgeon of Washington State, termed “hopelessly corrupted.”

Pidgeon’s 2010 statement in the Knoxville News Sentinel is no longer available on the internet, just as a story quoting Monroe County chief court clerk Martha M. Cook’s statement that a judge can select the grand jury foreman “from wherever they choose” disappeared over the weekend.

In 2009, Obama’s former communications director and Mao Tse-Tung admirer Anita Dunn proudly stated that the Obama campaign had “controlled the media.”  The murders carried out by “Chairman Mao” “surpassed any in human history.”

On March 17, 2009, Fitzpatrick filed a criminal complaint of treason against Barack Hussein Obama for deploying U.S. Army troops in Samson, AL in violation of the Posse Comitatus Act.  The U.S. Army in Europe is reportedly now expected to take orders from a German commander, a story The Post & Email is investigating.

Fitzpatrick’s current attorney, Van Irion, told radio host Dr. Laurie Roth that the decisions of the jury have criminalized the First Amendment, under which Fitzpatrick had attempted to petition his government for redress of grievances.  “I’m now afraid to go to the grand jury,” Irion said.

Almost two weeks ago, McConnell said that if Blackwood did not vacate the wrongful verdicts against Fitzpatrick before August 19, he will file a wrongful death lawsuit against Barack Hussein Obama for the approximately 2,000 servicemen and women killed under his illegitimate presidency which began on January 20, 2009.

Obama claims to have been born on August 4, 1961 at Kapiolani Women and Children’s Hospital, but his long-form birth certificate posted on the White House website on April 27, 2011 has been declared a “computer-generated forgery” by an investigation carried out by the Maricopa County, AZ Cold Case Posse affiliated with Sheriff Joe Arpaio‘s office.  At an unknown point, Arpaio opened a second criminal investigation to which he has alluded during several media interviews, including on Fox News’s “Your World with Cavuto” approximately eight weeks ago.

The posse also found that Obama’s Selective Service registration form was created on a computer, with the Selective Service System refusing to investigate the posse’s claim or provide access to the purported original, which it later said was destroyed.

Videos detailing Fitzpatrick’s treatment in neighboring Monroe County, where he first learned that grand jury foremen were judicially-appointed and retained, are here and here.  Navy veteran Darren Wesley Huff of Georgia, who also attempted to stand up to the local corruption in eastern Tennessee with Fitzpatrick, is serving the last year of a four-year federal sentence at the prison in Texarkana for a crime that “never happened.”

Fitzpatrick has long said that the actions taken against him in eastern Tennessee go “right into the White House,” just as Cold Case Posse lead investigator Mike Zullo has found that the IP numbers of certain employees at DARPA issuing propaganda on the internet trace “into the White House.”

Left-wing media have published propaganda against both Fitzpatrick and Huff, as has Tennessee law enforcement in its “Sovereign Citizen” training program issued before Huff’s trial in October 2011.  Obama regime operatives have stalked, defamed, and labeled as “racists” anyone questioning Obama’s background or policies, including this writer.

Both Arpaio and Fitzpatrick have advocated a grand jury to review the evidence of the forgery of Obama’s only proffered documentation and other crimes Obama has committed himself against the U.S. Constitution.  Fitzpatrick has attempted on many occasions to bring his case for treason against Obama to both a federal grand jury and his local grand jury in Monroe County, where he subsequently uncovered the jury-rigging which has contaminated Tennessee courts for more than three decades.

The Post & Email will be McConnell’s guest on Wednesday of this week at 3:30 p.m.