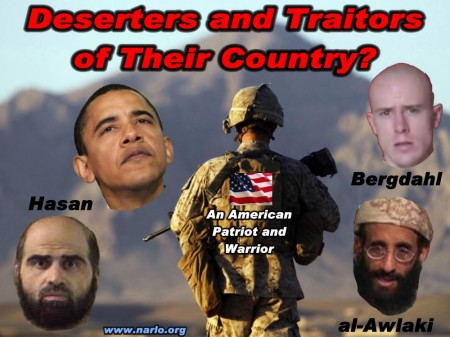 (a) Any member of the armed forces who–

1) without authority goes or remains absent from his unit, organization, or place of duty with intent to remain away there from permanently;

(2) quits his unit, organization, or place of duty with intent to avoid hazardous duty or to shirk important service;

(c) Any person found guilty of desertion or attempt to desert shall be punished, if the offense is committed in time of war, by death, or such other punishment as a court-martial may direct,

Duty! Honor! Country!  That is the unwritten code that every member of our Armed Forces must live by, or the order and discipline required for any army to be successful in battle breaks down.  A military unit is only as strong as its weakest link and one weak man can risk the lives of every other man in that unit when in training, a firefight, or defending a position.  Two egregious weaknesses come to mind.  The first is shrinking or retreating in the face of the enemy and the second is desertion in battle.

The evidence that Bowe Bergdahl deserted his post while defending a position in the mountains of Afghanistan appears to be incontrovertible.   There are just way too many witnesses to his act of cowardice for it to be an unsubstantiated allegation.  It may even be possible that Bowe Bergdahl deserted his post so that he could give aid and comfort to the enemy, making him more than just a deserter but a traitor.  The trail of writings he left behind could lead to that conclusion.  That he tried to escape during his five years in Taliban captivity, is unsubstantiated and hearsay at best.  So why has Bowe Bergdahl been given a cushy job on an Army post and is not in the Brig where he belongs like any other soldier who committed an act of treason against his country?  The fact is, Bowe Bergdahl is an army pariah and if he were put in a regular unit, he would probably be beat to a pulp or killed.  Unfortunately, the only plausible answer for this unwarranted special treatment for a deserter/traitor is presidential intervention.

Let’s forget for the moment that the President of the United States, in order to bring a deserter home from prisoner-of-war status and to put another “political feather” in the President’s cap, exchanged five (5) high-value Gitmo prisoners for Bergdahl’s release.  That is a scandal in and of itself and worthy of a separate article.

But what is an unconscionable act by this President is the special treatment being given to a known deserter.   The reason behind the special treatment is as plain as the growing nose on the President’s face.  Hoping that bringing “our brave man” home from captivity would sell well to the uninformed public that hangs on his every word, the President invested all the political capital he could muster to get the job done, even breaking the law and circumventing the Congress.  Obama is well-practiced at breaking the law.  What he didn’t expect was the massive backlash from those in the ranks of the military and the general public.  Once again, this inept, corrupt community organizer misjudged the unintended consequences of his actions.

It is a given that Obama is a master at misjudging the negative reaction to his decisions because this President is clueless and a deserter himself.  He has deserted his post as president of the United States but takes advantage of his office to take expensive vacations and hop around the country giving speeches on the taxpayer’s dime.  He has deserted the responsibility as President to fix the vexing problems that are facing this country and blames everyone but himself for those problems, especially the problems that he alone has caused.  He avoids making the hard decisions and makes speeches at Democrat fundraisers instead, or looks cool playing pool and drinking beer with his political buddies.  Of course fundraisers are easy venues for him where he can lie with impunity and no one in the audience or the press calls him on it.

All the President had to do was to pick up the telephone and call the presidents of Mexico, Guatemala, Honduras and San Salvador and tell them the money faucet of foreign aid was just turned off.  There would be no American taxpayer money sent to those countries until the river of illegal aliens was dammed up for good.  And then the President should have picked up the phone and called the Governors of the border states and ordered them to call up the National Guard in each state to defend the border, all 2,000 plus miles of it.  But no!  What did Obama do?  Like all Democrats, he demanded more money from Congress ($3.7 Billion more money) to fix a problem he alone could have fixed from the Oval Office with a few phone calls.  Once again, Obama deserts his post in the face of the enemy ….. illegal immigration.

He deserts his post when he chooses to use unauthorized executive power to go around Congress.  At this point he turns from a deserter to a dictator, which Obama has now become.  Neither Bergdahl nor Obama believes in the unwritten code of the warrior and defender of American freedom: DUTY!  HONOR!  COUNTRY!

But Bergdahl and Obama aren’t the only ones who have deserted their posts.  The mainstream media has deserted its post as well by giving Obama and others in government a free pass.  One of the major defenses the people have against a tyrannical government is an objective, neutral free press that investigates and reports on government malfeasance, misfeasance and corruption.  Sadly, that defense by the people against government has been neutered by a press that has become a member of the elite class and complicit in the corruption.

Lastly, the American people have deserted their posts by not holding government accountable to the law and rooting out corruption by whatever means because millions of Americans have also become complicit in the corruption.

What the American people have done in the relationship with their government is tantamount to giving a four-year-old the keys to operate a car and then ignoring the damage that is done after the 4-year-old loses control of the car.

All-in-all, Bergdahl, Obama, the Congress, the bureaucracies, the people and the press are guilty of dereliction of duty and are deserters from the processes necessary for a free society to function as a free society.  What we see today is the result of that dereliction of duty and desertion in the face of the enemy.  Only the people can fix it, if they have the determination and the courage to fix it by whatever means.  So far, only a few Americans have shown that kind of courage necessary to stop government; once at the Bundy ranch in Nevada, another on the road leading into Murrieta, CA and another on the Jarbidge river in northern Nevada.  Nothing will change until more of these events start occurring all over America, and occurring every day until government stands down and the people reclaim their birthright of liberty.

One Response to "Bergdahl – Obama, Deserters In The Face of The Enemy"