IS THERE ENOUGH PUBLIC SUPPORT?

The email includes the graphic to the right and reads:

Join us in boosting support for impeaching and removing Barack Obama—along with his cohorts Vice President Biden, Attorney General Holder, and other “enemies of the Constitution”—by finding at least one other person to sign the Voter Pledge To Impeach.

Co-sponsor of Pledge To Impeach

Co-sponsor of Pledge To Impeach

Please forward this message to all your friends!

RenewAmerica is currently featuring numerous articles quoting congressional candidates and former officeholders as having publicly called for the impeachment of Barack Hussein Obama and, in some cases, putative Attorney General Eric Holder.  One of the articles, published at the left-leaning Huffington Post, is titled, “Two-Thirds of Republicans Think Impeaching Obama Would Be Justified,” referring to the American electorate.

On July 7, RenewAmerica president Stephen Stone reported that after a meteoric rise in Facebook page “Likes” over April and the first two weeks of May, the rate plummeted beginning on May 14 after it posted the following political advertisement: 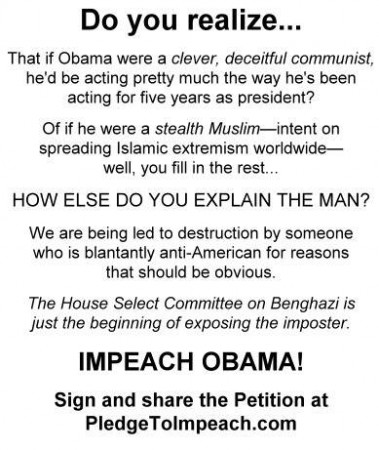 Stone said in his column that he believes Facebook interfered in the tabulation of new “Likes” to its page.  He also referred to Obama as “the usurper in the White House.”  Facebook’s founder, Mark Zuckerberg, has been an outspoken advocate of changing the nation’s immigration laws.

For Independence Day on July 4, Conservative Majority PAC posted an historical overview of the concept of “revolution,” quoting several of the Founding Fathers, and urging its readers to “elect an impeachment Congress” in November.

Founder James Madison was quoted as having said, “[I]t is proper to take alarm at the first experiment on our liberties. We hold this prudent jealousy to be the first duty of Citizens, and one of the noblest characteristics of the late Revolution. The free men of America did not wait till usurped power had strengthened itself by exercise, and entangled the question in precedents. They saw all the consequences in the principle, and they avoided the consequences by denying the principle. We revere this lesson too much soon to forget it.”

Before press time, the “Pledge to Impeach” website shows a total of 22,355 signatures calling for Obama’s impeachment on its own petition, and a total of 1,696,577 total signatures on various petitions combined.  That number rose to 1,696,710 just as publication occurred.

Pledge to Impeach’s list of offenses alleged against Obama is dated January 14 of this year, prior to the crisis which resulted from the insecurity of the southern border with Mexico began to make daily headlines.  It cites Obama for “treasonous cover-up of Benghazi;” “Plot to disarm the citizenry;’ and “Contempt for the Constitution,” among other crimes.

On Monday, ABC News published a list of “7 Republicans who disagree with Sarah Palin on Impeaching Obama,” which included Speaker of the House John Boehner; House Judiciary Committee Chairman Robert Goodlatte, who is retiring from Congress; and Rep. Cory Gardner, who interestingly was said to have met with a private investigator about the forgery of Obama’s long-form birth certificate and Selective Service registration form as determined by a nearly-three-year criminal investigation carried out by the Maricopa County, AZ Cold Case Posse.

A second criminal probe was opened at an unannounced time into matters other than the “birth certificate,” although Maricopa County Sheriff Joe Arpaio has been making statements to the media over the last two months about “sensitive investigations” which his office is conducting.

Former Vice President Dick Cheney said he believes impeaching Obama would be “a distraction.”  However, on Tuesday, some House Republicans said that the action is “debatable.”

Article II, Section 4 of the U.S. Constitution states that “The President, Vice President and all civil Officers of the United States, shall be removed from Office on Impeachment for, and Conviction of, Treason, Bribery, or other high Crimes and Misdemeanors.”

2 Responses to "“Pledge to Impeach” Pushes for Signatures on Wednesday"