In April, Harrison announced an initiative he called “Operation Pony Express” designed to provide documentation on the forgeries to congressmen in their district offices, since staffers and several congressmen themselves stated that mail entering the Washington, DC mail system is routinely delayed by the required screening process.

Harrison has spent hundreds of hours traveling to Washington, DC to meet with congressmen there as well as his own representative, Glenn Thompson, in his district office with evidence of the forgeries contained in “Sheriff’s Kits” DVDs produced by Volin more than a year ago.

A veteran of the U.S. Marine Corps, Harrison has also walked his neighborhood with a flyer he created to inform the general public about the posse’s findings, which were first announced on March 1, 2012.

Despite an untold number of constituents who have contacted their members of Congress on the Cold Case Posse’s discoveries, Congress has remained largely silent, although a few have acknowledged that the long-form birth certificate posted on the White House website since April 27, 2011 has been said to be fraudulent.  As announced by lead investigator Mike Zullo last fall, the posse’s investigation gave way to a second criminal probe launched by Maricopa County Sheriff Joe Arpaio believed to involve additional shocking revelations to be made public in the near future.

Both Pavich and Harrison traveled to Washington last November to distribute more than 200 Sheriff’s Kits to members of Congress, on some occasions viewing with congressional staffers the DVDs which contain a presentation given by Cold Case Posse lead investigator Mike Zullo in the spring of 2013 to the Constitutional Sheriffs and Peace Officers Association (CSPOA) annual conference in St. Charles, MO.

In November, Harrison and Pavich met personally with McCarthy, who gave them 30 minutes of his time on short notice.  During the meeting, Harrison and Pavich noted that McCarthy was particularly interested in the reported forgery of Obama’s Selective Service registration card, which was determined, in part, by the presence of a two-digit date stamp instead of the four-digit stamp which was found on all other registration forms from the same period obtained through FOIA requests by the posse and others. McCarthy pledged to find his own Selective Service registration form to check the number of digits appearing in the date stamp.

McCarthy had told Pavich in a subsequent meeting in his district office that “the Republican Party was not interested in investigating Obama’s fraudulent Selective Service registration form unless his [sic] constituents request it.”

In his recent mailing, Harrison included a memento of that visit. 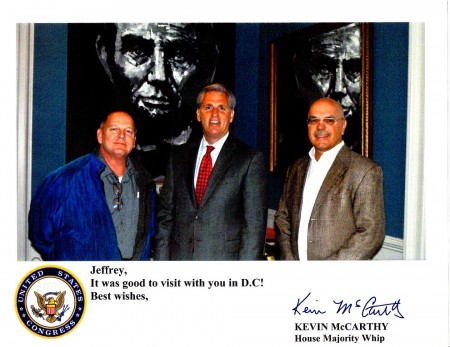 On June 27, Harrison sent The Post & Email a message detailing his idea to work with Pavich on a follow-up to their face-to-face November meeting with McCarthy: On June 25, Harrison sent a two-page letter with a template cover page to McCarthy’s Bakersfield, CA district office which began with “Enclosed in this packet is incontrovertible evidence that the certificate of live birth presented to the American public and posted on the White House website in April 2011 is a forgery.” McCarthy himself signed the green card which accompanied the certified mailing. Also included in the mailing was a printout of an article published on July 8, 2013 by Dr. Grace Vuoto entitled “Forensic findings on Obama’s birth certificate:  ‘A 100 percent forgery, no doubt about it.'”

To  find  your  Congressmen’s  address  go  too www.house.gov  of  www.senate.gov

On July 1, Pavich wrote to Harrison in an email:

Just spent a good 20 minutes plus with McCarty after tonight’s event. He is going to have Kyle Lombardi obtain a copy of his Selective Service Registration Card. He said he had not done it yet and remembered the commitment he made to us. It will get done now because I personally witnessed McCarthy give Lombardi the order. And I will stay on top of it with Lombardi.

Also, Lombardi received your binder and it is now sitting on the Congressman’s desk! Atta boy Jeff-the-janitor.

I also spent about 15 minutes with Kyle and another McCarthy staff person, Brandon Eden, Senior Legislative Assistant and edumacated (Jeff’s word) them both on the Selective Service Card and the BC. They LISTENED intently.

My strategy of playing it slow may be working out after all. That and God’s hand will expose the greatest fraud ever perpetrated in the history of America.

Obama’s constitutional eligibility for the office of president has been a topic of debate since late 2007, when MSNBC commentator Chris Matthews stated on air that Obama was “born in Indonesia” and had “a Muslim background.”  Matthews never explained how he arrived at those conclusions, but rather, asked if Democrat primary challenger Hillary Clinton would challenge Obama on his alleged foreign birth.

Article II, Section 1, clause 5 of the U.S. Constitution states that the president and commander-in-chief must be a “natural born Citizen.”  While the U.S. Supreme Court has never defined the term pointedly in an opinion, many believe that the founders intended it to mean a person born in the United States to two parents who were already its citizens.  The Article II clause contains a “grandfather” clause which allowed the founders to serve as president as “a Citizen of the United States, at the time of the Adoption of this Constitution,” although the clause can no longer be applied to anyone seeking the presidency today.

Obama claims he was born in Hawaii to a U.S.-citizen mother and Kenyan-citizen father.  Many who have studied the issue have reported that the citizenship of the father alone determines the citizenship and allegiance of the child.

Early in his political career, Obama became acquainted with former domestic terrorist Bill Ayers, who admitted on Fox News in a recent interview with anchor Megyn Kelly that after he and his wife went into hiding from the authorities, they located names of very young dead children and used them to create false identities.  Some believe that “Barack Hussein Obama” is a fraudulent identity and that his parents are not those he has identified in his public life story.

In a biography introducing his 1991 book “Dreams From My Father,” Obama’s literary agent published that he was “born in Kenya and raised in Indonesia and Hawaii.”  Inexplicably, the biography was altered in April 2007 to say that he was “born in Hawaii.”  In February of that year Obama had declared himself a candidate for the presidency.  When Breitbart revealed the alteration made by the literary agent during the 2012 campaign cycle, the agent, who is now working in a different literary agency partnership, stated that she had unwittingly made a “fact-checking error” when the biography was first published.

Obama’s veracity has been called into question on his health care law, the “humanitarian crisis” on the nation’s southern border, and the terrorist attack in Benghazi, Libya which left four Americans dead, among many other issues.

One Response to "“Operation Pony Express” Founder Continues The Mission"