Murrieta: A Line in the Sand?

WILL THE OBAMA REGIME FORCE ILLEGALS ON TOWNS WHICH SAY “NO?”

(Jul. 9, 2014) — On Sunday evening, Breitbart and other news sources reported that a federal “riot squad” had been ordered to arrive in Murrieta, CA, where citizens had protested the arrival of busloads of illegal aliens transported by the U.S. Border Patrol on Tuesday, July 1 and Friday, July 4, after which the illegals were diverted to another location.

A call was issued across the internet for those opposing the arrival of more illegals in Murrieta to gather at 11:00 a.m. PDT on Monday in anticipation of a clash with federal agents.  Along with heavy-handed federal agents, Breitbart reported that a third wave of illegals had been scheduled to arrive in Murrieta on Monday.

One observer characterized the potential confrontation as “Bundy Ranch #2” in reference to the standoff between Nevada rancher Cliven Bundy, his family and hundreds of supporters who came from all over the country to face agents from the Bureau of Land Management (BLM), which claimed that Bundy cattle were grazing in forbidden areas and that Bundy owed more than $1,000,000 in accumulated grazing fees.

BLM agents suspended their operation when armed citizens arrived in the hundreds to defend the Bundy Ranch.

Many news outlets are referring to illegal aliens as “immigrants” or “migrants.”  There has been no indication that illegals are arriving in the U.S. seeking work.

As it turned out, no riot squad arrived, and illegal aliens did not arrive in Murrieta on Monday.  However, citizens met at the designated location as scheduled, with more protesters expected later this week.

Murrieta’s mayor, Alan Long, has appeared on national media on several occasions to discuss the objections of his constituents to the attempted relocation of illegals in his town, including exposure to diseases which some of the aliens have contracted.  At least one Border Patrol agent has been infected with scabies after treating illegals in one of the makeshift holding centers and his young children, wife and fellow Border Agent exposed.

Long said that the location where the illegals were to be taken contained “jail cells” which he considered “inhumane.”

Bettina Viviano, who provided a firsthand account and photographs from Monday, related the following:

I got down to Murrietta around 10 AM today and met XXXXXXX, XXXXXX and XXXXX.  There were probably about 200 people on our side there, maybe more.  On the other side, there were almost no people – other than about 6-7 La Raza guys with Brown Shirt uniforms.  I went up to them and asked for a picture…They responded “we don’t let NAZIS take our picture.”  Pretty funny them calling ME a “Nazi” when they had the Brown Shirts on.  Oh well.
All of the media trucks were there, the cops…NO riot police, SWAT, none of that.  I was interviewed for a long time by CBS but I haven’t seen any of it, so not sure they will use it.
The buses NEVER CAME.  We waited and waited.  I was told that the police helicopters overhead assess how many protestors there are, and then make the decision to divert the buses elsewhere.  I think they took them to San Ysidro.  We were told Chula Vista, Temecula or San Ysidro but I don’t think anyone knew for sure where they went.
So, nothing big to report.  No confrontations of note, no buses.  We call it a success because we kept them out of Murrietta, but they’re still here in CA. And, as we have noticed Perry and Brewer are very openly dealing with this issue.  WHERE IS GOVERNOR MOONBEAM?

Southcom Commander Gen. John Kelly has called the crisis at the border “an existential threat to the U.S.” and stated that the U.S. military should be tasked with protecting the border. 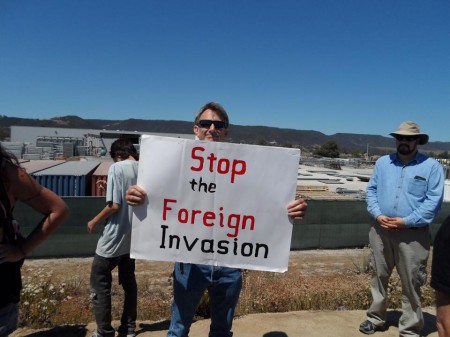 Many believe that Obama created the problem of tens of thousands of illegals crossing the southern border by indicating by executive order that young illegals would not be deported but rather, “reunited” with family members in the U.S. In 2012, Obama decreed by executive order that illegals aged 30 and under who were brought to the U.S. by their parents as children could remain in the country if they met certain conditions.

Members of Congress have begun to rebel against the restrictions which the Department of Health and Human Services (HHS) has placed on media and others wishing to tour the facilities where illegals are staying, at least three of which are on military bases.

On Sunday, a Lackland Air Force Base spokesman told The Post & Email that reporters could cover the presence of the illegals “from outside the gate.”  An Infowars reporter stated over the July 4 weekend that he had been threatened with arrest if he should continue to take video footage of the holding facility in an “unauthorized” fashion.

The facilities on the military bases belong to the Department of Defense (DOD) but reportedly were contracted for use by HHS through a “memorandum of agreement.”

Those crossing any border into the United States without permission are violating federal law, but Obama has chosen not to enforce laws with which he does not agree, including immigration and deportation laws; the Defense of Marriage Act (DOMA); and laws requiring voter identification passed by individual states.  In 2008, Obama promised to “fundamentally transform the United States of America” and has presided over the worst economic downturn since the Great Depression of the 1930s.

Illegal aliens have been transported to Baltimore, MD; Boston, MA; Ft. Sill in Oklahoma; Lackland Air Force Base in San Antonio, TX; Hartford, CT; Arizona, Florida, and Pennsylvania.  Several other cities and towns across the country have objected to and prevented the arrival of illegals in recent weeks.

Approximately 290,000 illegals have been allowed to settle in the U.S. since the beginning of the year.  Unaccompanied alien children from Central American countries cannot be instantly deported according to federal law, but rather, must be “processed” and turned over to HHS for care and transport to relatives already in the country or sponsors.  Catholic Charities and other church-affiliated groups are providing material assistance to the illegals and their sponsors.

4 Responses to "Murrieta: A Line in the Sand?"